HOME / SOCIAL/CULTURAL / How Is The CIA Still A Thing? 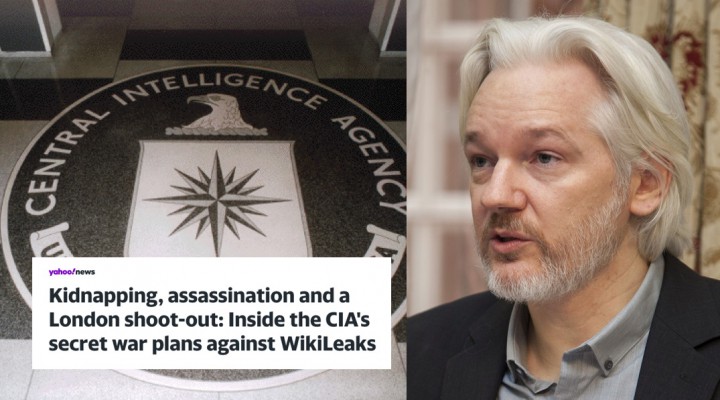 Citing “conversations with more than 30 former U.S. officials,” a new report by Yahoo News has confirmed earlier allegations that the Central Intelligence Agency not only spied on WikiLeaks founder Julian Assange and his associates, but also drew up plans for kidnapping, renditioning, and assassinating him.

These plans were reportedly made in coordination with the Trump White House as then-CIA Director Mike Pompeo and then-Deputy CIA Director Gina Haspel raged over WikiLeaks’ 2017 Vault 7 release which revealed that the CIA had lost control of an enormous digital arsenal of hacking tools. These included tools which enabled the surveillance of smartphones, smart TVs and web browsers, the hacking of computerized vehicle control systems, and the ability to frame foreign governments for cyber attacks by inserting the digital “fingerprints” of the hacking methods they employ for investigators to find. It was the single largest data leak in CIA history.

Normally we have to wait decades for confirmation that the CIA did something nefarious, and then people absurdly assume that such things no longer occur because it was so long ago, and because changing your worldview is uncomfortable. But here we are with an extensively sourced report that the agency plotted to kidnap, rendition and assassinate a journalist for publishing authentic documents in the public interest, just four years after the fact.

Journalists for Yahoo! News finally confirmed a narrative around Mike Pompeo and the CIA's war on WikiLeaks and its founder Julian Assange, which I outlined back in October 2019. It's an important report.

Which is about as spectacular a violation of virtually every value that western society claims to uphold. Particularly the assassination bit.

The authors of the story (who for the record insert their own flimsy spin insinuating ties between Russia and WikiLeaks) say it’s not known just how serious the assassination plans were taken at Langley. But they make it abundantly clear that such plans were made:

“[A]gency executives requested and received ‘sketches’ of plans for killing Assange and other Europe-based WikiLeaks members who had access to Vault 7 materials, said a former intelligence official. There were discussions ‘on whether killing Assange was possible and whether it was legal,’ the former official said.”

And that, right there, just by itself, should be reason enough to completely abolish the Central Intelligence Agency. Just the fact that this is an institution where such conversations even happen and such plans even get made, to say nothing of the obvious implication that they wouldn’t have such conversations and make such plans if they did not act on them from time to time.

I just can’t get over how this claim was openly confirmed by a mainstream journalism investigation and the public response has been “Oh wow what an alarming news story,” instead of, “Okay well the CIA doesn’t get to exist then.”

I mean, is it not out-of-this-world bizarre that we just found out the CIA recently drew up plans to assassinate a journalist for journalistic activity, and yet we’re not all unanimously demanding that the CIA be completely dismantled and flushed down the toilet forever?

I’m seriously confused at the people who are opposed to abolishing the CIA?

Is the argument that they are doing good work?

How can anyone hear about the history of the CIA and what they do and be like, “I approve”

This would after all be the same lying, drug-running, warmongering, propagandizing, psychological terrorizing Central Intelligence Agency that has been viciously smashing the world into compliance with its agendas for generations. It is surely one of the most depraved institutions ever to have existed, comparable in terms of sheer psychopathy to the worst of the worst in history.

So why does it exist? Why is there still an institution whose extensive use of torture has reportedly included “Rape, gang rape, rape using eels, snakes, or hard objects, and rape followed by murder; electric shock (‘the Bell Telephone Hour’) rendered by attaching wires to the genitals or other sensitive parts of the body, like the tongue; the ‘water treatment’; the ‘airplane’ in which the prisoner’s arms were tied behind the back, and the rope looped over a hook on the ceiling, suspending the prisoner in midair, after which he or she was beaten; beatings with rubber hoses and whips; the use of police dogs to maul prisoners”?

I am of course being rhetorical. We all know why the CIA still exists. An agency which exerts control over the news media with ever-increasing brazenness is not about to start helping the public become more well-informed about its unbroken track record of horrific abuses, and if anyone in power ever even thinks about crossing them they have “six ways from Sunday of getting back at you.”

The date of the absolute last time the CIA ever did anything evil keeps getting moved forward. The CIA just casually had plans drawn up for the assassination of Julian Assange in case they decided that was something they wanted to do, but you’re a crazy conspiracy theorist if you think they might be doing other bad things right now.

The reason the latest Assange story isn’t getting more traction and causing more people to think critically about the CIA is because the US government making plans to kidnap, rendition and assassinate a journalist for telling the truth is so incomprehensibly evil that it causes too much cognitive dissonance for people to really take in. Our minds are wired to reject information which disrupts our worldview, and people who’ve spent their lives marinating in the belief that they live in a free democracy will have worldviews that are resistant to information which shows we are actually ruled by secretive power structures who laugh at our votes.

So to recap, the CIA made plans to kidnap and rendition Julian Assange and to assassinate him and his associates. The CIA also spied on Assange and his legal team, and a notoriously untrustworthy key witness for the prosecution in his case has admitted to fabricating evidence. And yet the CIA is not being burnt to the ground and its ashes scattered to the Langley winds, and the UK is still somehow proceeding right along with the US appeal to extradite Assange.

I’ve said it before and I’ll say it again: as much light as WikiLeaks has shone on the dark inner workings of the powerful over the years, the persecution of Julian Assange by those very same power structures has revealed far, far more. The more they seek to persecute him the brighter that light shines on them, making it easier and easier for us to see who they are, what they do, and how they do it.

One thought on “How Is The CIA Still A Thing?”