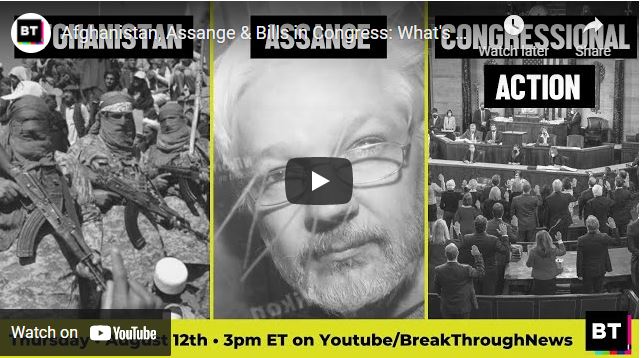 Provincial capitals in Afghanistan are falling to the Taliban at a staggering pace. What is happening there and why? Hear from Obaidullah Baheer, a lecturer at the American University of Afghanistan and Kardan & expert on negotiations with the Taliban.

The Senate passed the Biden infrastructure bill, a massive giveaway to corporations, with votes from Democrats and Republicans, including Mitch McConnell. The Democrats also have a truly meaningful anti-poverty bill that they say will be tied to the infrastructure bill. What does all of this mean and what will be required to get these important pro-worker, pro-family measures passed?

David Dayen, executive editor of The American Prospect & author, most recently of “Monopolized: Life in the Age of Corporate Power,” explains.

The UN put out a new report about climate change, and guess what? It’s extremely bad, getting worse, and definitely caused by humans? So why aren’t any media talking about the real root cause: capitalism.

Max Ajl, author of the new book “A People’s Green New Deal” & researcher with the Tunisian Observatory for Food Sovereignty, breaks it down.

“Can you imagine investing in a weapon that just gives people slight discomfort? What does that even accomplish? ‘Havana Syndrome’ is a fantasy.”@RaniaKhalek

“It’s to the point where you’ve got scientists really trying to understand what’s happening, to understand ‘Havana syndrome,’ and they can come up with anything. It’s because it’s magic, it’s a fantasy!” @RaniaKhalek

“Cuba which is struggling under sanctions has somehow managed to create this magic technology that scientists around the world can’t figure out.” @RaniaKhalek

A Green-Washed Global Economy – A Delusion That May Crash It

Biden and the ‘Yellow Brick Road’