HOME / WORLD / Shock and Awe Is a State of Mind: Millions of Deaths Have Not Made Americans Safer 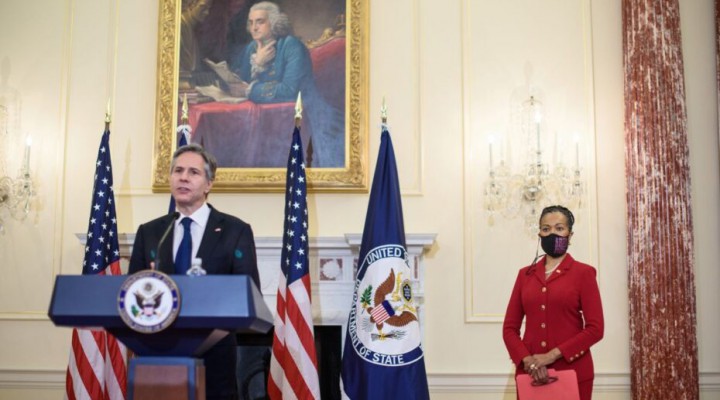 Like Pompeo and Bolton, Blinken radiates a sense of moral superiority while implementing policies that result in the deaths of innocents.

That the United States likes to use expressions like “shock and awe” or “maximum pressure” would rather suggest that there is a psychopath working in the White House basement whose full-time job is to come up with pithy one-liners to somehow euphemize government bad behavior. The expressions hardly mean anything in and of themselves apart from “tough talk” but they do serve as an alternative to having to admit in plain language to the killing of millions of people since the Global War on Terror began in 2001. “Millions?” one might skeptically ask. Yes, millions if one includes all those killed directly or indirectly as a result of the wars. Direct victims of the violence number at least 157,000 in Afghanistan, 182,000 in Iraq, 400,000 in Syria and 25,000 in Libya. And if you want to go back a few years three million Vietnamese died in 1964-1975 while 2.5 million civilians were killed in Korea. And even in the “Good War” World War 2 there were unnecessary incidents to include the nuking of Hiroshima and Nagasaki that killed 105,000, the firebombing of Tokyo adding another 97,000, and the firebombing of Hamburg and Dresden that together killed 45,000.

An estimated ten million more civilians have been displaced from their homes since 2001, creating refugee crises in both Europe and the Americas, while trillions of dollars have also been wasted or “misplaced” by the geniuses at the Pentagon and in Congress. And some might reasonably argue that the violence taking place all around the world has also been internalized in the U.S., with mass murders surfacing in the news media every few days. Some argue that the United States has nearly always been at war since its founding, which would be true, but it is also correct to note that the nature of America’s lethal engagement with the rest of the world has changed in the past twenty years. Old wars were fought to expand territory and trade or to acquire colonies for the same purpose, meaning they were intended to increase one’s power and wealth. Since 9/11, however, the wars are being fought seemingly without any real identifiable objective while also inflicting significant losses in relative wealth and power on the United States.

The fundamental problem is that the United States is being led by a political and financial elite that has completely bought into a radical view that Americans have a “manifest destiny” to create an international order that is both plausibly democratic and rules-based that would as the theory goes benefit everyone. This is, of course, nonsense as the United States itself is becoming increasingly totalitarian while it also nurtures in its bosom anti-democratic states like Saudi Arabia and Israel.

The elite that might be blamed for many of the missteps of the past twenty years includes both liberals and conservatives, all of whom for one reason or another embrace America’s mission. There is, for example, little to differentiate the world views of Donald Trump appointees Mike Pompeo and John Bolton from those of the current foreign policy incumbent Tony Blinken, as all three men believe that the use of force is the completely acceptable ultimate response to recalcitrant nations and leaders.

Blinken shares the very same trait visible in Pompeo and Bolton, that they actually radiate a sense of moral superiority while implementing policies that result in the pointless deaths of tens of thousands or hundreds of thousands and even millions of innocents. They occupy the bully pulpit as they sanctimoniously call for action regarding their “noble cause” of making the rest of the world both look like America while also deferring to Washington for direction and guidance.

Tony Blinken is not surprisingly a protégé of Bill Clinton’s former Secretary of State Madeleine Albright, who famously cackled that “it was worth it” when asked about the deaths of 500,000 Iraqi children due to U.S. enforced sanctions on food and medicine. Somehow it seems that whenever one turns over a rock in the Democratic Party up pops someone connected with the Clintons. Blinken recently produced and tweeted out a bizarre video that attempts to explain the real “humanity” behind the current Syrian policy, which he helped to define and initiate working closely with Joe Biden while serving under President Barack Obama. It is a sanctions-plus military intervention construct that has, inevitably, resulted in the deaths and the displacements into Europe and the Middle East. The policy was from the beginning clearly intended to bring about “regime change” in Damascus even though the Syrian government of President Bashar al-Assad in no way threatened the United States.

Blinken tweeted: “When I think of the suffering of the Syrian people, including Syrian children, I think of my own two children. How could we not take action to help them? Our common humanity demands it. Shame on us if we don’t. We have to find a way to do something to take action to help people.” Blinken fails to mention that the blood of the Syrian children is largely on his hands, particularly as the U.S. and Israel effectively turned loose and otherwise supported the terrorist and separatist groups that killed so many Syrian civilians while also destroying entire towns, religious centers and many irreplaceable relics of the country’s history.

So Blinken is really a good guy, thinking about his own kids while mourning the deaths of so many Syrian boys and girls? No. If he really wanted to help those children, he would have announced that U.S. troops will be withdrawn from Syria immediately. He would have lifted sanctions on the country so that it can begin serious reconstruction, together with restoring access to food and needed medicines. He did nothing of the sort and clearly is fully on board with the agenda set over the past ten years by the neocons and their Israeli masters plus the “democracy promotion” at all costs wing in his own party.

And the real problem is that Syria is not alone. Blinken and his cohorts are also encouraging Ukraine’s irredentism which is close to bringing on a war with Russia while also poking China over Taiwan. And then there is also Venezuela which appears to need a regime change and the perennial problem with Iran. And Afghanistan? Blinken should realize that all the deaths of the children that so concern him could be avoided if he and those pulling his strings would adopt a more modest agenda and stay at home. We have enough problems in the United States, but then again, the hubris which has created a pointless foreign policy would likely be channeled to drive still more of the destructive impulses that are turning the country into a collective of hostile enclaves.

0 thoughts on “Shock and Awe Is a State of Mind: Millions of Deaths Have Not Made Americans Safer”