HOME / WORLD / Rumors of War: Washington Is Looking for a Fight

Rumors of War: Washington Is Looking for a Fight 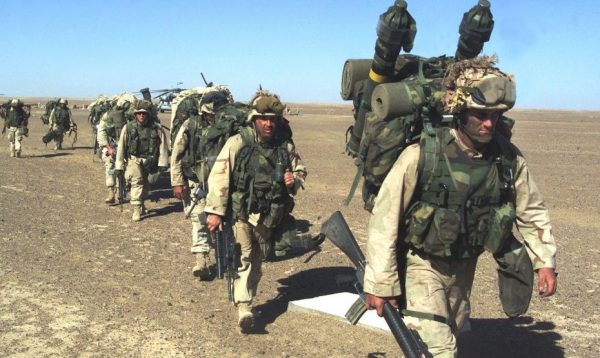 It is depressing to observe how the United States of America has become the evil empire. Having served in the United States Army during the Vietnam War and in the Central Intelligence Agency for the second half of the Cold War, I had an insider’s viewpoint of how an essentially pragmatic national security policy was being transformed bit by bit into a bipartisan doctrine that featured as a sine qua non global dominance for Washington. Unfortunately, when the Soviet Union collapsed the opportunity to end once and for all the bipolar nuclear confrontation that threatened global annihilation was squandered as President Bill Clinton chose instead to humiliate and use NATO to contain an already demoralized and effectively leaderless Russia.

American Exceptionalism became the battle cry for an increasingly clueless federal government as well as for a media-deluded public. When 9/11 arrived, the country was ready to lash out at the rest of the world. President George W. Bush growled that “There’s a new sheriff in town and you are either with us or against us.” Afghanistan followed, then Iraq, and, in a spirit of bipartisanship, the Democrats came up with Libya and the first serious engagement in Syria. In its current manifestation, one finds a United States that threatens Iran on a nearly weekly basis and tears up arms control agreements with Russia while also maintaining deployments of US forces in Syria, Iraq, Afghanistan, Somalia and places like Mali. Scattered across the globe are 800 American military bases while Washington’s principal enemies du jour Russia and China have, respectively, only one and none.

Never before in my lifetime has the United States been so belligerent, and that in spite of the fact that there is no single enemy or combination of enemies that actually threaten either the geographical United States or a vital interest. Venezuela is being threatened with invasion primarily because it is in the western hemisphere and therefore subject to Washington’s claimed proconsular authority. Last Wednesday Vice President Mike Pence told the United Nations Security Council that the White House will remove Venezuelan President Nicolás Maduro from power, preferably using diplomacy and sanctions, but “all options are on the table.” Pence warned that Russia and other friends of Maduro need to leave now or face the consequences.

The development of the United States as a hostile and somewhat unpredictable force has not gone unnoticed. Russia has accepted that war is coming no matter what it does in dealing with Trump and is upgrading its forces. By some estimates, its army is better equipped and more combat ready than is that of the United States, which spends nearly ten times as much on “defense.”

Iran is also upgrading its defensive capabilities, which are formidable. Now that Washington has withdrawn from the nuclear agreement with Iran, has placed a series of increasingly punitive sanctions on the country, and, most recently, has declared a part of the Iranian military to be a “foreign terrorist organization” and therefore subject to attack by US forces at any time, it is clear that war will be the next step. In three weeks, the United States will seek to enforce a global ban on any purchases of Iranian oil. A number of countries, including US nominal ally Turkey, have said they will ignore the ban and it will be interesting to see what the US Navy intends to do to enforce it. Or what Iran will do to break the blockade.

But even given all of the horrific decisions being made in the White House, there is one organization that is far crazier and possibly even more dangerous. That is the United States Congress, which is, not surprisingly, a legislative body that is viewed positively by only 18 per cent of the American people.

A current bill originally entitled the “Defending American Security from Kremlin Aggression Act (DASKA) of 2019,” is numbered S-1189. It has been introduced in the Senate which will “…require the Secretary of State to determine whether the Russian Federation should be designated as a state sponsor of terrorism and whether Russian-sponsored armed entities in Ukraine should be designated as foreign terrorist organizations.” The bill is sponsored by Republican Senator Cory Gardner of Colorado and is co-sponsored by Democrat Robert Menendez of New Jersey.

The current version of the bill was introduced on April 11th and it is by no means clear what kind of support it might actually have, but the fact that it actually has surfaced at all should be disturbing to anyone who believes it is in the world’s best interest to avoid direct military confrontation between the United States and Russia.

In a a press release by Gardner, who has long been pushing to have Russia listed as a state sponsor of terrorism, a February version of the bill is described as “…comprehensive legislation [that] seeks to increase economic, political, and diplomatic pressure on the Russian Federation in response to Russia’s interference in democratic processes abroad, malign influence in Syria, and aggression against Ukraine, including in the Kerch Strait. The legislation establishes a comprehensive policy response to better position the US government to address Kremlin aggression by creating new policy offices on cyber defenses and sanctions coordination. The bill stands up for NATO and prevents the President from pulling the US out of the Alliance without a Senate vote. It also increases sanctions pressure on Moscow for its interference in democratic processes abroad and continued aggression against Ukraine.”

Each Senator co-sponsor contributed a personal comment to the press release. Gardner observed that “Putin’s Russia is an outlaw regime that is hell-bent on undermining international law and destroying the US-led liberal global order.” Menendez noted that “President Trump’s willful paralysis in the face of Kremlin aggression has reached a boiling point in Congress” while Graham added that “Our goal is to change the status quo and impose meaningful sanctions and measures against Putin’s Russia. He should cease and desist meddling in the US electoral process, halt cyberattacks on American infrastructure, remove Russia from Ukraine, and stop efforts to create chaos in Syria.” Cardin contributed “Congress continues to take the lead in defending US national security against continuing Russian aggression against democratic institutions at home and abroad” and Shaheen observed that “This legislation builds on previous efforts in Congress to hold Russia accountable for its bellicose behavior against the United States and its determination to destabilize our global world order.”

The Senatorial commentary is, of course, greatly exaggerated and sometimes completely false regarding what is going on in the world, but it is revealing of how ignorant American legislators can be and often are. The Senators also ignore the fact that the designation of presumed Kremlin surrogate forces as “foreign terrorist organizations” is equivalent to a declaration of war against them by the US military, while hypocritically calling Russia a state sponsor of terrorism is bad enough, as it is demonstrably untrue. But the real damage comes from the existence of the bill itself. It will solidify support for hardliners on both sides, guaranteeing that there will be no rapprochement between Washington and Moscow for the foreseeable future, a development that is bad for everyone involved. Whether it can be characterized as an unintended consequence of unwise decision making or perhaps something more sinister involving a deeply corrupted congress and administration remains to be determined.

What If They Started a War and No One Showed Up?

0 thoughts on “Rumors of War: Washington Is Looking for a Fight”