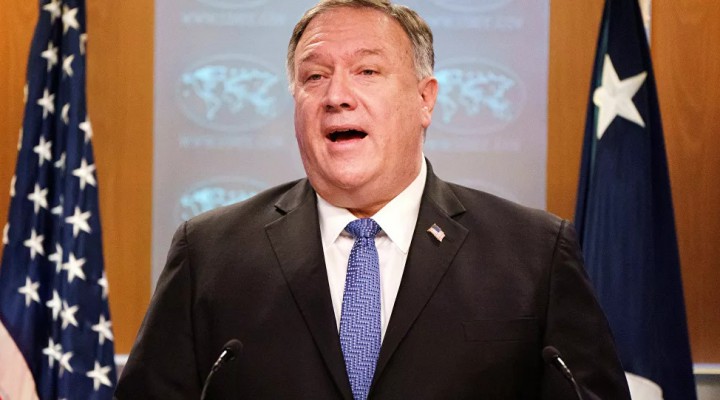 What an ignominious end to the Trump administration. Apart from the president being impeached for the second time, Trump’s top diplomat Mike Pompeo has been frantically sabotaging as many foreign relations as possible.

In recent days, Secretary of State Pompeo has been going through a to-do list like a maniac.

He accused Iran of being the new international base for Al Qaeda terrorism, thus setting up the Islamic Republic as a target for airstrikes in the name of “war on terror”. No matter that Pompeo presented zero evidence to back up his crazy, unhinged claim, and no matter that it is absurdly illogical given the historical Wahhabi-Shia antipathy. No matter too that Iran’s military alliance has been wiping out Al Qaeda-type terrorist groups in Syria and Iraq.

Clumsy Mike doesn’t do logic and intelligence. He’s a thuggish propagandist for US imperialism.

Then Pompeo moved quickly to also slap Cuba back on the US list of state sponsors of terrorism – again without any evidence – and based on the ropy accusation that Havana supports Venezuela’s elected socialist President Nicolas Maduro. The real state sponsor of terrorism here is the United States which has been economically strangling Venezuela for years and Cuba for decades.

The to-do list continued: Pompeo announced that the US was placing Yemen’s Houthi rebels on a list of foreign terror groups. That move was widely denounced by the United Nations and European states for the disastrous impact it will have on blocking humanitarian aid efforts to reach millions of Yemenis caught up in the five-year US-backed Saudi war on that country – the poorest in the Arab region.

But Mike Pompeo, who professes to be a devout Christian, appeared too busy to consider the horrendous consequences. For he was having dinner with the head of Israeli spy agency Mossad in Washington DC during which they reportedly “discussed” (that is, shared intelligence) on Israeli air strikes which were launched on eastern Syria two days later, resulting in dozens of deaths.

Next for evangelical Mike was China and Russia. Pompeo declared the opening of official contacts between the US and Taiwan, the breakaway Chinese territory, thereby furthering undermining China’s sovereignty and infuriating Beijing. As for Russia, the US State Department is lining up more economic sanctions against European companies involved in the construction of the Nord Stream 2 gas pipeline.

Ironically, when Trump was impeached again this week for inciting a deadly riot at the US Capitol on January 6, the outgoing president issued a statement condemning illegal conduct, saying “violence and vandalism has no place in our country”. Well, that’s news for Pompeo who has been filling his final days in office with violence and vandalism instead of diplomacy.

It’s obvious that Pompeo is on a final wrecking-ball mission to ensure that the new Biden administration will be encumbered in foreign relations. Of course, Biden’s team could theoretically reverse a lot of Pompeo’s final acts of madness. But because of bureaucracy in procedures that undoing could take months to achieve. Burning bridges takes time to reconstruct and rebuild confidence.

There’s no doubt the nefarious aim is to damage relations with Russia and China, for example, so badly that it will be politically difficult for Biden to repair if he even wants to. For if Biden overturns Pompeo’s latest moves, then the new Democrat president is open to vilification for “going soft” on Moscow or Beijing.

It is deplorable that US foreign policy is subject to the thuggish mentality and behaviour of Pompeo. Formerly, the head of the CIA, he once boasted that his operating credo was “cheating, lying and stealing”.

In the final days of his reign at the State Department, we are seeing this playing out with appalling recklessness.

No wonder that Pompeo had to cancel a farewell trip to Europe this week after it emerged that European foreign ministers were refusing to meet with him. It looks like even the normally obsequious European politicians couldn’t stomach the odious US diplomat any longer.

Good riddance Mike: don’t let the door hit you on the way out.