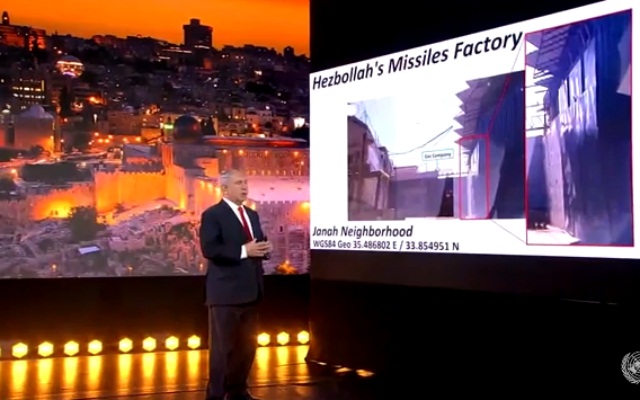 When conventional military war failed to defeat the Lebanese Hezbollah, Israel and the US adopted different tactics in the art of war whilst avoiding overt conflict in the public eye. The new tactics, whilst not excluding traditional warfare, include a group of wars or actions based on irregular formations, terrorist acts, chaos, sanctions, electronic platform warfare, media wars, propaganda, fake news, the division of society, starvation policy and engaging the enemy from within, to weaken Hezbollah before attacking and finishing it off. This is “fifth generation war”; it is the hybrid war against Hezbollah.

The United Nations delivered a message to Hezbollah from Israel stating that killing any Israeli soldier or officer would push Israel to hit ten Hezbollah targets and centres in different regions of Lebanon. Israel has provided the maps, offices and locations it intends to target, according to a leading source familiar with the matter.

Hezbollah replied to this message, that the bombing of ten targets in Lebanon will trigger an immediate response against ten Israeli military targets, command and control centres and other offices affiliated to the Israeli government. Precision missiles will be launched against Israel – said the message – without prior warning.

The Secretary-General of Hezbollah, Sayyed Hassan Nasrallah, had announced that he would kill an Israeli soldier in return for Israel killing a Hezbollah member in Syria while targeting a centre of the joint forces in the vicinity of Damascus. Since that day, that is, since July 2020, Israeli jets have not struck any Iranian command target in Syria. Furthermore, the Israeli army has been asked to conceal itself in its barracks to avoid triggering Hezbollah’s announced process of retaliation.

The commander of the IDF’s Northern Command, Major General Amir Baram, stated, “Israel is keen not to be dragged into a large-scale war with Hezbollah. It is fundamentally a war that both sides wish to avoid.”

Israel’s leaders no longer brandish the threat to take Lebanon back to the Stone Age by bombing and destroying the entire infrastructure and whole villages and cities as it did in the 2006 war. This is because Hezbollah has achieved a balance of deterrence: Israel has acknowledged that Hezbollah has missiles that can strike any target anywhere in Israel with enormous destructive power and precision.

Consequently, the theory – introduced by Hezbollah’s opponents in Lebanon to say the international community can protect Lebanon and not a heavily armed domestic group – that ”Lebanon is strong due to its weakness and incapacity to defend itself” has fallen. Indeed, the balance of deterrence has forced Israel and its ally the US to back down from the use of military force, without necessarily abandoning the project to weaken or defeat Hezbollah. This is what has pushed this strategic alliance (US and Israel) to shift towards “soft and hybrid warfare”. This new approach creates windows of opportunity to direct a military strike on Hezbollah to defeat it when the right time comes. That is possible only when Hezbollah becomes weak and without allies, supporters or a society protecting it, and indeed if Hezbollah fails to confront this hybrid war.

In 2006 during the second Israeli war on Lebanon, Israel did not achieve its goals because its intelligence failed to predict Hezbollah’s missile capabilities and readiness to hold its ground. The first surprise came at Wadi Al-Hujair with the Kornet anti-tank missiles and later with surface-to-surface missiles (when the class corvette Saar-5 was hit). Also, Hezbollah possessed the electronic capabilities to break through to the Israeli drones and other capabilities, which enabled it to know a large number of pre-prepared operations and targets in Israel’s bank of objectives. Israel has since modified its electronic protection with more advanced technology. However, electronic warfare continues: it is an ongoing battle with measures and countermeasures on both sides.

That is why it was necessary to introduce « hybrid warfare ». It needed another more effective approach to attack Hezbollah, more comprehensive. Let us take, for example, what Prime Minister Benjamin Netanyahu presented in 2018 and a few days ago to the United Nations General Assembly about the presence of Hezbollah missiles near Beirut airport and others in the Jnah area in the Lebanese capital. In the first attempt of Netanyahu, Lebanese Foreign Minister Gebran Bassil reacted by inviting Country Ambassadors to visit the site. In the second most recent case, Hezbollah invited the local and international press to visit the site and to confirm the falsity of Netanyahu’s claim. However, did Netanyahu lose the two rounds against Hezbollah or did he reach his desired objective?

I asked a Lebanese leader within the “Axis of the Resistance”: How many out of the 194 representatives at the United Nations saw Nasrallah’s response to Netanyahu’s lie? The immediate answer did not wait: “”Maybe one, two – very few. “”

Consequently, the Israeli prime minister won the disinformation war, and the powerful Zionist lobby helped him in the international media to publish his colourful pictures and folkloric output and to overlook Hezbollah’s point of view. It is likely that Netanyahu aimed in his media war to amplify the already existing negative international and domestic public opinion against Hezbollah: though in Europe, most of the leaders of the old continent have refused to consider Hezbollah as a terrorist organisation, resisting the tremendous US pressure to join the US-Israeli objective.

In Lebanon, there is a well-known saying: “There are people who, if we anoint them with filtered honey, only hate us more. Others, if we wound them and cut them to pieces, love us the more.” Lebanese society is divided between those who support Hezbollah and those who hate and voice their hatred of Hezbollah.

Whoever ideologically or by conviction supports Hezbollah will maintain the same position and never budge. As for those who support Hezbollah only circumstantially, some will turn against it or voice their criticism, particularly on social media. Many within the Lebanese Christian camp, particularly those who support the Tayyar al-Watani al-Hurr (the Free National Movement- FNM), no longer take into consideration that Hezbollah prevented the election of a President for two and a half years to impose – successfully – the FNM leader, General Michel Aoun, as President, notwithstanding domestic and international opposition. Instead, due to the US brainwashing campaign claiming that Hezbollah supports corruption or is responsible for corruption or is the ally of the Speaker Nabih Berri accused of corruption, a growing number of the FNM supporters fail to recognize the US-Israel hybrid campaign and give no more extended consideration to the alliance of two minorities (Shia and Christian) in the Levant. The expensive US economic sanctions and the decades of US-allies Lebanese-corrupted politicians overwhelm any reasoning. Daily life necessities become the priority, and alliances become marginal. The hybrid war against Hezbollah forced the society that supports the group to be entrenched and on the defensive.

The Resistance vs Israel 2006 – who has the upper hand 14 years later?

0 thoughts on “Will the Israel-US “New Wars” succeed in weakening Hezbollah?”