HOME / WORLD / Getting Away with Murder 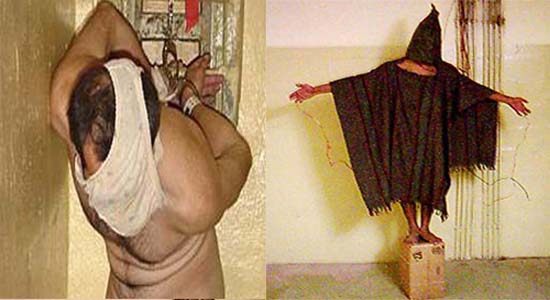 What’s a little torture between friends?
So Russian President Vladimir Putin is a “thug and a murderous dictator.” That is the judgement of President of the United States Joe Biden, delivered directly to Putin during a phone conversation, and it is backed up by a unanimous vote in the US Senate endorsing Biden’s more recently expressed view that Putin is also a “war criminal.” And if anyone doubted the sheer malignancy of America’s legislators, the viewing of a televised appeal by Ukrainian President Volodymyr Zelinskyy calling for US intervention in his war was met with cheers, shouts of approval and a standing ovation not seen in this hemisphere since Israeli Prime Minister Benjamin Netanyahu visited a Joint Congressional session in 2015. Unfortunately, in spite of all the euphoria, these comments, gestures and allegations are completely gratuitous, whether they are wholly or partly true or not, and they guarantee that a normal relationship between Russia and the United States is not likely to be reestablished no matter what the outcome to the current fighting in Ukraine.

If that is what diplomacy looks like in 2022 America then we are in serious trouble. The fact is that the US record for committing what are potentially war crimes dwarfs that of Russia or any other country with the sole exception of Israel. One only has to go through the list starting with Vietnam and continuing with Serbia, Sudan, Afghanistan, Iraq, Iran, Syria, Libya, Somalia and Yemen to appreciate the places that have been on the receiving end of either covert actions or direct intervention by US armed forces or those of its close allies. Along the way, civilians have literally died in their millions as the Pax Americana has proven to be elusive in spite of a sprinkling of more than 1,000 United States military bases worldwide. Russia is a parvenu in comparison.

It is widely understood that the United States in the post-World War 2 world, shaped the new so-called international rules-based order to benefit itself, with the designation of the dollar as the world reserve currency for energy purchases, benefitting only Washington through the Treasury Department’s ability to print money without any commodity having real value to back it up. Combine that with de facto control over the international banking system and the US has been able to render itself bullet proof when it starts wars or commits other crimes. It does not accept the jurisdiction of the International Criminal Court in the Hague, has even blocked the travel of ICC investigators to the US, and has never been held accountable for any of its questionable activities.

The end of the cold war brought about some adjustments in the international order, but, for the US, it meant an initial drive to loot the resources of Russia under Boris Yeltsin followed by Bill Clinton’s breaking the promise made to Mikhail Gorbachev not to take advantage of the changed circumstances to expand NATO to include the former Warsaw Pact nations in Eastern Europe. The current situation with Ukraine is a consequence of that continuous interference in Russia’s legitimate sphere of influence, which culminated with the regime change engineered by Washington in Kiev in 2014.

The United States is often regarded by other countries as a rogue nation, precisely because it shows little respect for the vital interests of others and is willing to manipulate international institutions in support of political and social objectives that have little or nothing to do with actual national security. Its sanctions frequently bring suffering to ordinary people in the countries targeted without affecting decisions made by the leadership. And the sanctions themselves are often poorly conceived while also being factually challengeable. The US governing elite invariably covers its misbehavior with self-serving aphorisms like the rubbish peddled by former Secretary of State Madeleine Albright, when she enthused how
“If we have to use force, it is because we are America. We are the indispensable nation. We stand tall. We see further into the future.” Yes indeed, she actually said that.

Worse still, the sustained flood of government inspired propaganda used to justify questionable actions has had the regrettable consequence of turning inward, leading to charges of “treason” directed against the few journalists and politicians who dare to challenge conventional wisdom. In the current Ukraine crisis, journalists like Tucker Carlson are under fire, as are former politicians like Tulsi Gabbard, for having committed the crime of opposing America’s deepening involvement in the fight against Russia. Indeed, the blacklisting of Russian music and books as well as foods and even vodka represent something pathological in the mainstream response to the fighting. Reliably left-wing Move-On has launched its own in-house “Creative Lab” (sic) to produce its own propaganda videos. It describes as a “debunked conspiracy theory” the Carlson claim, originally surfaced from the US government itself, that the “Biden administration was funding secret biolabs in Ukraine.” It is seeking to discredit Carlson’s “lies” which “are now fueling Putin’s relentless campaign of death and destruction in Ukraine.” It is “freedom fries” all over again.

A recent story illustrating just how deep the rot has penetrated the core of United States government and its institutions has predictably been given little coverage by the US mainstream media, but it is a tale that is appalling in its implications. The story involves a March 3rd Supreme Court ruling on a motion filed by accused terrorist Abu Zubaydah, who is currently a prisoner held in Guantanamo, though he has never actually been convicted of anything and is being nevertheless held “incommunicado for the rest of his life.” Abu Zubaydah maintained that he was tortured extensively by the Central Intelligence Agency (CIA) at a secret prison in Poland as well as in Thailand and Cuba.

The CIA captured a wounded Abu Zubaydah, a Palestinian radical, in 2002 in Pakistan, and immediately acted on the belief that he was a leader of al-Qaeda. He was tortured for several years. The CIA “waterboarded Zubaydah at least 80 times, simulated live burials in coffins for hundreds of hours,” and brutalized him through sleep deprival. They also hung him by his wrists on hooks, beat him physically and he, as a result, lost one eye. A heavily redacted CIA 683 page torture report to the Senate released in 2014, which included some details of the standard practices in place at that time, mentioned Abu Zubaydah over 1,000 times.

Abu Zubaydah was seeking release from Guantanamo based on the fact that the United States, in torturing him, had committed a war crime. His lawyers were seeking to subpoena and interview former CIA contractors to determine what exactly occurred in Poland. The US is, by the way, a signatory on the UN Convention Against Torture. The Abu Zubaydah suit may initially have appeared to be a slam-dunk given what was already known about CIA torture. The brutality was incredible. For example, newly declassified documents that surfaced last week revealed how a prisoner at an Agency “black site” in Afghanistan was used as a training prop to teach inexperienced operatives how to torture other prisoners, leaving him with serious brain damage.

Even given that and much other evidence of both illegal activity and crimes against humanity, the Supreme Court case was instead derailed by what is referred to as the “state secrets privilege.” The court’s 6–3 ruling, written by Justice Stephen Breyer included “To assert the [state secrets] privilege, the Government must submit to the court a ‘formal claim of privilege, lodged by the head of the department which has control over the matter.’” That done, the court “should exercise its traditional reluctance to intrude upon the authority of the Executive in military and national security affairs.”

The court’s ruling thereby upheld a “state secrets” claim based on the fact that the Agency has never admitted that it had secret prisons in Poland to prevent Abu Zubaydah’s lawyers from seeking subpoenas on the two psychologists who created the CIA torture program or to use those insights to learn the details of the interrogations. The court also ruled against any attempt by Polish investigators to seek to obtain US government information about the possible crimes committed at the CIA “black site” in Poland.

So welcome to the land of the free and the home of the brave…where you can be tortured at the whim of a government official, imprisoned without ever being convicted of anything, and, when you seek redress from a court, you can be told that “Too bad, it’s a state secret even though the government has already admitted having engaged in a criminal practice.” And one should not ignore in passing a related issue, the savage persecution of journalist Julian Assange for having exposed US government crimes.

An article on the case in the Los Angeles Times, one of the few to appear, puts it this way: “the government may invoke the ‘state secrets’ privilege to block former US contractors from testifying about the now well-known waterboarding and torture of prisoners held at CIA sites in Poland. By a 6-3 vote, the justices said the US government can claim a privilege of secrecy even if there is no secret.” An American Civil Liberties Union lawyer who observed the process added that “US courts are the only place in the world where everyone must pretend not to know basic facts about the CIA’s torture program. It is long past time to stop letting the CIA hide its crimes behind absurd claims of secrecy and national security harm.” Or one might observe that it’s called in the vernacular “Getting Away with Murder.”

Fear and Loathing in Washington

0 thoughts on “Getting Away with Murder”