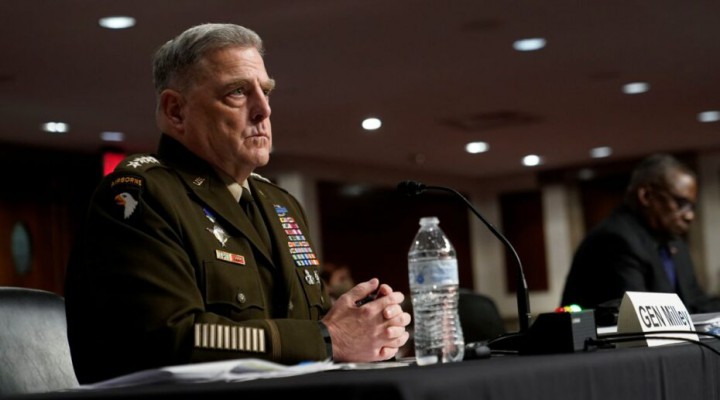 There is no solid evidence, only innuendo, that Trump ever seriously contemplated war with China, Philip Giraldi writes.

Most Americans do not know that the United States now here are approximately 900 Active-duty generals and flag officers today to lead 1.3 million troops in the combined armed forces. This is a ratio of one senior officer per every 1,400 men and women. During World War II, an admittedly different era, there were roughly twice as many flag and general officers for a little more than 12 million active duty troops a ratio of one to 6,000. In the Navy there are 32 flag officers for each ship currently in commission. In 1944, there was one flag officer for every 24 ships.

This development is referred to as “rank creep” which does not improve performance and instead clutters the chain of command by adding multiple bureaucratic layers to decision-making while also costing more due to funding the higher paygrades. And lest one be confused about why there continue to be so many flag officers, possibly concluding that they are needed to provide the leadership to fight wars, it could be pointed out that most of them will never get anywhere near combat even if the U.S. continues its belligerency on a global scale in an effort to establish and enforce its leadership of a fictional “rules based international order.”

It turns out that current Chairman of the Joint Chiefs of Staff Mark Milley was, during the latter days of the Donald Trump Administration, talking to his counterparts in China as well as to some folks in Congress who had no love for Trump. Some of the conversations were routine, but others were apparently driven by the notion that Donald Trump just might do something stupid like starting a war unless some restraints were placed on his ability to do mischief. Inevitably, there have emerged major differences of opinion regarding the propriety of what Milley was engaged in, with Democrats in general and Trump haters in particular finding no problem with the intrusion into policy-making while many Republicans have been calling for a thorough investigation to include possible consequences up to and including court-martial.

The various conversations were reported in a just released book “Peril” written by Bob Woodward and, Robert Costa and, based on a claimed 200 interviews, are generally conceded to be accurate by both sides to include the Milley camp plus the journalists involved. Some of the calls at least were made with other officials in the room and on separate phone lines, though there were also conversations with politicians like Nancy Pelosi, Speaker of the House of Representatives, that were clearly considered off-the-record as they dealt with keeping nuclear weapons out of the president’s hands.

Milley, according to the book, reportedly told the Chinese General Li Zuocheng in a back-channel phone call that had as a subject the possibility that the president might order an attack directed against China, something in the nature of a “surprise attack.” He reportedly said “General Li, you and I have known each other for now five years. If we’re going to attack, I’m going to call you ahead of time. It’s not going to be a surprise.” Milley apparently justified the action by stating that he disapproves of surprise attacks in principal and his defenders cite the example of “Pearl Harbor,” which was viewed so repugnantly by the American public that something like a war of extermination became inevitable. Unstated by the Milley supporters, though implicit in their argument, is the assumption that Donald Trump was both ignorant and a loose cannon on deck who would do something stupid like initiating a conflict with China.

Milley also shared his view that Trump had experienced a “mental decline” after the election with Nancy Pelosi in a phone call to her on January 8th, two days after the alleged insurrection at the Capitol. Pelosi reportedly demanded that Milley take the nuclear launch codes away from Trump, which admittedly he did not seek to do. On the same day Milley also reviewed procedures with the senior officers at the National Military Command Center for launching nuclear weapons, insisting that he also had to be involved. To be completely clear, Milley had no legal authority or power to insert himself into the chain of command, though “Peril” reports that he did just that and at a minimum he was acting “extra-constitutionally” in his interpretation of his government role.

But it is the outreach to China is most disturbing. It is indeed possible to regard Donald Trump negatively while at the same time responding rationally with one’s international nuclear armed adversaries. One does not know what Milley intended to do by his phone call, but “Peril” makes the case, without providing any evidence, that “American intelligence showed that the Chinese believed that Mr. Trump planned to launch a military strike to create an international crisis that he could claim to solve as a last-ditch effort to beat Joseph R. Biden Jr.” In any event, it is unlikely that the Milley phone call reassured Li of anything. Indeed, Li and the Chinese government would have only two possible responses to the threat. First would be to shut up shop, batten down the hatches, and sit still for punishment. The other option would be to preemptively strike U.S. forces in and around China which presumably would be used for the attack. Either option could easily lead to a nuclear exchange once things cease to go according to plan, presuming that the surprise attack itself was not intended to include nuclear weapons in the first place.

Colonel Richard Black observes sagely that “If the report of Milley’s intentions is accurate, he should be relieved for cause, for though he did not consummate a criminal act by making that promise, the promise was so fraught with impropriety that an officer who betrayed his government in such fashion should ever be trusted to serve. Indeed, it is likely that had his Chinese counterpart made such a promise to General Milley, he’d have been executed for doing so.”

Beyond the disruption of the chain of command and ignoring the Constitution, there are, of course, some other problems with Milley’s line of thinking. Trump has, to be sure, demonstrated enough irrational behavior to make one suspect that he is not in full possession of all his marbles, but that is not the point. He was elected president of the United States and the U.S. Constitution was set up to ensure civilian control of the military, not vice versa.

And there is no solid evidence, only innuendo, that Trump ever seriously contemplated war with China. Indeed, he ran for office pledging to end the pointless wars that Washington was engaged in in Asia and towards the end of his administration he negotiated an exit from Afghanistan, which Joe Biden then postponed before bungling the evacuation. Trump did indeed assassinate a senior Iranian General and also launched cruise missiles against Syria based on bad intelligence, but otherwise his record is significantly better than that of his predecessor Barack Obama who both initiated and broadened the policy of assassinating American and Afghan citizens overseas by drone and also was party to the overthrow of the Libyan government while also conniving to replace the government of Ukraine.

In any event, in America war is clearly playing politics by other means. President Joe Biden has already declared that he has full confidence in Milley. Several Republican Senators, including Marco Rubio, have instead demanded that he be fired. Given the fact that at least one of the general’s phone calls to his Chinese counterpart could have started a war that might have gone nuclear, he should at least have the integrity to resign and take up his expected board appointment with a defense contractor.