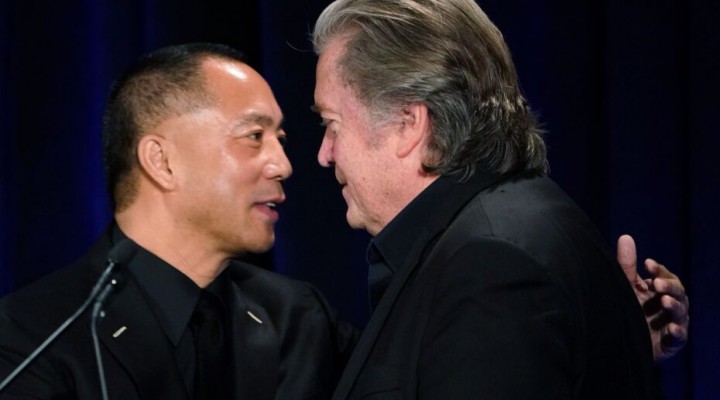 Bannon and the Guo scammers and a host of know-nothing, bigoted Republican politicians and pundits are fueling public acceptance of Biden’s warmongering towards China.

Steve Bannon, a political guru for Donald Trump’s Republican political base, is hooked up with a Chinese billionaire whom China wants the U.S. to extradite over corruption charges. It may seem a strange pairing for Bannon given his rabid anti-China views. A few years back, Bannon was predicting the U.S. would be soon at war with China.

Together, their ventures are a mix of financial embezzlement and peddling conspiracy theories that are winding up fears and misapprehensions about the Covid-19 pandemic as well as fueling an anti-China public climate in the U.S.

Bannon and Guo Wengui are double-act scam artists who are not only ripping off hapless Republican voters for money. The pair and their shady media ventures are adept at spreading spurious notions about the last presidential election, the pandemic, vaccines, and China.

Guo’s media businesses were fined earlier this month $539 million by U.S. authorities for illegal stock market trading. The companies had been accused of fleecing thousands of investors with unregulated digital securities known as G-Coins or G-Dollars. As part of the settlement with the Securities and Exchange Commission, three media businesses belonging to Chinese-born billionaire Guo Wengui are compelled to return funds to investors and desist from further trading business.

“Thousands of investors purchased GTV stock, G-Coins, and G-Dollars based on the respondents’ solicitation of the general public with limited disclosures,” said Richard Best, Director of the SEC’s New York regional office. “The remedies ordered by the Commission today, which include a fair fund distribution, will provide meaningful relief to investors in these illegal offerings.”

Welcome to the scam world set up by Guo and Steve Bannon. Guo fled from China in 2014 to avoid a crackdown against business corruption under President Xi Jinping. An international arrest warrant has been issued by Beijing based on a litany of charges for fraud and other serious crimes. Several of Guo’s former associates have been jailed in China.

While living in exile in the United States, Guo has established himself as a prominent critic of the Chinese government, accusing it of corruption and abuse of power. As an anti-China mouthpiece, this is no doubt why the U.S. government seems to tolerate Guo and has declined to facilitate Beijing’s requests for extradition.

Guo’s profile and media businesses took off after he teamed up with Steve Bannon, the right-wing former aide to Donald Trump. Bannon received a $1 million fee as a media and political consultant to Guo. Bannon has a huge following among the Republican base and is still influential in Trump’s inner circle. By enlisting Bannon, Guo was able to bring his media companies and business scams to a much wider audience.

Bannon, as with many other Trump acolytes, has shown a flair for scamming the public over dodgy fundraising projects. In August 2020, he was arrested while on Guo’s 150ft luxury yacht off the Connecticut coast. He was charged with embezzling millions of dollars by promoting a fund to build a border wall with Mexico on private land. The case didn’t go to court because Trump pardoned Bannon in his last days as president.

Guo and Bannon have openly declared that their mission is to bring down the Chinese Communist Party. In June 2020, they set up a “New Federal State of China” whose overt purpose is regime change in Beijing. A so-called “embassy” has even been opened in New York.

To mark the one-year anniversary of the declared Chinese government-in-exile, a major media event in New York was sponsored by Guo. Speaking at the gala were Bannon, Rudy Giuliani, Michael Flynn and other Trump associates. Among the rallying themes were claims that Donald Trump is the rightful president of the United States as well as impending war with China. This seditious cabal is strangely tolerated by U.S. authorities.

To harbor an enemy, self-declared government on U.S. soil is a provocation to the People’s Republic of China as well as a violation of international law. We can be sure that if the shoe was on the other foot, the United States would be fulminating against an “act of war”.

Guo and Bannon have a lucrative symbiotic relation. Guo’s billionaire funds pay for Bannon’s Neo-fascist political projects to get Trump re-elected. And Bannon brings millions of Republican voters into Guo’s media web that up until recently when the SEC caught up, had succeeded in embezzling billions of dollars.

To keep the whole snake-oil show on the road, Guo and Bannon whip up the Trump base with all sorts of conspiracy theories. Thus, it goes, the 2020 presidential election was a steal, Joe Biden is a radical leftist, Trump is going to be reinstated one day soon as rightful president, the Covid-19 pandemic is a hoax, vaccines are poisonous and are part of the Chinese Communist Party takeover of American society. Guo and Bannon overlap with the QAnon crazy conspiracy network. They reinforce one another in an evil vice of ignorance, delusion, and fear-mongering.

Meanwhile, Republican voters are dying in droves because they refuse to get vaccinated or wear protective masks which the Republican snake-oil salesmen refer disparagingly to as “face diapers”. Even right-wing radio talks show hosts are dying disproportionately from the disease that they have been dismissing as “fake news”.

The biggest worry, however, is the poisoning of relations between the U.S. and China by these scam artists and their cultic influence.

On U.S. domestic politics, Covid-19, vaccines, and other issues, the Biden Democratic administration may be at odds with Bannon and the right-wing Trump base. But in terms of foreign policy towards China, there is bipartisan convergence. Biden is pushing an equally hostile agenda tantamount to beating war drums. The new American military pact with Britain and Australia – unveiled last week known as AUKUS – is but the latest provocation.

Unlikely as it might seem, Bannon and the Guo scammers and a host of know-nothing, bigoted Republican politicians and pundits are fueling public acceptance of Biden’s warmongering towards China.

Bannonism: A Clear and Present Danger to the Planet