HOME / WORLD / Are There Israelis in the U.S. Government?

Are There Israelis in the U.S. Government? 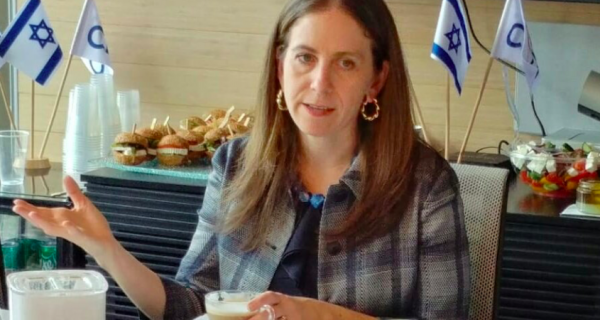 Given Israel’s clearly demonstrated ability to manipulate and manage American government at all levels, there is inevitably considerable speculation about the presence of actual Israeli citizens in the federal and state bureaucracies. Very often, lists that appear on the internet focus on Jewish legislators, but in reality, few of them are likely to have Israeli citizenship even if they regularly exhibit what amounts to “dual loyalty” sympathy for the Jewish state. Nevertheless, Jews who are Zionists are vastly overrepresented in all government agencies that have anything at all to do with the Middle East.

There are, of course, some Jews who flaunt their identification with Israel, to include current Senate Minority Leader Chuck Schumer who describes himself as “protector” of Israel and former Senator Frank Lautenberg, frequently referred to as “Israel’s Senator.” One might also include Rahm Emanuel, former White House Chief of Staff and mayor of Chicago, who reportedly served as a volunteer in the Israeli Army, and Doug Feith, who caused so much mischief from his perch at the Pentagon in the lead-up to the Iraq War. Feith had a law office in Jerusalem, suggesting that he might have obtained Israeli citizenship.

To be sure there are many non-Jews in the American government who have hitched their star to the Israeli wagon because they know it to be career enhancing. One only has to observe in action Senator Lindsay Graham, former U.N. Ambassador Nikki Haley and perhaps the most revolting of all, Florida governor Ron DeSantis, who ran for office proclaiming that he would be the most pro-Israel governor in the United States. After being elected he traveled to Jerusalem with a large entourage of Zionist supporters to hold the first meeting of the Florida state government cabinet. According to some authorities in Florida, the meeting was supposed to be held in the state capitol Tallahassee and was therefore illegal, but DeSantis was undaunted and made clear to observers where his loyalty lies.

Part of the problem is that Israeli citizenship is obtained virtually automatically upon application by any Jew and once obtained it is permanent, only revocable by petitioning the Israeli government. Nor is there anything equating to a list of citizens, so it is possible to be an Israeli citizen while also holding American citizenship and no one would be the wiser. As the United States permits American citizens to have multiple passports and therefore nationalities there is, in fact, nothing in U.S. law that prohibits being both Israeli and American.

Having dual nationality only a real issue when the policies of one citizenship conflict with the other, and that is precisely where the problem comes in with Israeli dual nationals in the United States, particularly if they wind up in the government. Frank Lautenberg, for example, was responsible for the “Lautenberg amendment” of 1990 which brought many thousands of Russian Jews into the United States as refugees, even though they were not in any danger and were therefore ineligible for that status. As refugees, they received significant taxpayer provided housing, subsistence and educational benefits.

Some other current officials in the government who may or may not have dual nationality and are in policy making positions might include U.S. (sic) Ambassador to Israel David Friedman and the recently resigned international negotiator Jason Greenblatt. Both have long histories of pro-Israel advocacy to include supporting illegal settlements on the West Bank. And there is also someone named Jared Kushner, whose ties to Israel are so close that Benjamin Netanyahu once slept in his father and mother’s apartment. If the metric to judge the actions – and loyalty – of these individuals is their willingness to place American interests ahead of those of Israel, they all would fail the test.

That said, there was one individual dual national who truly stood out when it came to serving Israeli interests from inside the United States government. She might be worthy of the nickname “Queen of Sanctions” because she was the Department of the Treasury’s Under Secretary for Terrorism and Financial Intelligence (OTFI), who handed the punishment out and had her hand on the throttle to crank the pain up. She is our own, unfortunately, and also Israel’s own Sigal Pearl Mandelker, and is its wonderful to be able to say that she finally resigned last week!

OFTI’s website proclaims that it is responsible for “safeguarding the financial system against illicit use and combating rogue nations, terrorist facilitators, weapons of mass destruction (WMD) proliferators, money launderers, drug kingpins, and other national security threats,” but it has from its founding been really all about safeguarding Israel’s perceived interests. Grant Smith notes how “the secretive office has a special blind spot for major terrorism generators, such as tax-exempt money laundering from the United States into illegal Israeli settlements and proliferation financing and weapons technology smuggling into Israel’s clandestine nuclear weapons complex.”

To be sure, sanctions have been the key weapon in the ongoing unending war against perceived “enemies” like Russia and Venezuela, but they have been laid on most promiscuously in the case of Iran, Israel’s number one enemy du jour, which has also been demonized by Washington even though it is no threat to the United States. And it should be recognized that sanctions are not a bloodless exercise used to pressure a recalcitrant government. They disproportionately affect the poor and powerless, who starve and are denied access to medicines, but they rarely have any impact on those who run the government. Five-hundred thousand Iraqi children died from sanctions imposed by President Bill Clinton and his vulturine Secretary of State Madeleine Albright. Currently, Iranians and Venezuelans are dying, by some estimates in their tens of thousands.

Once on a sanctions list administered by the Treasury’s Office of Foreign Assets Control (OFAC), there is no actual appeal process and no getting off the hook unless Mandelker said so. And anyone who has any contact with the sanctioned entity can be in for trouble, including American citizens who will find themselves no longer having rights to free speech and association. The terms for violation of sanctions used by OFAC are “transaction” and “dealing in transactions,” broadly construed to include not only monetary dealings or exchanges, but also “providing any sort of service” and “non-monetary service,” including giving a presentation at a conference or speaking or writing in support of a sanctioned group or individual.

OFAC has a broad mandate to punish anyone who has anything to do with any Iranian group or even any individual as Iran is considered a country that is “comprehensively sanctioned.” To cite just one example of how indiscriminately the sanctions regime works, Max Blumenthal has described how the FBI recently, acting under Mandelker’s orders, warned a number of Americans who had planned on speaking at an Iranian organized conference in Beirut that they might be arrested upon their return.

Mandelker was born in Israel and largely educated in the United States. She is predictably a lawyer. She has never stated how many citizenships she holds while repeated inquiries as to whether she retains her Israeli citizenship have been ignored by the Treasury Department. It is not clear how she managed to obtain a security clearance given her evident affinity to a foreign country. The position that she held until last Wednesday was created in 2004 by George W. Bush and is something of a “no Gentiles need apply” fiefdom. Its officials travel regularly on the taxpayer’s dime to Israel for consultations and also collaborate with pro-Israel organizations like AIPAC, WINEP and the Foundation for the Defense of Democracies (FDD). Mandelker’s predecessor was Adam Szubin and he was preceded by David Cohen and, before that, by the office’s founder Stuart Levey, who is currently Group Legal Manager and Group Managing Director for global bank HSBC. Since its creation, OFTI has not surprisingly focused on what might be described as Israel’s enemies, most notably among them being Iran.

Mandelker was clear about her role, citing her personal and business relationship with “our great partner, Israel.” Referring to sanctions on Iran, she has said that “Bad actors need money to do bad things. That is why we have this massive sanctions regime … Every time we apply that pressure, that crunch on them, we deny them the ability to get that kind of revenue, we make the world a safer place.” In support of the pain she is inflicting to no real purpose other than to force complete Iranian capitulation, she cites alleged Iranian misdeeds, foremost of which is its alleged threatening of Israel. She also condemns Iran’s support for Syria’s Bashar al-Assad, who she claims has killed his own people with chemical weapons, an assertion that has proven to be untrue.

Mandelker touted her personal history as a claimed child of the seemingly ubiquitous “holocaust survivors.” In a speech at the Holocaust Museum in April she claimed that her parents went underground in Eastern Europe: “They were hiding underground, in forests, in ditches and under haystacks. I grew up hearing their stories, including about moments of great courage, some of which resulted in survival and others that ended in death.”

To be sure, Mandelker and her predecessors have been going after Iran’s money since the 1979 Islamic Revolution, constantly devising new restrictions and rules to make it hard for Tehran to do business with any other country. In 2006 Levey’s office began to focus on cutting off Iran from the global financial system. Currently the Trump administration is applying what it describes as “maximum pressure” in seeking to sink Iran’s economy by blocking all oil exports. Since May, any country buying Iranian oil has been vulnerable to secondary sanctions by Washington, all set up and choreographed by Mandelker.

That Mandelker and company have been engaging in economic warfare with a country with which the United States is not at war seems to have escaped the notice of the media and Washington’s chattering class, not surprisingly as Israel is a beneficiary of the policy. And the fact that the way sanctions are being enforced against American citizens is clearly unconstitutional has also slipped by the usual watchdogs. Sigal Mandelker was a prime example of why anyone who is either an actual dual national or plausibly possesses dual loyalty should not hold high office in the United States government and is a blessing that she is gone, though one imagines she will be replaced by another Zionist fanatic. If anyone wonders why Israel gets away with what it does the simple answer would be that there are just too many people at the federal level who think that serving Israel is the same as serving the United States. That is just not so and it is past time that the American public should wake up to that fact.

Fighting Back Against the Israel Lobby

0 thoughts on “Are There Israelis in the U.S. Government?”