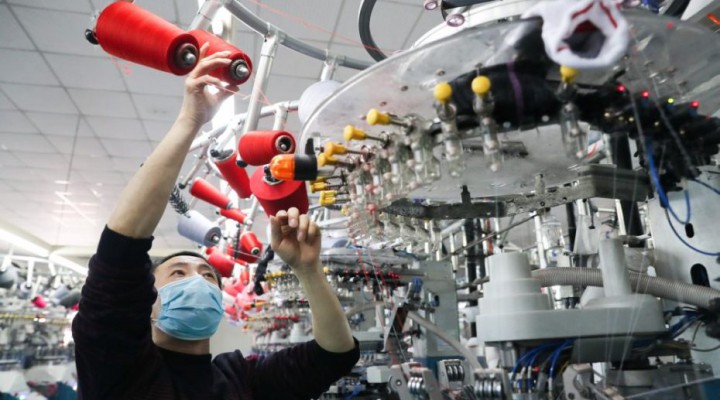 So President Trump, the self-declared business genius, wants to cut off the whole relationship with China and “save America $500 billion a year”. That’s what he told Fox News this week in an interview referring to the US trade deficit with China. The fault of the chronic US trade deficit with China (and much of the world), like that of the Covid-19 crisis in America, is classic 3-D Trump: dissembling, distracting and dealing in guilt-projection.

Trump is a simpleton, a narcissistic buffoon and a demagogue whose unhinged megalomaniac rantings are an incendiary incitement to war. Like all demagogues he has the knack for making complex problems sound as if they can be easily fixed – by scapegoating others.

He rails against trade “supply chains” coming from China supposedly costing Americans $500 billion a year in trade deficit. As if corporate America gave away its manufacturing base to China like a gift. American capitalists like Trump’s daughter and retail-fashion owner Ivanka took their businesses to China to avail of cheap labor and to export back to the US at huge profit.

Cutting off China’s exports to the US will hit American consumers with crippling price inflation which will impoverish them even more in their low-wage, job-insecure dependency on cheap goods. Just like when Trump’s earlier tariff war with Beijing resulted in US farmers getting clobbered from reprisal curbs on their exports of soybean and corn to China. The president has a unique way of hurting Americans whom he claims to champion.

Unfortunately, Trump’s confrontational demagoguery towards China appears to be working to his benefit, at least on the short-term. Pew Research Center surveys that anti-China sentiment among Americans is at an all-time high. Ever since Trump entered the White House, he has taken public hostility towards China to ever-higher levels, with his toxic talk about how America is being “cheated” and “ripped-off”.

With the Covid-19 pandemic, however, Trump’s rhetoric is going off the charts with irrationality and intemperance. He is blaming China for record deaths and economic destruction of America with unfounded accusations of Beijing “covering up” the outbreak of the disease and thus, allegedly, deceiving the US into crisis. “They could have stopped it at source,” he claims with irresponsible innuendo.

Trump has caricatured the crisis as the “worse attack since Pearl Harbor”. This is reckless, incendiary claptrap. But, deplorably, it seems to be galvanizing Americans into viewing China as an enemy.

In his interview with Fox, Trump ramped up the animus and got personal. With regard to China’s President Xi Jinping, Trump said: “I don’t want to speak to him.”

The smear campaign to demonize China is being laid on with a grease gun. Trump and his knuckle-dragging Secretary of State Mike Pompeo accuse China of cover-up and releasing the virus from a laboratory. Trump has even implied this was done to wreck his re-election as president in November. The irony of it: Trump-the-Russiagate-victim, now playing the Chinagate card.

Washington politicians want to cancel American debt obligations to China which holds about $1 trillion in US treasury bonds. This is simply America self-licensing itself for grand larceny.

US senators are pushing to impose economic sanctions on China if it does not satisfy their demands for it to prove innocence over the fabricated allegations about cover-up. Given the high-handed American arrogance not to mention meat-headed stupidity of its politicians, China’s “guilt” is a foregone conclusion. Then what? War?

The Trump administration is threatening to with-hold over half a trillion dollars in federal pension-fund investments in China’s stock market. More chicanery under the guise of scapegoating; and further war moves. Just who is cheating and ripping off whom here?

And it’s not just the Trump administration knuckle-draggers who are wielding the clubs. The supposedly more liberal Democrats are also ramping up the anti-China rhetoric in a bid to out-do Trump in jingoistic China-bashing. The New York Times, often opposed to Trump, has leaned into his demagogic demonization of China by hyping up baseless claims from the FBI that Chinese hackers are stealing US research into vaccines for Covid-19. That inevitably insinuates China is harming America’s recovery from the Covid-19 crisis. Yet more cause for war.

American belligerence towards China has a sinister bipartisan front – as it always has.

So-called liberals and Democrats blame the Republican president for mismanaging the Covid-19 pandemic. They are correct in this. America’s shocking death toll from the disease is unprecedented. It exposes the immense failure of US society, its economy and government. But this isn’t entirely Trump’s fault. He is but the uncouth face of a failed system that has been cratering over many decades from its hyper consumer-capitalism dystopia. Rather than dealing with that reality, the Democrats and corporate media will join in Trump’s cynical campaign to scapegoat China for all of America’s deep-seated ills.

The only redemption for the US is a deep and honest dive into the corruption of its political ruling class and their system of oligarchic enrichment, their obscene militarism, and tyranny of “national security” suppression of democracy.

To avoid that kind of democratic reckoning, Trump and all the other Washington wastrels and sociopaths will do everything they can to distract with slanderous incitement against China, no matter how ridiculous and no matter how reckless.

Cutting off the whole relationship with China? Trump is delusional and dangerous. He and the whole American political class are willing to jeopardize world security, even to the point of starting a war, as long as that conceals their corrupt rule.

Sadly, though, Americans seem so brainwashed and misinformed, the ruling charlatans may get away with murder, just like they’re accustomed to do.