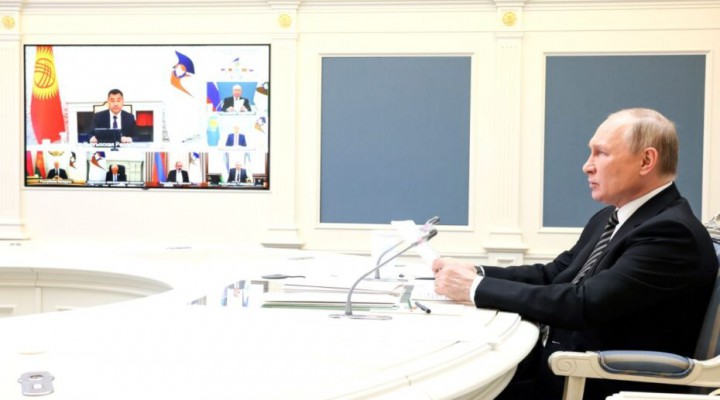 The Eurasian Economic Forum has shown once again that this high-speed – economic integration – train has already left the station.

The first Eurasian Economic Forum, in Bishkek, Kyrgyzstan, took place this week at a very sensitive geopolitical juncture, as Russian Foreign Minister Sergei Lavrov keeps stressing that, “the West has declared total war against us, against the entire Russian world. Nobody even hides this now.”

It’s always important to remember that before Maidan in 2014, Ukraine had the option to become a full member of the Eurasian Economic Union (EAEU), and even balance it with a loose association with the EU.

There was much rumbling that the proceedings would be jeopardized by the serial sanctions packages imposed on Russia by the collective West. There’s no question that some EAEU members – such as Kazakhstan – seem to be more worried about the effects of the sanctions than about fine-tuning business with Russia. Yet that’s not the point.

The crucial point is that by 2025 they have to harmonize their legislation concerning financial markets. And that’s directly connected to what the executive body of the EAEU, led by Sergey Glazyev, is working on, extensively: designing the lineaments of an alternative financial/economic system  to what the West would rather coin as Bretton Woods 3.

The Eurasian Economic Forum was established by the Supreme Eurasian Economic Council explicitly to further deepen economic cooperation between EAEU members. No wonder the official theme of the forum was Eurasian Economic Integration in the Era of Global Shifts: New Investment Opportunities, focusing on strategic development in the industrial, energy, transport, financial, and digital areas.

So Many Converging Strategies

President Putin’s speech to the plenary session was quite revealing. To really appreciate the scope of what’s implied, it’s important to remember that the Greater Eurasian Partnership concept was presented by Putin in 2016 at the St. Petersburg Economic Forum, focused on a “more extensive Eurasian partnership involving the Eurasian Economic Union” and including China, Pakistan, Iran and India.

Putin stressed how the drive for developing ties “within the framework of the Greater Eurasian Partnership” (…) “was not the political situation but global economic trends, because the centre of economic development is gradually – we are aware of this, and our businesspeople are aware of this – is gradually moving, continues to move into the Asia-Pacific Region.”

He added, “in the current international conditions when, unfortunately, traditional trade and economic links and supply chains are being disrupted”, the Greater Eurasian Partnership “is gaining a special meaning.”

Putin established a direct connection not only between the Greater Eurasian Partnership and EAEU members but also “BRICS members such as China and India”, “the Shanghai Cooperation Organization, ASEAN and other organizations.”

And that’s the core of the whole, ongoing, multi-layered process of Eurasia integration, with the China-led New Silk Roads intersecting with the Eurasia Economic Union, the SCO, BRICS+, and other converging strategies.

Lavrov this week said that Argentina and Saudi Arabia want to join BRICS, whose next summer in China is being meticulously prepared. Not only that: Lavrov mentioned how quite a few Arab nations want to join the SCO. He was careful to describe this process of converging alliances as “not antagonistic”.

Putin for his part was careful to define the Greater Eurasian Partnership as “a big civilizational project. The main idea is to create a common space for equitable cooperation for regional organizations”, changing “the political and economic architecture on the entire continent.”

Thus, the necessity to “draft a comprehensive strategy for developing large-scale Eurasian partnership”, including “a roadmap for industrialization”. That translates in practice as developing “engineering centers and research centers. This is inevitable for any country that wants to increase its economic, financial, and ultimately political sovereignty. It is inevitable.”

Yaroslav Lissovolik  at the Valdai Club is one of the top analysts tracking how this convergence may profit the whole Global South. He stresses that among the “variability and diversity in the platforms that may be launched by Global South economies, the most sizeable and comprehensive of which could include the aggregation of CELAC (Latin America), African Union (Africa)”, and the SCO in Eurasia.

And an even more diverse set of “regional blocs that targets deeper integration could feature a BRICS+ platform that comprises the South African Development Community (SADC), MERCOSUR, BIMSTEC”, the China-ASEAN free trade agreement, and the EAEU.

The Eurasian Economic Forum has shown once again that this high-speed – economic integration – train has already left the station. It’s quite enlightening to notice the sharp contrast with the endless doom and gloom afflicting a collective West prone to inflation, energy shortages, food shortages, fictional “narratives” and the defense of neo-Nazis under the banner of liberal “democracy”.

One thought on “The Eurasian Economic Union Steps Up”