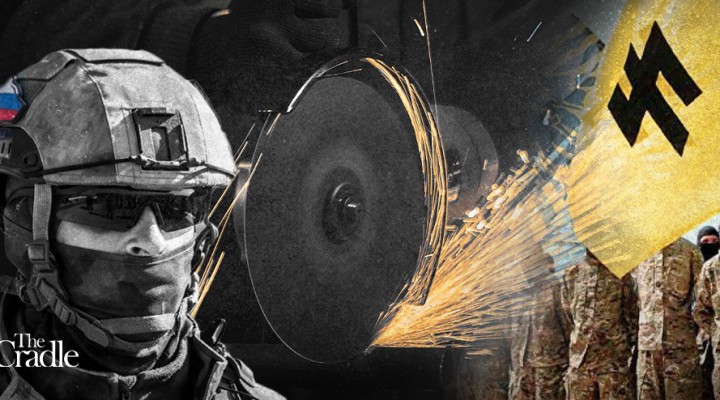 Mariupol was battered by Ukraine’s right-wing Azov battalion well before Moscow launched its military ops. In Russian hands, this strategic steelworks port can transform into a hub of Eurasian connectivity.

Mariupol, the strategic Sea of Azov port, remains in the eye of the storm in Ukraine.

The NATO narrative is that Azovstal – one of Europe’s biggest iron and steel works – was nearly destroyed by the Russian Army and its allied Donetsk forces who “lay siege” to Mariupol.

The true story is that the neo-Nazi Azov batallion took scores of Mariupol civilians as human shields since the start of the Russian military operation in Ukraine, and retreated to Azovstal as a last stand. After an ultimatum delivered last week, they are now being completely exterminated by the Russian and Donetsk forces and Chechen Spetsnaz.

Azovstal, part of the Metinvest group controlled by Ukraine’s wealthiest oligarch, Rinat Akhmetov, is indeed one of the biggest metallurgic plants in Europe, self-described as a “high-performance integrated metallurgical enterprise that produces coke and sinter, steel as well as high-quality rolled products, bars and shapes.”

Amidst a flurry of testimonials detailing the horrors inflicted by the Azov neo-Nazis on Mariupol’s civilian population, a way more auspicious, invisible story bodes well for the immediate future.

Russia is the world’s fifth largest steel producer, apart from holding huge iron and coal deposits. Mariupol – a steel Mecca – used to source coal from Donbass, but under de facto neo-Nazi rule since the 2014 Maidan events, was turned into an importer. Iron, for instance, started to be supplied from Krivbas in Ukraine, over 200 kilometers away.

After Donetsk solidifies itself as an independent republic or, via referendum, chooses to become part of the Russian Federation, this situation is bound to change.

Azovstal is invested in a broad product line of very useful stuff: structural steel, rail for railroads, hardened steel for chains, mining equipment, rolled steel used in factory apparatus, trucks and railroad cars. Parts of the factory complex are quite modern while some, decades old, are badly in need of upgrading, which Russian industry can certainly provide.

Strategically, this is a huge complex, right at the Sea of Azov – which is now, for all practical purposes, incorporated into the Donetsk People’s Republic, and close to the Black Sea. That implies a short trip to the Eastern Mediterranean, including many potential customers in West Asia. And crossing Suez and reaching the Indian Ocean, customers all across South and Southeast Asia.

So the Donetsk People’s Republic, possibly part of the future Novorossiya, and even part of Russia, will be in control of a lot of steel-making capacity for southern Europe, West Asia and beyond.

One of the inevitable consequences is that it will be able to supply a real freight railroad construction boom in Russia, China and the Central Asian ‘stans.’ Railroad construction happens to be the privileged connectivity mode for Beijing’s ambitious Belt and Road Initiative (BRI). And, crucially, of the increasingly turbo-charged International North South Transportation Corridor (INSTC).

So, mid-term, Mariupol should expect to become one of the key hubs of a boom in north-south routes – INSTC across Russia and linking with the ‘stans’ – as well as major BRI upgrades east-west as well as sub-BRI corridors.

The INSTC’s main players are Russia, Iran and India – which are now, pos-NATO sanctions, in advanced interconnection mode, complete with devising mechanisms to bypass the US dollar in their trade. Azerbaijan is another important INSTC player, yet more volatile because it privileges Turkey’s connectivity designs in the Caucasus.

The INSTC network will be progressively interconnecting also with Pakistan – and that means the China-Pakistan Economic Corridor (CPEC), a key BRI hub, which is slowly but surely expanding to Afghanistan. Foreign Minister Wang Yi’s impromptu visit to Kabul late last week was to advance the incorporation of Afghanistan to the New Silk Roads.

All that is happening as Moscow – extremely close to New Delhi – is simultaneously expanding trade relations with Islamabad. All three, crucially, are Shanghai Cooperation Organization (SCO) members.

So the grand North-South design spells out fluent connectivity from the Russian mainland to the Caucasus (Azerbaijan), to West Asia (Iran) all the way to South Asia (India and Pakistan). None of these key players have demonized or sanctioned Russia despite ongoing US pressures to do so.

Strategically, that represents the Russian multipolar concept of Greater Eurasian Partnership in action in terms of trade and connectivity – in parallel and complimentary with BRI because India, eager to install a rupee-ruble mechanism to buy energy, in this case is an absolutely crucial Russia partner, matching China’s reported $400 billion strategic deal with Iran. In practice, the Greater Eurasia Partnership will facilitate smoother connectivity between Russia, Iran, Pakistan and India.

The NATO universe, meanwhile, is congenitally incapable of even recognizing the complexity of the alignment, not to mention analyze its implications. What we have is the interlocking of BRI, INTSC and the Greater Eurasia Partnership on the ground – all notions that are regarded as anathema in the Washington Beltway.

All that of course is being designed amidst a game-changing geoeconomic moment, as Russia, starting this Thursday, will only accept payment for its gas in rubles from “unfriendly” nations.

Parallel to the Geater Eurasia Partnership, BRI, since it was launched in 2013, is also progressively weaving a complex, integrated Eurasian network of partnerships – financial/economic, connectivity, physical infrastructure building, economic/trade corridors. BRI’s role as a co-shaper of institutions of global governance, including normative foundations, has also been crucial, much to the despair of the NATO alliance.

Yet only now the Global South, especially, will start to observe the full spectrum of the China-Russia play across the Eurasian sphere. Moscow and Beijing are deeply involved in a joint drive to de-westernize globalist governance, if not shatter it altogether.

Russia from now on will be even more meticulous in its institution-building, coalescing the Eurasia Economic Union (EAEU), the SCO and the Collective Security Treaty Organization (CSTO) – a Eurasian military alliance of select post-Soviet states – in a geopolitical context of irreversible institutional and normative divide between Russia and the West.

At the same time, the Greater Eurasia Partnership will be solidifying Russia as the ultimate Eurasian bridge, creating a common space across Eurasia which could even ignore vassalized Europe.

Meanwhile in real life, BRI, as much as the INSTC, will be increasingly plugged into the Black Sea (hello, Mariupol). And BRI itself may be even prone to re-evaluation in its emphasis of linking western China to western Europe’s shrinking industrial base.

There will be no point in privileging the northern BRI corridors – China-Mongolia-Russia via the Trans-Siberian, and the Eurasian land bridge via Kazakhstan – when you have Europe descending into medieval dementia.

BRI’s renewed focus will be on gaining access to irreplaceable commodities – and that means Russia – as well as securing essential supplies for Chinese production. Commodity-rich nations such as Kazakhstan, and many players in Africa, shall become the top future markets for China.

In a pre-Covid loop across Central Asia, one constantly heard that China builds plants and high-speed railways while Europe at best writes white papers. It can always get worse. The EU as occupied American territory is now descending, fast, from center of global power to the status of inconsequential peripheral player, a mere struggling market in the far periphery” of China’s “community of shared destiny.”