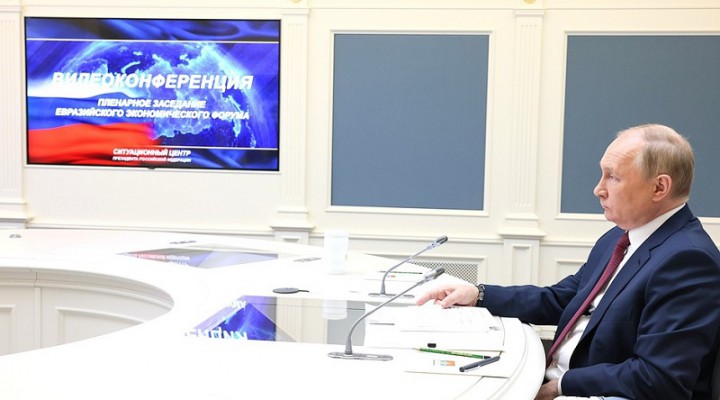 The Greater Eurasian Partnership represents Russia’s premier project for creating a genuinely rules-based international order modeled off the principles enshrined in the UN Charter. Its Eurasian Economic Union core will serve as the proof of concept for this literally world-changing grand strategy that’ll revolutionize the supercontinent’s political and economic architecture. The end result is that both of them will accelerate the global systemic transition to multipolarity.

President Putin addressed the inaugural Eurasian Economic Forum (EAEF) on Thursday by video alongside his counterparts from the Eurasian Economic Union (EAEU), which also includes Armenia, Belarus, Kazakhstan, and Kyrgyzstan. The US-led Western Mainstream Media (MSM) is making much ado about him “thanking God” that some foreign companies have left his country since the unprecedented sanctions imposed upon Moscow for its ongoing special military operation in Ukraine, but that ignores a lot of the other important things that he said during his speech. The present piece will summarize it since the Russian leader also touched upon his country’s grand geo-economic strategy in Eurasia.

He began by reminding everyone that relevant Eurasian integration processes have no connection to recent events since they predate them by approximately a decade. President Putin also reaffirmed that comprehensively developing ties with Russia’s post-Soviet neighbors has always been its top priority. It’s impossible to isolate his country, he said, and it’ll continue engaging with the Asia-Pacific region within which economic developments are most dynamic. This direction will also help Russia cushion itself from the self-inflicted counterproductive consequences of the US-led West’s anti-Russian sanctions, which have led to high inflation, unemployment, and serious supply chain disruptions, among other problems.

Those economic-financial weapons will be wielded not just against Russia and perhaps one day soon also China, President Putin predicted, but against any country that practices an independent foreign policy. Nevertheless, he’s certain that the US-led West won’t be able to stop the irreversible global systemic transition to multipolarity no matter how desperately they try. One means of increasing the chances of a targeted country surviving this Hybrid War onslaught is to prioritize import substitution, which the Russian leader acknowledged that his civilization-state hasn’t comprehensively done but still lauded its successes thus far over the past few years, which he said helped protect its sovereignty.

It was within this context that he rhetorically thanked God for some foreign firms leaving Russia because he said that domestic ones will replace them. President Putin also observed how this will prioritize import substitution in the spheres where it occurred, which will help Russia make up for lost time and prior shortcomings in those industries. Agricultural and industrialization roadmaps have already been prepared by the EAEU with a digital-technological one in the pipeline, all of which will strengthen economic complementarity between the bloc’s members. Trade in national currencies is already occurring as is the use of non-SWIFT payment systems, which protects them from external shocks.

In the larger context, President Putin envisions the EAEU functioning as the core of the Greater Eurasian Partnership (GEP), which refers to his country’s grand strategy from the middle of the last decade whereby it aims to comprehensively integrate with the rest of the supercontinent. Recent events have led to Russia naturally prioritizing its Global South partners, particularly China and India but also the others in ASEAN and the SCO too. He believes that more proactive engagement with them its necessary in order to bring this ambitious vision to reality, to which end he proposed export and trade houses, a Eurasian insurance company, special transborder economic zones, and business councils.

The most important part of President Putin’s speech came near the end when he said that “It is time to draft a comprehensive strategy for developing large-scale Eurasian partnership. It must reflect the key international challenges facing us, determine future goals and contain instruments and mechanisms for achieving them. We must consider further steps in developing our system of trade and investment agreements, in part, with the participation of the SCO, ASEAN and BRICS member countries…It would be no exaggeration to say that Greater Eurasia is a big civilisational project.” This then led to his final conclusion that will now follow.

In the Russian leader’s own words, “The Greater Eurasian Partnership is designed to change the political and economic architecture and guarantee stability and prosperity on the entire continent – naturally, taking account of the diverse development models, cultures and traditions of all nations.” In other words, the GEP represents Russia’s premier project for creating a genuinely rules-based international order modeled off the principles enshrined in the UN Charter. Its EAEU core will serve as the proof of concept for this literally world-changing grand strategy that’ll revolutionize the supercontinent’s political and economic architecture. The end result is that the GEP will accelerate the global systemic transition.

The US-led Western MSM deliberately omitted any reporting about this most pivotal part of his speech, instead obsessing over the rhetorical thanks that he gave to God for the departure of some foreign firms under illegal sanctions pressure. The reason behind this de facto censorship is likely because they want to keep their targeted audience ignorant of Russia’s leading role in the global systemic transition to multipolarity. After all, these “politically inconvenient” facts debunk the “official narrative” alleging that the sanctions have led to Russia’s “global isolation”. That’s obviously a lie since Russia is now actively preparing to make its EAEU the centerpiece of multipolarity as proven by President Putin’s speech.

Terror from Balochistan: a menacing tool to disrupt Sino-Pakistani economics