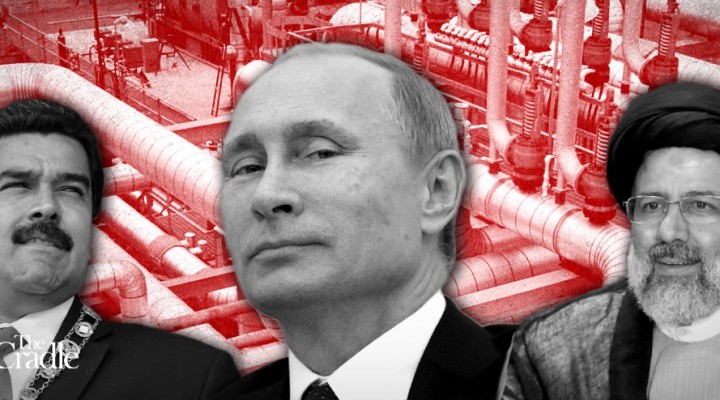 Washington’s sanctions on Moscow will destroy Europe, not Russia

The battlefield is drawn.

The official Russian blacklist of hostile sanctioning nations includes the US, the EU, Canada and, in Asia, Japan, South Korea, Taiwan, and Singapore (the only one from Southeast Asia). Notice how that ‘international community’ keeps shrinking.

The Global South should be aware that no nations from West Asia, Latin America or Africa have joined Washington’s sanctions bandwagon.

Moscow has not even announced its own package of counter-sanctions. Yet an official decree “On Temporary Order of Obligations to Certain Foreign Creditors,” which allows Russian companies to settle their debts in rubles, provides a hint of what’s to come.

It works like this: to pay for loans obtained from a sanctioning country exceeding 10 million rubles a month, Russian companies do not have to make a transfer. They ask for a Russian bank to open a correspondent account in rubles under the creditor’s name. Then the company transfers rubles to this account at the current exchange rate, and it’s all perfectly legal.

Payments in foreign currency only go through the Central Bank on a case-by-case basis. They must receive special permission from the Government Commission for the Control of Foreign Investment.

What this means in practice is that the bulk of the $478 billion or so in Russian foreign debt may “disappear” from the balance sheets of western banks. The equivalent in rubles will be deposited somewhere, in Russian banks; but western banks, as things stand, can’t access it.

It is debatable whether this straightforward strategy was the product of those ‘non-sovereignist’ brains gathered at the Russian Central Bank. More likely, there has been input from influential economist Sergei Glazyev, also a top former advisor to Russian President Vladimir Putin on regional integration. Here is a revised edition, in English, of his groundbreaking essay Sanctions and Sovereignty, which I have previously summarized.

Meanwhile, Sberbank confirmed it will issue Russia’s Mir debit/credit cards co-badged with China’s UnionPay. Alfa-Bank, the largest private bank in Russia, will also issue UnionPay credit and debit cards. Although only introduced five years ago, 40 percent of Russians already have a Mir card for domestic use. Now they will also be able to use it internationally, via UnionPay’s enormous network. And without Visa and Mastercard, commissions on all transactions will remain in the Russia-China sphere. De-dollarization, in effect.

The Iran sanctions negotiations in Vienna may be reaching the last stage – as acknowledged even by Chinese diplomat Wang Qun. But it was Russian Foreign Minister Sergei Lavrov who introduced a new, crucial variable into Vienna’s final discussions.

Lavrov made his eleventh-hour demand quite explicit: “We have asked for a written guarantee … that the current [Russian sanctions] process triggered by the United States does not in any way damage our right to free and full trade, economic and investment cooperation and military-technical cooperation with the Islamic Republic.”

As per the Joint Comprehensive Plan of Action (JCPOA) agreement of 2015, Russia receives enriched uranium from Iran and exchanges it for yellowcake and, in parallel, is reconverting Iran’s Fordow nuclear plant into a research center. Without Iranian enriched uranium exports there’s simply no JCPOA deal. It boggles the mind that US Secretary of State Blinken does not seem to understand that.

Everyone in Vienna, sidelines included, knows that for all actors to sign on the JCPOA revival, no nation must be individually targeted in terms of trading with Iran. Tehran also knows it.

So what’s happening now is an elaborate game of Persian mirrors, coordinated between Russian and Iranian diplomacy. Moscow’s Ambassador to Tehran, Levan Dzhagaryan, attributed the fierce reaction to Lavrov in some Iranian quarters to a “misunderstanding.” This will all be played out in the shade.

An extra element is that according to a Persian Gulf intel source with privileged Iranian access, Tehran may be selling as many as three million barrels of oil a day already, “so if they do sign a deal, it will not affect supply at all; only they will be paid more.”

The US administration of President Joe Biden is now absolutely desperate: today it banned all imports of oil and gas from Russia, which happens to be the second largest exporter of oil to the US, behind Canada and ahead of Mexico. The US big Russian-energy ‘replacement strategy’ is to beg for oil from Iran and Venezuela.

So, the White House sent a delegation to talk to Venezuelan President Nicolás Maduro, led by Juan Gonzalez, the White House’s top Latin America adviser. The US offer is to “alleviate” sanctions on Caracas in exchange for oil.

The United States government has spent years – if not decades – burning all bridges with Venezuela and Iran. The US destroyed Iraq and Libya, and isolated Venezuela and Iran in its attempt to take over global oil markets – just to end up miserably trying to buy out both and escape from being crushed by the economic forces it had unleashed. That proves, once again, that imperial ‘policy makers’ are utterly clueless.

Caracas will request the elimination of all sanctions on Venezuela and the return of all its confiscated gold. And it seems like none of this was cleared with ‘President’ Juan Guaido, who since 2019, has been the only Venezuelan leader “recognized” by Washington.

Oil and gas markets, meanwhile, are in total panic. No western trader wants to buy Russian gas; and that has nothing to do with Russia’s state-owned energy behemoth Gazprom, which continues to duly supply customers who signed contracts with fixed tariffs, from $100 to $300; (others are paying over $3,000 in the spot market).

European banks are less and less willing to grant loans for energy trade with Russia because of the sanctions hysteria. A strong hint that the Russia-to-Germany gas pipeline Nord Stream 2 may be literally six feet under is that importer Wintershall-Dea wrote off its share of the financing, de facto assuming that the pipeline will not be launched.

Everyone with a brain in Germany knows that two extra Liquefied Natural Gas (LNG) terminals – still to be constructed – will not be enough for Berlin’s needs. There is simply not enough LNG to supply them. Europe will have to fight with Asia over who can pay more. Asia wins.

Europe imports roughly 400 billion cubic meters of gas a year, with Russia responsible for 200 billion of this. There’s no way Europe can find $200 billion anywhere else to replace Russia – be it in Algeria, Qatar or Turkmenistan. Not to mention its lack of necessary LNG terminals.

So, obviously, the top beneficiary of all the mess will be the US – which will be able to impose not only their terminals and control systems, but also profit from loans to the EU, sales of equipment, and full access to the whole EU energy infrastructure. All LNG installations, pipelines and warehouses will be connected to a sole network with a single control room: an American business dream.

Europe will be left with reduced gas production for its dwindling industry; job losses; decreasing quality of life standards; increased pressure over the social security system; and, last but not least, the necessity to apply for extra American loans. Some nations will go back to coal for heating. The Green Parade will be livid.

What about Russia? As a hypothesis, even if all its energy exports were curtailed – and they won’t be; their top clients are in Asia – Russia would not have to use its foreign reserves.

The Russophobic all-out attack on Russian exports also targets palladium metals – vital for electronics, from laptops to aircraft systems. Prices are skyrocketing. Russia controls 50 percent of the global market. Then there are noble gases – neon, helium, argon, xenon – essential for production of microchips. Titanium has risen by a quarter, and both Boeing (by a third)  and Airbus (by two thirds) rely on titanium from Russia.

Oil, food, fertilizers, strategic metals, neon gas for semiconductors: all burning at the stake, at the feet of Witch Russia.

Some westerners who still treasure Bismarckian realpolitik have started wondering whether shielding energy (in the case of Europe) and selected commodity flows from sanctions may have everything to do with protecting an immense racket: the commodity derivatives system.

After all, if that implodes, because of a shortage of commodities, the whole western financial system blows up. Now that’s a real system failure.

The key issue for the Global South to digest is that the ‘west’ is not committing suicide. What we have here, essentially, is the United States willfully destroying German industry and the European economy – bizarrely, with their connivance.

To destroy the European economy means not allowing extra market space for China, and blocking the inevitable extra trade which will be a direct consequence of closer exchanges between the EU and the Regional Comprehensive Economic Partnership (RCEP), the world’s biggest trade deal.

The end result will be the US eating European savings for lunch while China expands its middle class to over 500 million people. Russia will do just fine, as Glazyev outlines: sovereign and self-sufficient.

American economist Michael Hudson has concisely sketched the lineaments of imperial self-implosion. Yet way more dramatic, as a strategic disaster, is how the deaf, dumb and blind parade toward deep recession and near-hyperinflation will rip what’s left of the west’s social cohesion apart. Mission accomplished.