HOME / Economy / The Sanctions Bite the West, Not Russia 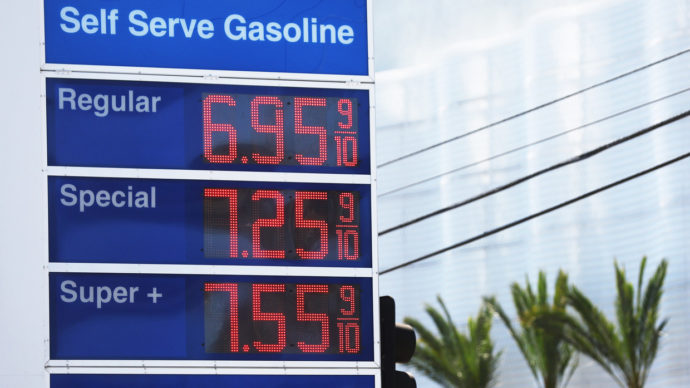 The Covid lockdowns re-awoke inflation, something the Federal Reserve had been unable to do for more than a decade of massive money creation.  The lockdowns drove prices up by curtailing production.

The sanctions have added to these supply disruptions.  One question is: how much of the higher oil and gasoline prices is due to reduced supply, and how much to the scare factor and big oil jumping at the chance to raise prices behind the cover of sanctions and “disrupted markets.”

Biden’s announcement of a ban on US imports of Russian oil and gas is being ignored by Germany and other US puppet governments.  In Germany, such a ban would mean the shutdown of German industry.  As the Russians have refused to avail themselves of the power to shut off the gas, the sharp rise in natural gas prices in Europe is not supply-related.  Russia could cause the complete capitulation of Europe if she turned off the gas, but Russia hasn’t yet figured that out.  Indeed, if the Kremlin could think outside the box, or wasn’t married to globalism, or wasn’t brainwashed by its neoliberal economists that Russia needs foreign exchange, the Kremlin could have achieved its Ukraine goal without invading simply by cutting off all energy to Europe.

As the US imports no gas from Russia and Russian oil imports are only 7% of US oil, Biden’s Ban hasn’t much to do with the high prices.  Moreover, Biden has announced that he is opening the US strategic oil reserve to make up for the banned imports, and the US is talking to its designated enemy, Venezuela, about that country filling in for the missing Russian oil.

The reason is that Venezuela’s oil, like Russia’s, is heavy oil.  Therefore, Biden’s Ban is not just falling on energy prices paid by the US consumer.  It is also falling on the American refineries that process heavy oil.  Without the Russian oil, the refineries face the lost revenues from being closed.

Higher oil prices don’t just drive up gasoline and heating oil prices. They drive up transportation costs — airlines, trucking, shipping.  Transportation costs feed into all costs.  Plastics are also affected.  In other words, the price of oil affects just about everything, including vacation resorts and restaurants.

World markets, fearful of what the dumbshits in Washington might do next, are driving up mineral prices.  Nickel prices are going through the roof as Russia is a major global supplier.

Biden, the titular head of an empire that has terrorized the populations of 6 countries in the 21st century, slaughtering, dispossessing, and dislocating millions of people, calls Putin a “tyrant” for protecting Russian lives in Ukraine and Russian national security.  The WH Idiot joins the idiot Democrat senator Chris Coons from Delaware in claiming, falsely, that the sanctions under which Americans will suffer are “the cost of standing up for freedom” and to stop “tyrants like Putin” from being able “to use fossil fuels as weapons against other nations.”  Think about this for a moment. It is the US with sanctions that is using fossil fuels as weapons against other nations, including its own, not Putin who continues the gas and oil flows to Europe.  The WH idiot is so totally stupid that he doesn’t even realize that it is he who is the cause of the trouble, not Putin.

Here is Russian deputy prime minister Alexander Novak explaining that Russia  is a faithful business partner that fulfills its contracts and does not use energy as a weapon:

0 thoughts on “The Sanctions Bite the West, Not Russia”