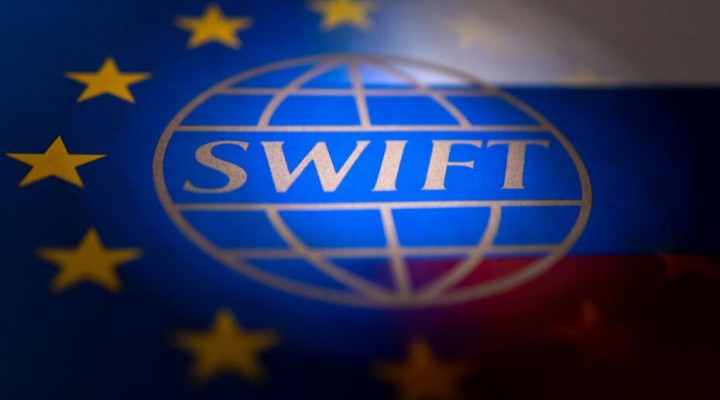 Biden, finally, has his foreign policy ‘success’: Europe is walling itself off from Russia, China, and the emerging integrated Asian market.

In its triple strike of sanctions on Russia, the EU initially was not looking to collapse the Russian financial system. Far from it: Its first instinct was to find the means to continue purchasing its energy needs (made all there more vital by the state of the European gas reserves hovering close to zero). Purchases of energy, special metals, rare earths (all needed for high tech manufacture) and agricultural products were to be exempted. In short, at first brush, the sinews of the global financial system were intended to remain intact.

The main target rather, was to block the core to the Russian financial system’s ability to raise capital – supplemented by specific sanctions on Alrosa, a major player in the diamond market, and Sovcomflot, a tanker fleet operator.

Then, last Saturday morning (26 February) everything changed. It became a blitzkrieg: “We’re waging an all-out economic and financial war on Russia. We will cause the collapse of the Russian economy”, said the French Finance Minister, Le Maire (words, he later said, he regretted).

That Saturday, the EU, the U.S. and some allies acted to freeze the Russian Central Bank’s foreign exchange reserves held overseas. And certain Russian banks (in the end seven) were to be expelled from SWIFT financial messaging service. The intent was openly admitted in an U.S. unattributable briefing: It was to trigger a ‘bear raid’ (ie. an orchestrated mass selling) of the Rouble on the following Monday that would collapse the value of the currency.

The purpose to freezing the Central Bank’s reserves was two-fold: First, to prevent the Bank from supporting the Rouble. And secondly, to create a commercial bank liquidity scarcity inside Russia to feed into a concerted campaign over that weekend to scare Russians into believing that some domestic banks might fail – thus prompting a rush at the ATMs, and start a bank-run, in other words.

More than two decades ago, in August 1998, Russia defaulted on its debt and devalued the Rouble, sparking a political crisis that culminated with Vladimir Putin replacing Boris Yeltsin. In 2014, there was a similar U.S. attempt to crash the Rouble through sanctions and by engineering (with Saudi Arabian help) a 41% drop in oil prices by January 2015.

Plainly, last Saturday morning when Ursula von der Leyen announced that ‘selected’ Russian banks would be expelled from SWIFT and the international financial messaging system; and spelled out the near unprecedented Russian Central Bank reserve freeze, we were witnessing the repeat of 1998. The collapse of the economy (as Le Maire said), a run on the domestic banks and the prospect of soaring inflation. This combination was expected to conflate into a political crisis – albeit one intended, this time, to see Putin replaced, vice Yeltsin – aka regime change in Russia, as a senior U.S. think-tanker proposed this week.

In the end, the Rouble fell, but it did not collapse. The Russian currency rather, after an initial drop, recovered about half its early fall. Russians did queue at their ATMs on Monday, but a full run on the retail banks did not materialise. It was ‘managed’ by Moscow.

What occurred on that Saturday which prompted the EU switch from moderate sanctions to become a full participant in a financial war à outrance on Russia is not clear: It may have resulted from intense U.S. pressure, or it came from within, as Germany seized an opportune alibi to put itself back on the path of militarisation for the third time in the past several decades: To re-configure Germany as a major military power, a forceful participant in global politics.

And that – very simply – could not have been possible without tacit U.S. encouragement.

Ambassador Bhadrakumar notes that the underlying shifts made manifest by von der Leyen on Saturday “herald a profound shift in European politics. It is tempting, but ultimately futile, to contextually place this shift as a reaction to the Russian decision to launch military operations in Ukraine. The pretext only provides the alibi, whilst the shift is anchored on power play and has a dynamic of its own”. He continues,

“Without doubt, the three developments — Germany’s decision to step up its militarisation [spending an additional euro100 billion]; the EU decision to finance arms supplies to Ukraine, and Germany’s historic decision to reverse its policy not to supply weapons to conflict zones — mark a radical departure in European politics since World War II. The thinking toward a military build-up, the need for Germany to be a “forceful” participant in global politics and the jettisoning of its guilt complex and get “combat ready” — all these by far predate the current situation around Ukraine”.

The von der Leyen intervention may have been opportunism, driven by a resurgence of SPD German ambition (and perhaps by her own animus towards Russia, stemming from her family connection to the SS German capture of Kiev), yet its consequences are likely profound.

Just to be clear, on one Saturday, von der Leyen pulled the switch to turn off principal parts to Global financial functioning: blocking interbank messaging, confiscating foreign exchange reserves and the cutting the sinews of trade. Ostensibly this ‘burning’ of global structures is being done (like the burning of villages in Vietnam) to ‘save’ the liberal Order.

However, this must be taken in tandem with Germany’s and the EU decision to supply weapons (to not just any old ‘conflict zone’) but specifically to forces fighting Russian troops in Ukraine. The ‘Kick Ass’ parts to those Ukrainian forces ‘resisting’ Russia are neo-Nazi forces with a long history of committing atrocities against the Russian-speaking Ukrainian peoples. Germany will be joining with the U.S. in training these Nazi elements in Poland. The CIA has been doing such since 2015. (So, as Russia tries to de-Nazify Ukraine, Germany and the EU are encouraging European volunteers to join in a U.S.-led effort to use Nazi elements to resist Russia, just as in the way Jihadists were trained to resist Russia in Syria).

What a paradox! Effectively von der Leyen is overseeing the building of an EU ‘Berlin Wall’ – albeit with its purpose inverted now – to separate the EU from Russia. And to complete the parallel, she even announced that Russia Today and Sputnik broadcasts would be banned across the EU. Europeans can be allowed only to hear authorised EU messaging – (however, a week into the Russian invasion, cracks are appearing in this tightly-controlled western narrative – “Putin is NOT crazy and the Russian invasion is NOT failing”, warns a leading U.S. military analyst in the Daily Mail. Simply “[b]elieving Russia’s assault is going poorly may make us feel better but is at odds with the facts”, Roggio writes. “We cannot help Ukraine if we cannot be honest about its predicament”).

So Biden, finally, has his foreign policy ‘success’: Europe is walling itself off from Russia, China, and the emerging integrated Asian market. It has sanctioned itself from ‘dependency’ on Russian natural gas (without prospect of any immediate alternatives) and it has thrown itself in with the Biden project. Next up, the EU pivot to sanctioning China?

Will this last? It seems improbable. German industry has a long history for staging its own mercantile interests before wider geo-pollical ambitions – before, even, EU interests. And in Germany, the business class effectively is the political class and needs competitively-priced energy.

Whilst the rest of the world shows little or no enthusiasm to join with sanctions on Russia (China has ruled out sanctions on Russia), Europe is in hysteria. This will not fade quickly. The new ‘Iron Curtain’ erected in Brussels may last years.

But what of the unintended consequences to last Saturday’s ‘sanctions Blitzkrieg’: the ‘unknowable unknowns’ in Rumsfeld’s famous mantra? The unprecedented switch-off affecting a key part of the Globalist system did not download into a neutral, inert context – It developed into an emotionally hyper-charged atmosphere of Russophobia.

Whereas EU states had hoped to spare Russian energy shipments, they did not take account of the frenzy raised against Russia. The oil market has gone on strike, acting as if energy were already in the frame for Western sanctions: Oil tankers had already started to avoid Russian ports because of sanctions fears, and rates for oil tankers on Russian crude routes have exploded as much as nine-fold in the past few days. But now, amid growing fears of falling foul of complex restrictions in different jurisdictions, refiners and banks are balking at purchasing any Russian oil at all, traders and others involved in the market say. Market players fear too that measures that target oil exports directly could be imposed, should fighting in Ukraine intensify.

Commodity markets have been in turmoil since the Special Military Operation began. European natural gas jumped as much as 60% on Wednesday, as buyers, traders and shippers avoid Russian gas. A combination of sanctions and commercial decisions by shippers and insurers to steer clear has cut that contribution to global supplies sharply over the last week. A default cascade by western companies is perfectly possible. And Supply line disruption is inevitable.

Many will be affected by the commodity turmoil, but with Russia providing 25% of global wheat supplies, the 21% hike in wheat and 16% rise in corn prices since 1 January will represent a disaster for many states in the Middle East among others.

All this disruption to markets comes even before Moscow responds with its own countermeasures. They have been silent so far – but what if Moscow demands that future payments for energy are to be made in Yuan?

In sum, the changes set out by von der Leyen and the EU, with surging crude oil costs, could potentially tip global markets into crisis, and set off spiralling inflation. Cost inflation created by energy costs spiralling higher and food disruptions are not so easily susceptible to monetary remedies. If the daily drama of the war in Ukraine starts to fade from public view, and inflation persists, the political cost of von der Leyen’s Saturday drama is likely to be European-wide recession.

“Since well before the Russian invasion of Ukraine, Europeans have been struggling under the weight of runaway energy bills”, OilPrice.com notes. In Germany, for some, one month’s energy costs the same as they used to pay for a whole year; in the UK the government has raised the price cap for energy bills by a whopping 54%, and in Italy a recent 40% domestic energy cost hike could now nearly double.

The New York Times describes this impact on local businesses and industries as nothing short of “frightening”, as all kinds of small businesses across Europe (prior to last week’s events) have been forced to cease their operations as energy costs outweigh profits. Large industries have not been immune to sticker shock either. “Almost two-thirds of the 28,000 companies surveyed by the Association of German Chambers of Commerce and Industry this month rated energy prices as one of their biggest business risks … For those in the industrial sector, the figure was as high as 85 percent.”

One recalls that old prediction from the Middle East, that western values would turn against the West itself, and ultimately devour it.

On Ukraine, Biden’s State of the Union address was just ‘good vs. evil’

Russia is entering a new phase of confrontation with the West

Has Putin Miscalculated? | With Pepe Escobar