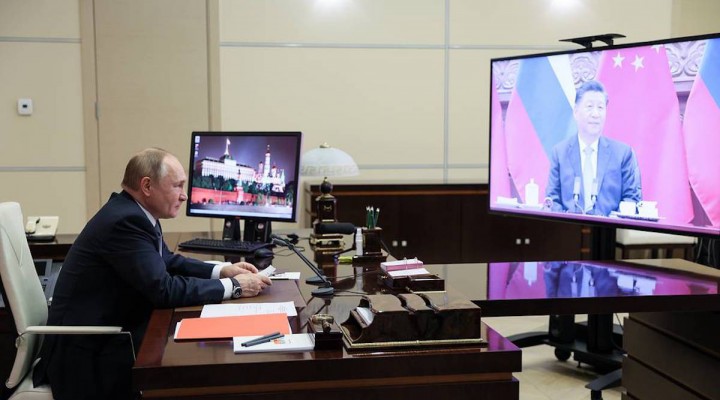 Xi Jinping and Vladimir Putin spent an hour and 14 minutes in a video conversation on Wednesday. Geopolitically, paving the way for 2022, this is the one that really matters – much more than Putin-Biden a week ago.

Kremlin press secretary Dmitry Peskov, who generally carefully measures his words, had previously hinted that this exchange would be “extremely important.”

It was obvious the two leaders would not only exchange information about the natural gas pipeline Power of Siberia 2. But Peskov was referring to prime time geopolitics: how Russia-China would be coordinating their countercoups against the hybrid war/Cold War 2.0 combo deployed by the US and its allies.

While no substantial leaks were expected from the 37th meeting between Xi and Putin since 2013 (they will meet again in person in February 2022, at the start of the Beijing Winter Olympics), Assistant to the President for Foreign Policy Yuri Ushakov did manage to succinctly deliver at least two serious bits of information.

These are the highlights of the call:

Of all of the above, the third point is the real game-changer – already in the works for a few years now, and gaining definitive momentum after Washington hawks of the Victoria “F**k the EU” Nuland kind recently floated the idea of expelling Russia from SWIFT – the vast messaging network used by banks and other financial institutions to make money transfer instructions – as the ultimate sanctions package for the non-invasion of Ukraine.

Putin and Xi once again discussed one of their key themes in bilaterals and BRICS meetings: the need to keep increasing the share of the yuan and ruble in mutual settlements – bypassing the US dollar – and opening new stock market avenues for Russian and Chinese investors.

Bypassing a SWIFT mechanism “influenced by third counties” then becomes a must. Ushakov diplomatically put it as “the need to intensify efforts to form an independent financial infrastructure to service trade operations between Russia and China.”

Russian energy businesses, from Gazprom to Rosneft, know all there is to know not only about US threats but also about the negative effects of the tsunami of US dollars flooding the global economy via the Fed’s quantitative easing.

This Russia-China drive is yet another dimension of geoeconomic, geostrategic and demographic power rapidly shifting towards Eurasia and possibly foreshadowing the advent of a new world system related to other matters Putin-Xi certainly discussed: the interconnection of Belt and Road with the Eurasia Economic Union (EAEU), the expanded reach of the  Shanghai Cooperation Organization (SCO) and the coming Chinese presidency of BRICS in 2022.

The US – with US$30 trillion in debt, 236% of its militarized GDP – is virtually bankrupt. Russia-China have already experimented with their alternative payment systems, which will inevitably integrate.

The most important banks in both countries will adopt the system – as well as banks across Eurasia doing business with them, and then vast swaths of the Global South. SWIFT, in the long run, will be used only in exceptional cases if China and Russia have their way.

Now to the heart of the geopolitical puzzle.

Ushakov confirmed that the Russian Federation has submitted proposals on security guarantees to the US. As Putin himself had confirmed even before talking to Xi, it’s all about “indivisible security”: a mechanism that has been enshrined all across the territory of the Organization for Security and Co-operation in Europe since a 1975 summit in Helsinki.

Predictably, under orders of the powers that be, NATO Secretary-General Jens Stoltenberg already rejected it.

Both Xi and Putin clearly identify how Team Biden is deploying a strategic polarization gambit under good old divide-and-rule. The wishful thinking at play is to build a pro-American bloc – with participants ranging from the UK and Australia to Israel and Saudi Arabia – to “isolate” Russia-China.

That’s what’s behind the narrative thunderously splashed non-stop all across the West – to which Biden’s Summit for Democracy was also tied. Taiwan is being manipulated against Beijing while Ukraine is being literally weaponized against Russia. “China aggression” meets “Russian aggression.”

Beijing has not fallen into the trap but has asserted at different levels that Taiwan will eventually be integrated into the mainland motherland, without any ludicrous “invasion.” And the wishful thinking that massive American pressure will lead to cracks inside the Chinese Communist Party is also likely generating zero traction.

Ukraine is a much more volatile proposition: a dysfunctional nightmare of systemic instability, widespread corruption, shady oligarchic entanglements and poverty.

Washington still follows the Zbigniew Brzezinski-concocted Maidan plan laid out for cookie distributor Nuland in 2014. Yet seven years later, no American “strategist” managed to understand why Russia would fail to invade Ukraine, which has been part of Russia for centuries.

For these “strategists”, it’s imperative that Russia faces a second Vietnam, after Afghanistan in the 1980s. Well, it’s not going to happen because Moscow has no interest whatsoever in “invading” Ukraine.

It does get more complicated. The ultimate fear dictating all US foreign policy since the early 20th century is the possibility of Germany clinching a new version of Bismarck’s 1887 Reinsurance Treaty with Russia.

Add China to the combination and these three actors are able to control just about the entire Eurasian landmass. Updating Mackinder, the US would then be turned into a geopolitically irrelevant island.

Putin-Xi may have examined not only how the imperial hybrid war tactics against them are floundering against them, as well as how the tactics are dragging Europe further into the abyss of irrelevance.

For the EU, as former British diplomat Alastair Crooke points out, the strategic balance is a disaster: “The EU has virtually ruptured its relations with both Russia and China – at the same time. Washington’s hawks wanted it. A ‘European Brzezinski’ certainly would have advised the EU differently: never lose both in tandem – you are never that powerful.”

No wonder the leadership in Moscow-Beijing can’t take anyone in Brussels seriously – be it assorted NATO chihuahuas or the spectacularly incompetent Ursula von der Leyen at the European Commission.

A faint ray of light is that Paris and Berlin, unlike the Russophobic Poland and the Baltic fringe, at least prefer having some sort of negotiation with Moscow over Ukraine as opposed to slapping on extra sanctions.

Lavrov had to meticulously explain the consequences of NATO expansion; the Minsk agreement; and how Berlin should exercise its right to pressure Kiev to respect Minsk.

No leaks about it should be expected from Ushakov. But it’s fair to imagine that with “partners” like the US, NATO and the EU, Xi and Putin should conclude that China and Russia don’t even need enemies.