HOME / Economy / Putin, Xi and the Power of Siberia 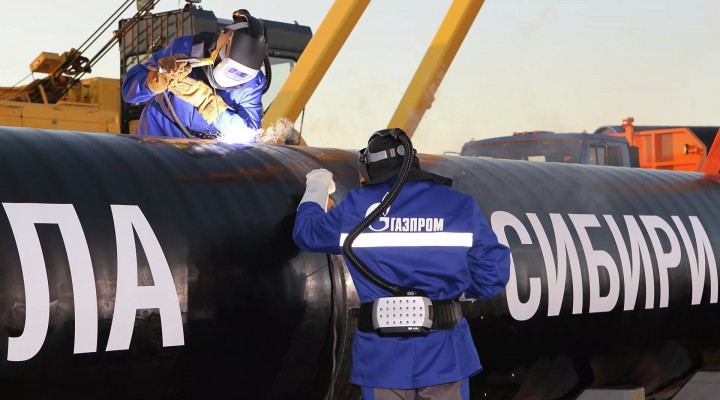 Topping the agenda in the videoconference between the Russian and Chinese leaders this week are two interrelated topics: the aggression being ramped up by the United States and its NATO allies as well as developing strategic energy trade.

Both Russia and China are coming under frenetic geopolitical attack from Washington and its European minions in recent weeks. More than the usual “normal” hostility, that is. Paradoxically, Moscow and Beijing are being accused with evermore shrill claims of threatening the “rules-based order” with aggression.

A hysterical Western media campaign has built up the narrative that Russia’s President Putin is planning to invade Ukraine even though the evidence for such irrational claims is of the usual evanescent kind that drives most Western propaganda.

Likewise, there is a similar media campaign to demonize China’s President Xi Jinping for plotting to militarily invade the restive Chinese province of Taiwan.

Fresh from his weekend trip to Europe warning about alleged Russian invasion plans, the US Secretary of State Antony Blinken is touring Southeast Asia this week promoting denunciations of China for “aggressive actions” and for allegedly threatening global commerce worth $3 trillion passing through the South China Sea every year.

Videoconferences initiated by US President Joe Biden with Xi and Putin have not served to tamp down tensions. If anything, the tensions are increasing due to unrelenting hostile rhetoric from the Biden administration continuing to air provocative accusations of aggression by Russia and China. Biden said he doesn’t want a Cold War or confrontation with Russia or China. But the persistent rhetoric shows the opposite.

With regard to Russia, it seems clearer that one objective in the geopolitical offensive (driven by dutiful Western media) is the cancellation of the Nord Stream 2 gas project between Russia and Europe. The 1,200-kilometer undersea pipeline has been completed earlier this autumn despite long-held opposition from Washington. The Americans want to sell their own more expensive and dirty shale gas to Europe.

Now the new German government seems to be toeing the US line on objecting to Nord Stream 2. Foreign Minister Annalena Baerbock, who has long been opposed to the project, is saying that the Nord Stream 2 pipeline may be scrapped because of Russia’s “aggression towards Ukraine”.

This is exactly the same line spouted by US Secretary of State Blinken who has cited Russia’s purported threat to Ukraine as a reason for Europe to bury the Nord Stream 2 partnership.

In other words, the Americans seem to have at last found an acceptable – albeit spurious – rationale for the pliable Europeans to adopt. Namely, punish Russia by canceling energy trade for its alleged transgressions towards Ukraine. No matter that the narrative is hysterical fantasy and no matter that Europe will likely be hit with a massive gas crisis from soaring prices and lost supplies from Russia.

In dealing with such Russophobic people like those in the Biden administration and the new German government the reality is that Russia can never win the argument. No reasonable argument or amount of evidence can change such prejudiced minds.

Blinken and Baerbock are saying that Russia must “deescalate” the tensions with Ukraine in order to prove that Moscow is a responsible power. But how can Russia “deescalate” a situation that has been escalated by Washington and its NATO partners with regard to tensions over Ukraine from their support to the Russophobic Kiev regime?
China, like Russia, is at a disadvantage in trying to dialogue with Washington and its European vassals. Like Moscow, Beijing is being demanded to “prove a negative”, that is, deescalate tensions over Taiwan when in fact it is the US that is winding up the tensions.

It, therefore, seems highly significant that Putin and Xi are discussing US and NATO aggression in the same forum as bilateral energy trade. The US aggression towards Russia is certainly about sabotaging Moscow’s strategic trade with Europe, which European political leaders are stupidly duped into playing along with.

A powerful response from Russia and China would be for their leaders to announce plans to expand bilateral energy trade. That strategic partnership between Moscow and Beijing has been growing steadily over the past decade and more. But there is a lot more room for expansion of Russian gas and oil supplies to China since it has become the world’s leading economy and will be for decades to come. According to global energy analysts, Russia’s vast Siberian energy resources could be gradually redirected from existing European markets. That might take time and more ambitious infrastructure for pipelines, but it is eminently doable in a strategic pivot.

Russia and China sharing land transits for energy trade would also remove the menacing threats by the United States to cut off global maritime chokepoints as a way of pressurizing Beijing.

For Washington and its European lackeys accusing Russia of weaponizing energy trade with Nord Stream 2 and Ukraine transit, a superlative blow to such propaganda would be Russia and China saying to the US and EU: OK, you ingrates, deal with your futile energy problems, we are getting on with advancing much bigger strategic business.

Why waste Siberian power on fools?

0 thoughts on “Putin, Xi and the Power of Siberia”