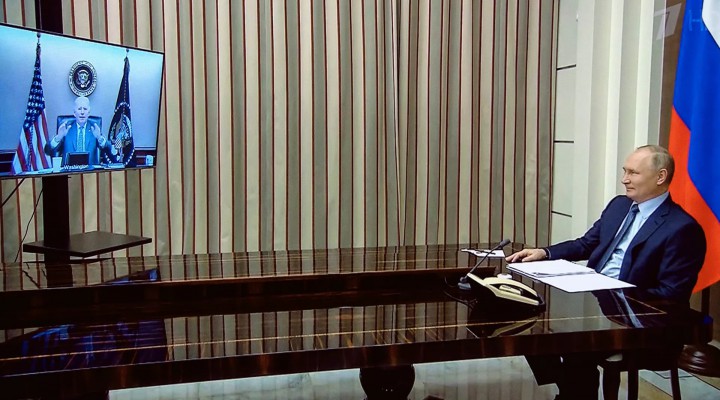 Joe Biden’s much-hyped video call with Russian President Vladimir Putin was widely reported as a “warning” from the American leader for Russia to back down.

As we enter the Christmas season that’s just pantomime on Pennsylvania Avenue.

The private video call which lasted two hours on Tuesday was eagerly anticipated around the world amid mounting tensions and fears of a military confrontation over Ukraine.

The next day headlines in Western media outlets were laden with dramatic “warnings” reportedly given by Biden to Putin, telling the Russian leader to abandon nefarious plans for a military invasion of Ukraine.

America’s NPR reported: “In a two-hour-long call with Putin, President Biden warned that the U.S. was prepared to make Moscow pay if an invasion should occur.”

The New York Times billed the big moment thus: “Biden delivers a warning to Putin over Ukraine”. While the US establishment’s favourite think-tank, the Council on Foreign Relations, briefed its readers: “Biden warns Putin of consequences if Russia invades Ukraine”.

So, just in case you didn’t get the message yet: Biden read the riot act to Putin about invading Ukraine, or so we are led to believe.

The thing is though it is only an assertion by the Biden administration that Russia is planning to launch an offensive against Ukraine. That assertion has been predictably and dubiously amplified by the Western media as well as by the NATO-backed Kiev regime. The 2014 CIA-installed Neo-fascist regime has been claiming for nearly seven years that Russia is threatening an invasion and that it is standing alone to defend the rest of Europe from being overrun by Russian tanks.

Over the past month, Moscow has repeatedly dismissed a deluge of Western media claims that Russian troops are building up near Ukraine’s border for an incursion. The U.S. and Ukrainian military intelligence can’t seem to agree on a figure for the alleged buildup. Some reports say 90,000, others say 175,000. In any case, whatever the number, the troops are on Russian soil. Where does the West want them to go? To Russia’s Far East and Vladivostok? Oh no, then Russia will be accused of plotting to invade Alaska?

Senior U.S. officials like Secretary of State Antony Blinken even admit to their own absurd vacuity, saying, “We don’t know what Putin’s intentions really are.”

The optics of the Biden-Putin video call say a lot too. Biden was seated in the Situation Room at the White House for the meeting. That conjures an atmosphere of crisis and showdown reminiscent of the 1962 Cuban missile confrontation between Kennedy and Khrushchev.

For his part, Putin took the call while at his residence in Sochi on the Black Sea where he goes for relaxation.

It was notable too that Putin was photographed seated at a table on his own to engage with the U.S. president while Biden was accompanied in the Situation Room with four aides, including Antony Blinken, who were obviously present to support or prompt the titular commander-in-chief. The TV monitors appeared to show the two presidents in a face-to-face encounter, but out of the screen view were the four aides to Biden.

The main conversation was behind closed doors, but from the initial publicly broadcasted greetings, the atmosphere was civil, cordial and relaxed. Biden was not in the slightest reproaching his Russian counterpart, as media reports claimed.

Following the discussions, U.S. national security advisor Jake Sullivan told media there was a lot of give and take between the two leaders but there was “no finger-wagging”.

Sullivan said Biden informed Putin that there would be serious economic consequences if Russia invaded Ukraine – again an invasion that Moscow has repeatedly dismissed as baseless hysteria. Sullivan indicated that the leverage could be exerted through the U.S. and European Union cancelling the Nord Stream 2 gas export pipeline from Russia.

Sullivan also suggested that Washington would cut off Russia from the U.S.-controlled international banking system known as SWIFT which would impact Russia’s export earnings. Sullivan said another leverage point would be for the U.S. to increase military aid to Ukraine, the Baltic states and other eastern European countries. But it is unlikely that the United States would become directly involved in a confrontation with Russia.

This all has a certain logical traction but it is divorced from reality. Russia is supposedly warned not to invade Ukraine. Putin is supposedly warned about severe economic consequences if he orders an invasion. Then there is no invasion, and it all looks as if Biden, the noble leader of the free world, bravely faced down the Russian “autocrat”.
But hold on a moment. That only holds if we believe in the dubious claims that Russia is planning an imminent invasion of Ukraine.

If there is no invasion that’s because there wasn’t a plan in the first place. It has nothing to do with purported warnings from Biden. It is due simply to the fact that, as Russia has maintained all along, it is not threatening anyone.

Biden’s threats of “consequences” are therefore empty and directed at a straw man of Western propaganda invention.

So what did take place? The White House readout of the conversation was brief and bereft of any detail. The Kremlin version of the conversation said that both sides agreed to discuss further Russia’s concerns about national security posed by the U.S.-led NATO military alliance building up on Russia’s borders.

Sullivan claimed that Biden laid out an “alternative path” for Putin involving diplomacy and peaceful negotiation. “I will say that formal agreements or formal treaties were not on the table in the conversation today,” the national security advisor said. He added: “But the straightforward notion that the United States flanked by our European allies and partners would be prepared to talk to Russia, about the strategic issues in the European theatre — that was on the table.”

In other words, after the American pretensions are discarded, this is the “alternative path” of diplomacy and negotiation that Russia has been consistently calling for but which the United States, NATO and their sponsored Russophobic Kiev regime have all been avoiding up to now. It wasn’t Putin that took an off-ramp. It was Biden.
Biden’s “warning” is just theatrics to conceal a crisis that Washington has created in the first place. Moscow wasn’t “told” anything. It is Washington that needs to stop playing geopolitical mind-games and get down to earnest dialogue – if, that is, it genuinely wants to avoid confrontation.