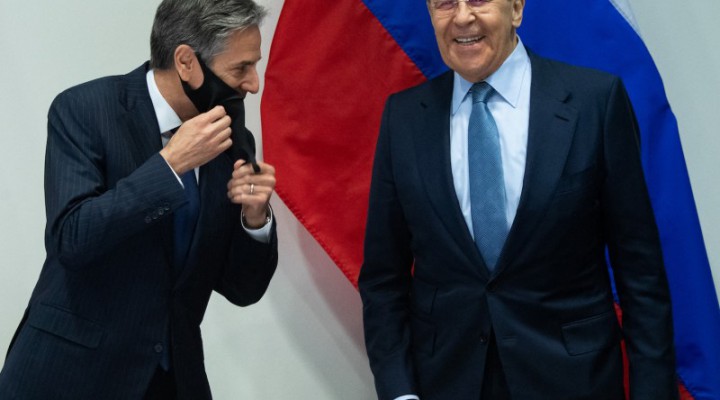 So Sergey Lavrov and Tony Blinken met for nearly two hours at the Harpa Concert Hall in Reykjavik, on the sidelines of the ministerial session of the Arctic Council.

Frosty? Not really. Even if the get together may not have been a throwback to a Reagan-Gorbachev funfest in the good old Cold War days. After all, there was a NATO warship parked right outside the windows of Harpa Hall – like a prop in a Marvel blockbuster.

Self-described “amateur guitarist” Blinken may have been relatively swayed by the charms of the 1968 Elvis stunner A Little Less Conversation.

Well, at least there was some conversation. As for “a little more action”, as Elvis sang it, it remains to be seen. A good sign is that they addressed each other as “Sergey” and “Tony”. Blinken even attempted a “Spasiba”.

Let’s start with Lavrov – who routinely dwells in the Valhalla of diplomacy, unlike average apparatchik Blinken.

We agreed to continue our joint actions, which are developing quite successfully, on regional conflicts where the interests of the United States and Russia coincide. This is the nuclear problem of the Korean Peninsula, and the situation with efforts to restore the Joint Comprehensive Plan of Action on the Iranian nuclear program. This is Afghanistan, where the expanded troika consisting of Russia, China, the United States, Pakistan is actively working. We discussed how at this stage we can make all our joint actions more effective.

So there was “a very useful conversation” (Lavrov again) on what they do coincide (revival of the JCPOA), don’t coincide (Afghanistan) and hardly coincide (North Korea).

More than useful, actually: “constructive”. Lavrov again: “There is an understanding of the need to overcome the unhealthy situation that developed between Moscow and Washington in previous years.”

Lavrov made it very clear what we are at a stage of mere “proposal” to “start a dialogue, considering all aspects, all factors affecting strategic stability: nuclear, non-nuclear, offensive, defensive. I have not seen a rejection of such a concept, but experts still have to work on it.”

So Blinken did not reject it. The devil is how the “experts” will “work on it”.

Those pesky “laws of diplomacy”

It’s quite useful to compare what they said to each other – at least according to what was leaked.

Lavrov stressed discussions must be “honest, factual and with mutual respect”. Most important area of cooperation is “strategic stability”. He crucially invoked the “laws of diplomacy” – something that the Hegemon has not exactly been fond of lately: they “call for reciprocity, especially when it comes to responding to any kind of unfriendly action.” Implied is Moscow’s willingness to solve problems “inherited from previous US administrations.”

Blinken said the US wants a predictable and stable relationship: “It’s our view that if the leaders of Russia and the United States can work together cooperatively, our people, the world can be a safer and more secure place.” Areas where interests “intersect and overlap” include battling Covid-19 and climate change, apart from Iran, Afghanistan and North Korea.

“Russian aggression” though could not simply be thrown into the Arctic Sea: “If Russia acts aggressively against us, our partners, our allies, we will respond… not for purposes of escalation, not to seek conflict, but to defend our interests.”

So “experts” will have a field day – actually, days, weeks and months – figuring out how which brands of “Russian aggression” attack “our interests.”

As it stands, it looks like the bilateral Putin-Biden summit next month in a “European diplomatic capital” – as rumors swirl in Brussels – may be a go. To hope that it would take place, for instance, in Nursultan – the diplomatic capital of Eurasia – is a long shot.

Lavrov: “We will prepare proposals for our presidents both on these issues [the work of diplomatic missions] and the matters related to our dialogue on strategic stability.”

It’s quite enlightening to consider two parallel developments to Reykjavik.

The State Dept. confirmed it will waive sanctions against the Swiss-based company overseeing the construction of Nord Stream 2. And SWIFT confirmed to the Russian Central Bank that business continues as usual, and Moscow won’t be cut off from the system.

These may be interpreted as goodwill gestures ahead of the possible June summit. Afterwards, no one knows.

It’s also enlightening to note what Lavrov and Blinken did not discuss: vaccine diplomacy.

Sergey Naryshkin, the director of the SVR foreign intel, is now on the record saying that the registration of Sputnik V vaccine at the EU is being stalled by “signals from the corridors of power” in Brussels – something I confirmed weeks ago with relatively independent diplomats. The European Medicines Agency (EMA) still sustains that the vaccine may be registered before the end of the month.

And then there are glaring cases like Brazil, the target of tremendous pressure by Washington to prevent Sputnik V’s approval. Sputnik V has been registered by 61 nations, overwhelmingly in the Global South.

Let’s assume that Cold War 2.0, in theory, may have been put on hold. Now it’s time then for a “little more action”. Will it come to the point that Sergey and Tony will agree on “a little less fight, a little more spark” and dance to the rhythm of “all this aggravation ain’t satisfactioning me”?