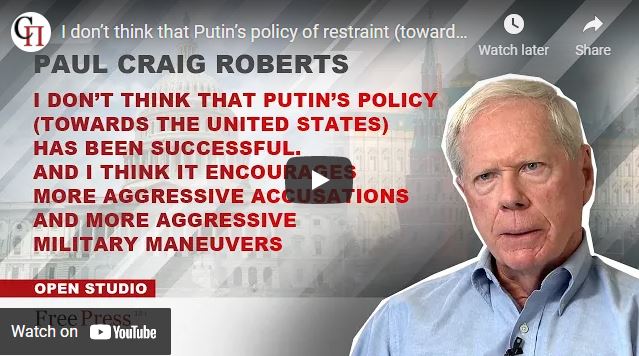 Paul Craig Roberts: “…I don’t think that Putin’s policy of restraint and non-confrontation (towards the United States) has been successful. Putin’s good intentions are not reciprocated by Washington. I think Putin’s responsible behavior encourages more aggressive accusations and more aggressive military maneuvers. At some point, the West is going to go too far, and there’s going to be no alternative to Russia than to take a more major kind of response. And that’s where the danger is.”

A prominent American economist, former United States Assistant Secretary of the Treasury for Economic policy in the Administration of President Ronald Reagan, Dr. Roberts was editor and columnist for The Wall Street Journal, columnist for Business Week, professor of business administration and professor of economics at George Mason University, inaugural William E. Simon Chair in Political Economy at Georgetown University and blogger. He spoke about his vision of Russian-American relations in the Open Studio. According to Mr. Roberts, the situation between the two major nuclear powers is much more serious today and this is the fault of the demand in Washington by the neoconservatives for American hegemony. Putin and Russia are seen as obstacles that need to be removed.

The New Cold War is far more dangerous because the people in Washington are doing everything possible to raise tensions, not lower them, which was the policy during the 20th century Cold War..

[The Russian president]… understands that the Americans and NATO have no prospect of winning a conventional war with Russia. That simply cannot happen. And so, a conflict would be nuclear…

Putin’s efforts to be low-key, diplomatic and responsible are interpreted by Washington as weakness – as there’s no foot that’s come down hard to say: “OK, That is enough!”

P.S. We should view this interview as a discussion aimed at avoiding conflict between the Russian Federation and the United States . The interview is an analysis of political mistakes on both sides that can have unintended consequences.

This is exactly what the conversation of two well-known experts – Dr. Paul Craig Roberts (USA) and Serge Duhanov (Russia) – is about.