HOME / WORLD / Detente: The Vital Word Missing From Discourse On Russia And China 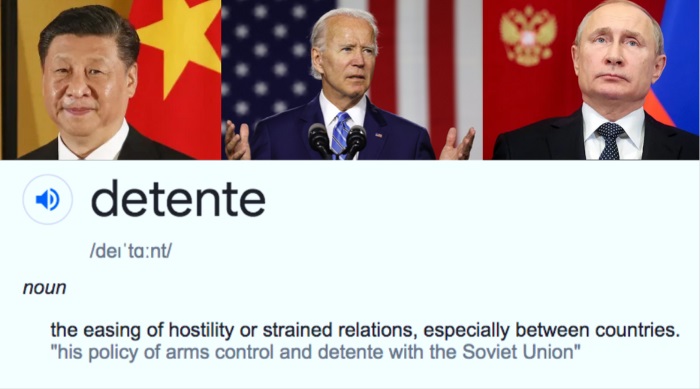 On a recent 60 Minutes interview with Norah O’Donnell which focused on the Biden administration’s China policy, US Secretary of State Tony Blinken talked about the United States as a defender of the rules-based international order and the importance of bringing Beijing into compliance with it.

“Our purpose is not to contain China, to hold it back, to keep it down:  it is to uphold this rules-based order that China is posing a challenge to,” Blinken said. “Anyone who poses a challenge to that order, we’re going to stand up and defend it.”

Now, had Blinken been speaking to an actual journalist, he would have been asked in what specific ways defending “the rules-based order” against China would differ from trying to contain China and keep it down. He would have also been asked what business a nation that has killed millions and displaced tens of millions in illegal wars just since the turn of this century while deliberately starving civilians to death with sanctions and blockades has proclaiming itself the defender of any “rules-based order”.

O’Donnell’s interview with Blinken was a perfect illustration of the fact that modern mainstream reporters are only allowed to ask confrontational foreign policy questions of US officials when demanding to know why they aren’t being more hawkish and aggressive. Here are some of the questions Blinken was asked during the interview:

“I know you say the goal is not to contain China, but have you ever seen China be so assertive or aggressive militarily?”

“Do you think we’re heading toward some sort of military confrontation with China?”

“Let’s talk about human rights.  Describe what you see is happening in Xinjiang that maybe the rest of the world doesn’t.”

“If Xinjiang isn’t a red line with China, then what is?”

“The Chinese have stolen hundreds of billions, if not trillions, of dollars of trade secrets and intellectual property from the United States.  That sounds like the actions of an enemy.”

“And so did President Biden tell President Xi to cut it out?”

“What is the administration going to do about Hong Kong?”

“Then why not boycott the 2022 Olympics in Beijing?”

In fact, as the US-centralized empire hurdles headlong into increasingly hostile cold wars with both Russia and China, the word “detente”, which means the easing of hostilities between nations, has been curiously absent from mainstream discourse. During the last cold war it was a mainstream point of discussion embraced by prominent Democrats and Republicans alike, but in this dangerous new multifront cold war it’s gone missing.

You’ll see the word appear occasionally, but almost never with regard to the two powerful nuclear-armed nations where it matters the most. A recent Guardian article talks of potential detente between Syria and Saudi Arabia, a Reuters piece three weeks ago referred to detente between the US and Iran, and a Wall Street Journal article last month spoke of detente between the US and North Korea, but recent use of that word in widely circulated western news media is hard to find or missing entirely.

And I see this play out in the online conversations and debates I engage in from day to day: people who defend the reckless cold war escalations by the United States against Moscow and/or Beijing generally speak as though they haven’t even considered the possibility that detente could occur. Many don’t even know the word exists. They simply assume that the only option on the table is increasingly confrontational cold war escalations, and don’t even have a conceptual framework in place for considering any alternative. That’s how extensively the possibility of peace with Russia and China has been hidden from their attention.

And one gets the sense that this is entirely by design. The late Stephen Cohen, renowned scholar and expert on US-Russia relations, used the word “detente” constantly until his death last year, but in the preceding years as things began heating up with Russia he’d been finding his analysis less and less welcome on mainstream channels. For the same reason Norah O’Donnell only asked Blinken how he was going to escalate aggressions against China and never how he was going to de-escalate them, the mainstream media are keeping the general public ignorant of the possibility of, and dire necessity for, detente.

We are meant to take it as a given that the only option available is to continue increasing aggressions with these two nuclear powers. This is a lie, and it is insane. Detente absolutely is an option. We do not need to keep risking all life on earth with this psychotic game of nuclear Russian roulette every day just because a few powerful sociopaths have decided the US empire must retain supremacy at all cost.

There is no valid reason why we cannot all get along and spend our energy collaborating toward human thriving. The incredible shrinking Overton window of the mainstream discourse manufacturers not even permitting this as a topic of discussion tells you they are deliberately hiding it from our awareness in the interests of the powerful. It is being hidden because the only alternative to attacking and undermining the interests of China and Russia is for the US empire to relinquish its unipolar domination of the planet and allow other nations to thrive beyond its control.

I am often accused of having sinister loyalties to the Kremlin or to the Communist Party of China–which one depends on the day and what I happen to be writing about at the time. The reality though is that I simply do not consent to having my life, the life of everyone I love, and the life of everyone I share this planet with gambled on some idiotic American supremacist value that serves nobody but the powerful. There is no good reason we can’t lay down our arms and collaborate with other nations in friendship, and anyone who says otherwise is lying.

0 thoughts on “Detente: The Vital Word Missing From Discourse On Russia And China”