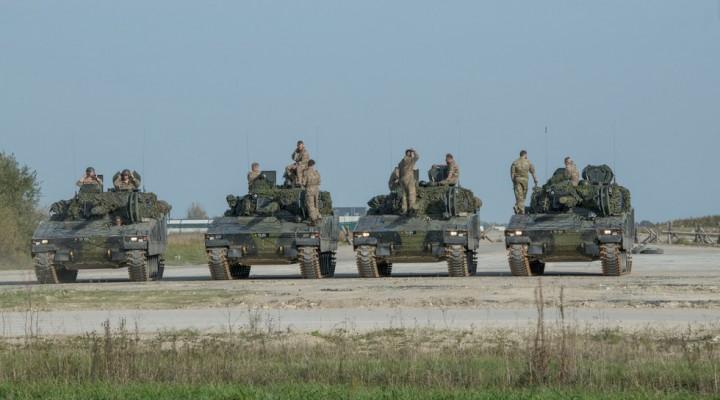 European Defender 2021, NATO’s 28,000-person exercise in military muscle flexing, is supposed to be an example of deterrence through strength. In reality, it is just another demonstration of military impotence.

The North Atlantic Treaty Organization (NATO), the 29-member transatlantic military alliance borne from the geopolitical realities of post-Second World War Europe, decided last year, in the face of what it deemed a threat from a resurgent Russia, that it needed to reinstitute the kind of large-scale military exercises centered on the notion of the rapid reinforcement of Europe it conducted during the Cold War. The result was European Defender 20, which envisioned the largest movement of US-based forces to Europe since the “Return of Forces to Germany” (REFORGER) exercises of the 1980’s.

Unfortunately for NATO, European Defender 20 fizzled in the face of the Covid 19 pandemic, with many of the troops scheduled to participate compelled to remain in their barracks, and those that did make the trip forced to curtail the scope and scale of the planned training events. As a result, a tremendous amount of attention is being paid to the second iteration of what NATO claims will become an annual exercise of the alliance’s readiness, European Defender 21. What European Defender 21 lacks in size (the total force component is planned to be 30,000 personnel drawn from 27 nations, two of whom – Georgia and Ukraine – are not NATO members, down from the 37,000 envisioned for European Defender 20) it makes up for in ambition: six major events, and scores of lesser exercises, taking place in 30 training areas located in 12 countries.

One of the stated purposes of European Defender 21 is for NATO to demonstrate its ability to maintain a “deterrent posture” in northern Europe (i.e., Poland and the Baltics) while concurrently shifting forces to other areas in Europe. The “proof of concept” phase of European Defender 21 that demonstrates this capability will involve a “Joint Logistics over-the-shore” operation involving the movement of military equipment from ships into the Albanian port of Durres, and then the transport of this equipment to training areas in Macedonia, Croatia, Bosnia and Hungary.

An exercise of this nature always sounds impressive on paper. The proof of the pudding, so to speak, will come with implementation, and here NATO will need to keep the expectations bar quite low. Albania is a new member, and the port of Durres has not been used to offload military equipment since the Second World War. The road and rail connectivity between Albania and its neighbors is untested and largely unsuited for the transport and sustainment of large military formations. The Durres operation serves as a feeder exercise into a larger operation, Steadfast Defender, which is focused on the transatlantic reinforcement of Europe, thereby demonstrating NATO’s ability to respond rapidly to any potential Russian aggression.

While one should not predict failure before it occurs, the reality is Steadfast Defender will be fighting an uphill battle just to get forces to the designated training areas and sustain the planned operations. There is virtually zero interoperability between the US forces being deployed and their NATO hosts. While REFORGER exercises maintained a high tempo of operations throughout the assigned operations period, exercises like Steadfast Defender operate on a crawl-walk-run basis, where the participants learn their respective roles, and then gradually perfect them over time. Given the neophyte nature of the NATO nations involved in Steadfast Defender, the participants will be lucky to get out of the “crawl” phase unscathed. If Steadfast Defender were an actual deployment of NATO rapid-response forces in time of crisis, the result would be the total loss of combat effectiveness before there was any engagement with the enemy – the simple act of trying to project military force into the western Balkans under duress would overwhelm NATO.

One of the purposes behind training is to identify operational shortfalls and fix them over time. In this, both European Defender 21 and Steadfast Defender are valuable training iterations. Unfortunately for NATO, the exercises are being marketed as a visible display of NATO’s conventional deterrent, a signal to Russia that any aggression can and will be met with combat forces capable of defending NATO soil and interests.

Given the fact that the emphasis on European Defender 21 is the western Balkans region of NATO, the clear intention of NATO in conducting these exercises is to flex its military muscle in the face of Russia’s ongoing military deployments opposite its border with Ukraine. Here, Russia was able to mobilize more than 100,000 combat ready troops from two field armies in a matter of days. NATO simply does not have a viable response to such a capability. Moreover, exercises such as European Defender 21, far from providing a statement of deterrence designed to intimidate Russia, are but a reminder of NATO’s impotence in the face of Russia’s own impressive military capability. The bottom line is, if push came to shove, NATO is incapable of defending NATO.

NATO Ending War in Ukraine Like Arsonist Putting Out Fire

Ukraine’s NATO fantasy is a suicide pill in disguise; military action by the alliance against pro-Russian forces would be crushed