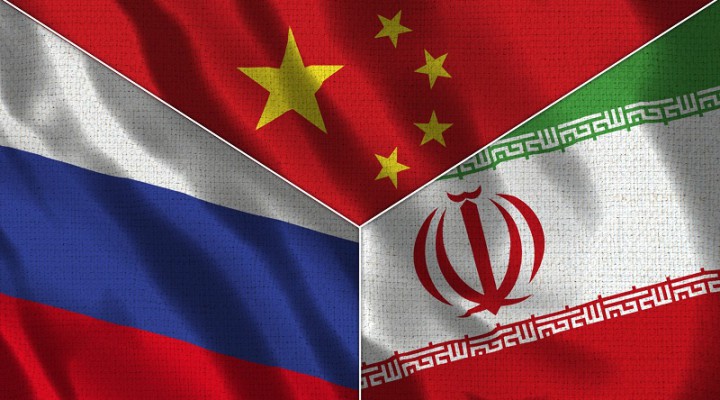 It appears as though these three are mostly in sync with one another, but that observation doesn’t mean that they constitute an ‘eastern axis’ like the Iranian Foreign Ministry spokesman claimed.

Iranian Foreign Ministry spokesman Saeed Khatibzadeh announced on Monday that his country intends to sign a strategic partnership agreement with Russia. In his words:

“The initial arrangements of this document, entitled the Global Agreement for Cooperation between Iran and Russia, have been concluded. We are in the process of finalizing diverse clauses of the document and we will send it to Moscow. In recent years, it has become necessary to improve relations between Iran and Russia and to concentrate on strategic partnerships. Between Iran, China and Russia, the eastern axis is emerging.”

This would be a mutually beneficial development if it comes to pass, but his declaration of an “eastern axis” between Iran, China, and Russia is arguably an inaccurate description.

All three countries are members of the Shanghai Cooperation Organization (SCO) and committed to facilitating the emerging Multipolar World Order. They hold very similar stances on key issues, and Russia and China have generally supported Iran on most issues except when it came to the Islamic Republic’s alleged plans to construct nuclear weapons. Even so, despite agreeing to UNSC sanctions against the country in the past, these two Great Powers are against the US’ unilateral ones and hope that America will successfully renegotiate the Joint Comprehensive Plan Of Action (JCPOA) with Iran in the coming future.

On the surface, it therefore appears as though these three are mostly in sync with one another, but that observation doesn’t mean that they constitute an “eastern axis”. Such terminology provocatively evokes the Old Cold War-era bloc mentality that Russia and China are both officially against. None of these countries have mutual defense obligations to the other and they sometimes disagree on sensitive issues. For instance, China and Iran were against India’s abrogation of Article 370 in August 2019 while Russia solidly stood by its special and privileged strategic partner’s side the entire time.

Another point of contention between them is the Taliban. Iran is skeptical of the group and its motives while Russia and China are comparatively much more open to it. In addition, while Russia and Iran are anti-terrorist allies in Syria, they differ over their preferred post-conflict vision for the Arab Republic. Moscow appears to favor a political compromise between Damascus and the internationally legitimized members of the armed opposition that participate in the Astana peace process while Tehran fully supports its ally’s reluctance to advance that scenario.

The other contentious issue that deserves attention is Russia’s “military diplomacy” of arming rival sides with the intent of maintaining the balance of power between them and thus hopefully encouraging a political solution to their disputes. This contrasts with the US’ version of “military diplomacy” which aims to disrupt the balance of power in favor of its regional ally in order to encourage them to more aggressively provoke their opponent. Russia continues to arm China’s Indian and Vietnamese rivals. It also has a deeply established arms relationship with Iran’s Azerbaijani rival and incipient ones with its Emirati, Saudi, and Turkish rivals.

These “politically inconvenient” facts throw cold water on the claim that an “eastern axis” is emerging between those three countries, but they also shouldn’t be interpreted as meaning that meaningful multilateral cooperation between them is impossible. To the contrary, all of this just signals that there are very real limits to how far they can go, but there’s still plenty of potential for them to tap into. All three have shared interests in advancing the common cause of Eurasian connectivity, to which end Iran can play a central role due to its geostrategic location.

Although the recent tensions with Azerbaijan have raised questions about the future of the North-South Transport Corridor (NSTC) between that country, Iran, India, and Russia, the general vector of this route can still be achieved through trans-Caspian shipping if there’s the political will and it’s determined to be economically competitive. When it comes to China’s Belt & Road Initiative (BRI), Iran is predicted to become a production powerhouse sometime in the future due to Beijing’s reportedly promised $400 billion worth of investments across the next 25 years. The two can also connect via Afghanistan-Tajikistan, Central Asia, and/or Pakistan.

In addition, Iran can leverage its prospective strategic partnership with Russia in order to receive more arms from Moscow as part of the Kremlin’s “military diplomacy”. This can help improve its regional position vis-a-vis its rivals while retaining the balance of power between them. Russia is also world-renowned for its expertise in the resource extraction and railroad industries so its associated companies can engage in a “friendly competition” with their Chinese counterparts in order for Iran to receive the best deals possible from its mutually complementary strategic partners.

Back to the topic of Iran’s contentious description of its relationship with those two as an “eastern axis”, it serves the Islamic Republic’s perception management interests to portray those ties as such. Tehran wants to signal to its rivals, especially the US-”Israeli”-GCC axis, that it isn’t “isolated” but has plenty of important support from influential Great Powers. Of course, none of those three will probably take its claims at face value since they know better than to consider those three allies in the traditional sense, but they’ll nevertheless likely take notice of Iran’s confidence in this respect.

Their populations, however, might be more influenced by this dramatic though misleading claim. What’s so curious about it is that Iran and its opponents both have an interest in presenting the Islamic Republic’s relations with Russia and China in such a way. The first-mentioned intends for it to be portrayed as a defensive alliance in advance of shared multipolar goals while some of the latter’s perception managers have a self-interest in misportraying it as an offensive and destabilizing alliance that threatens regional peace. It’s because of how this term can be manipulated by Iran’s opponents that Russia and China feel uncomfortable with it.

Although those two Great Powers have their own problems with the US, they hope to keep them as manageable as possible. They also don’t have anything against “Israel” or the GCC. To the contrary, they’re comprehensively expanding their relations with both as part of their pragmatic grand strategies. That fact might be “politically inconvenient” for some in Iran as well as its foreign supporters, hence one of the partial motivations for misportraying that country’s ties with those two in order to distract from their close relations with its rivals.

All in all, it’s arguably inaccurate to describe relations between Russia, China, and Iran as constituting an “eastern axis”. These three countries enjoy close relations and jointly work towards the goal of advancing multipolarity, but some of the differences between them limit their multilateral cooperation. Nevertheless, there are some who have an interest in presenting their relations as such, though they should be aware of the narrative blowback this could create and the pressure that it could put upon Russia and China to publicly clarify their relations with Iran in a way that could uncomfortably contradict that country’s representatives.

0 thoughts on “Is A So-Called Eastern Axis Really Emerging Between Russia, China, And Iran?”