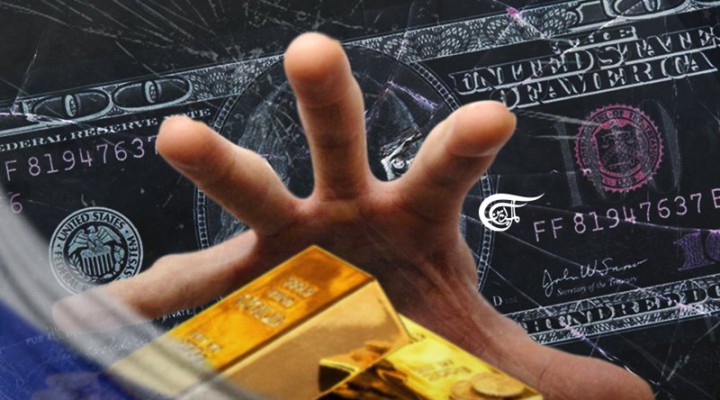 The present military operation in Ukraine, in due time, will be relegated to little more than a footnote in global history, yet the total financial war which has repercussed onto Russia will be key in defining the upcoming new world order.

The reality is that the present military operation in Ukraine, in due time, will be relegated to little more than a footnote in global history, yet the total financial war which has repercussed onto Russia will be key in defining the upcoming new world order. In fact, we may have already witnessed the moment economic history changed tracks: On 26 February, the collective West seized all the foreign exchange reserves of the Central Bank of Russia that were held in the West.

In gist, the West decreed that the Russian sovereign reserve holdings in Euros, dollars and US Treasuries were no longer ‘money good’. They were valueless as ‘money’ with which to pay Russian debts to foreign creditors. And by sanctioning too, the Russian Central Bank, it became impossible for those buying goods, energy, or commodities to transact what they owe through the Bank.

The magnitude of this event is underlined by the fact that during an earlier conflict centred on Ukraine – the Crimean War of 1854–1856 – Britain and France were at war with Russia. Yet throughout the war, the Russian government continued paying interest to British holders of its debt, and the British government also kept paying its debts to the Russian government.

The message now is plain enough – if even a prominent G20 state can have its reserves cancelled at a flick of the switch, then, for those who still hold ‘reserves’ in New York, take them elsewhere whilst the going is good! And if you need to keep something of value in reserve against a rainy day, buy and hold gold.

So we thought that US sovereign bonds (Treasuries) were ‘money’ and inviolate? Well, the US just declared those Russian Central Bank-held, US debts effectively to be null and void.  Maybe – like Russia’s Imperial Bonds that decorated European bathrooms as colourful, but worthless wallpaper – the Russian central bank will now use its US Treasury bond holdings as bathroom wallpaper (albeit in a less than colourful decoration).

Well, pay attention! There is more. In proposed legislation in the US Senate, the gold reserves held by the Central Bank of Russia will be frozen and seized.  There is a big problem to this legislation, however. The gold exists. It is in physical gold bars (about 2,300 metric tonnes of it), worth about $150 billion, BUT they are stored in Russia.  They can’t actually be frozen or seized at all.

So what is this all about if the gold cannot actually be seized?  It is all about secondary boycott sanctions on any party that assists Russia in transporting or transacting in gold. So if Russia were to import, say by way of example, Chinese semiconductor chips and to settle the transaction in gold, then, theoretically the US could sanction the receiving entity in China.

The US sanctioning recipients of Russian gold admittedly may be a tad far-fetched, but consider this: There is (at least theoretically, for no one knows for sure) 6,000 tonnes of foreign-owned gold (i.e. owned by foreign states) still held at the New York Federal Reserve.

Now that 6,000 tonnes (on the Russia precedent) can easily be seized by the US authorities – at the flick of a switch.  Why not: it’s there for the taking.  So why would foreign states want to go on keeping their gold in New York? Why not repatriate whilst you can? (Well … for one, it will be no easy feat to prise that gold away from the Fed).

Yes, some might say that Russia is held by the US to be a ‘bad actor’, whereas we are not.  Ok, that’s fine for today, but the list of states that at one time or another have been labelled ‘bad actor’ is long. Recall that even G7 member France stood accused as a ‘bad actor’ during the 2006 Iraq war.

For sure, then, we are about to see a big withdrawal of Reserves — out from US jurisdiction. Biden’s decision to seize Russian Central Bank assets is as significant in geo-political terms as was Nixon’s closing of the US ‘gold window’ in 1971. Recall that the closing of the ‘window’ initially was hailed ‘a temporary measure’.

The geo-political consequence, however, has been nuclear. The petro-dollar based trading system that flowed from it, has allowed America to ‘nuke’ the world with sanctions and secondary sanctions (through claiming jurisdiction over any, and all, trade denominated in dollars, or which in any way passed through a dollar clearing process).

US hegemony over the so-called ‘rules-based order’ has been financial (and not so much military). That is to say, one imposed by threatening any miscreants with a US Treasury, sanction ‘neutron bomb’.

And on 26 February, that system began its’ decease, when the Russo-phobic Washington ‘hawks’ stupidly picked a fight with the one country, Russia, that has the commodities needed to run the world, and to trigger the shift to a different monetary system — one that is anchored in something other than fiat money.

Clearly, the Yuan or Rouble can reflect the underlying value of their large gold reserves. But also, commodities are collateral, and collateral is money.  And Russia has the lion’s share of key commodities.

In short, the western monetary system based on the US dollar as a reserve currency is about to end in an inflationary supernova, as the US loses the ability to use Chinese savings to finance its budget and trade deficits. And, this is happening as the Boomer generation retires and their entitlement handouts soar. Defence, interest and non-discretionary entitlements already eat 100% of tax revenues. So now, there is no choice: the Fed will print most of the huge additional spending.

Zoltan Poszar, one of Wall Street’s most respected voices, argued that this present monetary system worked so long as commodity prices oscillated predictably within a narrow band – i.e. are not under extreme stress (precisely because commodities are collateral for other debt instruments).  However, when the entire commodity complex is under stress like it is now – the berserk commodity prices drive a wider ‘no-confidence’ vote in the system. And that’s what we are witnessing now.

Did the Russia hawks not foresee these ‘unexpected consequences’? Was there some grand strategy behind the seizing of the Russian reserves, beyond visceral malice directed at Russia?

No, there was just impulse. We know that because both the Fed and the ECB said that they were not consulted on the seizure, or the expulsion of seven Russian banks from the SWIFT financial clearing system, adding that they would have opposed both moves, were they to have been asked.
It was self-harm.

And what irony! In their zeal to crush the Russian economy, the US hawks inadvertently have opened the way for Russia and China to begin creating a new monetary system, well removed from the US dollar sphere.