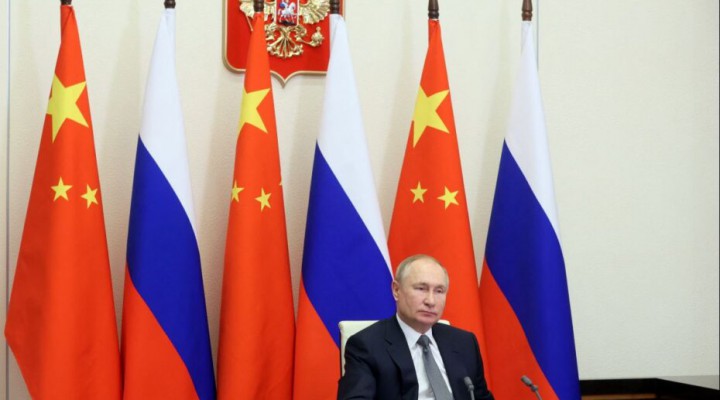 Military superpower Russia, having had enough of U.S./NATO bullying, is now dictating the terms of a new arrangement.

Coming straight from President Putin, it did sound like a bolt from the sky:

“We need long-term legally binding guarantees even if we know they cannot be trusted, as the U.S. frequently withdraws from treaties that become uninteresting to them. But it’s something, not just verbal assurances.”

And that’s how Russia-U.S. relations come to the definitive crunch – after an interminable series of polite red alerts coming from Moscow.

Putin once again had to specify that Russia is looking for “indivisible, equitable security” – a principle established since Helsinki in 1975 – even though he no longer sees the U.S. as a dependable “partner”, that diplomatically nicety so debased by the Empire since the end of the USSR.

The “frequently withdrawing from treaties” passage can easily be referred to as Washington in 2002 under Bush Jr. pulling out of the ABM treaty signed between the U.S. and the USSR in 1972. Or it could be referred to as the U.S. under Trump destroying the JCPOA signed with Iran and guaranteed by the UN. Precedents abound.

Putin was once again exercising the Taoist patience so characteristic of Foreign Minister Sergey Lavrov: explaining the obvious not only to a Russian but also a global audience. The Global South may easily understand this reference; “When international law and the UN Charter interfere, they [the U.S.] declare it all obsolete and unnecessary.”

Earlier, Deputy Foreign Minister Alexander Grushko had been uncommonly assertive – leaving nothing for the imagination:

“We just make it clear that we are ready to talk about switching over from a military or a military-technical scenario to a political process that will strengthen the security of all countries in the area of the OCSE, Euro-Atlantic and Eurasia. If that doesn’t work out, we signaled to them [NATO] that we will also move over to creating counter threats, but it will then be too late to ask us why we made these decisions and why we deployed these systems.”

So in the end it comes down to Europeans facing “the prospect of turning the continent into a field of military confrontation.” That will be the inevitable consequence of a NATO “decision” actually decided in Washington.

Incidentally: any possible, future “counter threats” will be coordinated between Russia and China.

Mr. Zircon is on the line, Sir

Every sentient being from Atlanticist shores to Eurasian steppes by now knows the content of the Russian draft agreements on security guarantees presented to the Americans, as detailed by Deputy Foreign Minister Sergey Ryabkov.

Key provisions include no further NATO expansion; no Ukraine admission; no NATO shenanigans in Ukraine, Eastern Europe, Transcaucasia and Central Asia; Russia and NATO agreeing not to deploy intermediate and short-range missiles in areas from where they can hit each other’s territory; establishment of hotlines; and the NATO-Russia Council actively involved in resolving disputes.

Russia’s Ministry of Foreign Affairs extensively reiterated that the Americans received “detailed explanations of the logic of the Russian approach”, so the ball is in Washington’s court.

Well, National Security advisor Jake Sullivan at first seemed to kick it, when he admitted, on the record, that Putin may not want to “invade” Ukraine.

Then there were rumblings that the Americans would get back to Moscow this week with their own “concrete security proposals”, after de facto writing the script for their NATO minions, invariably conveyed in spectacularly mediocre fashion by secretary-general Jens Stoltenberg.

The Ukraine narrative didn’t change an inch: “severe measures” – of an economic and financial nature – remain in the pipeline if Russia engages in “further aggression” in Ukraine.

Moscow was not fooled. Ryabkow had to specify, once again, that the Russian proposals were on a bilateral basis. Translation: we talk only to those with deciding power, not to minions. The involvement of other countries, Ryabkov said, “will deprive them of their meaning.”

From the start, NATO’s response had been predictably obvious: Russia is conducting a “substantial, unprovoked, and unjustified” military buildup along its border with Ukraine and is making “false … claims of Ukrainian and NATO provocations”.

That once again proved the point it’s a monumental waste of time to discuss with yapping chihuahuas of the Stoltenberg variety, for whom “NATO expansion will continue, whether Russia likes it or not.”

In fact, whether U.S. and NATO functionaries like it or not, what’s really happening in the realpolitk realm is Russia dictating new terms from a position of power. In a nutshell: you may learn the new game in town in a peaceful manner, civilized dialogue included, or you will learn the hard way via a dialogue with Mr. Iskandr, Mr. Kalibr, Mr. Khinzal and Mr. Zircon.

The inestimable Andrei Martyanov has extensively analysed for years now all the details of Russia’s overwhelming military dominance, hypersonic and otherwise, across the European space – as well as the dire consequences if the U.S. and NATO minions “decide that they want to continue to play dumb.”

Martyanov has also noted that Russia “understands the split with the West and is ready to take any consequences, including, already declining, shrinkage of trade and reduction of the supply of hydrocarbons to the EU.”

That’s where the whole ballet around the security guarantees intersects with the crucial Pipelineistan angle. To sum it all up: exit Nord Stream 2, enter Power of Siberia 2.

So let’s revisit why the looming energy catastrophe in the EU is not forcing anyone in Russia to lose his/her sleep.

Dancing in the Siberian night

One the top takeaways of the strategic Putin-Xi video conference last week was the immediate future of Power of Siberia 2 – which will snake in across Mongolia to deliver up to 50 billion cubic meters of natural gas annually to China.

So it was hardly an accident that Putin received Mongolian President Ukhnaagiin Khurelsukh in the Kremlin, the day after he talked to Xi, to discuss Power of Siberia 2. The key parameters of the pipeline have already been set, a feasibility study will be completed in early 2022, and the deal – minus last-minute pricing tune-ups – is practically clinched.

Power of Siberia 2 follows the 2,200 km long Power of Siberia 1, launched in 2019 from Eastern Siberia to northern China and the focus of a $400 billion deal struck between Gazprom and China’s CNPC. Power of Siberia 1’s full capacity will be reached in 2025, when it will be supplying 38 billion cubic meters of gas annually.

Power of Siberia 2, a much bigger operation, was planned years ago, but it was hard to find consensus on the final route. Gazprom wanted Western Siberia to Xinjiang across the Altai mountains. The Chinese wanted transit via Mongolia straight into central China. The Chinese eventually prevailed. The final route across Mongolia was decided only two months ago. Construction should begin in 2024.

The gas for Power of Siberia 2 will come from the same fields currently supplying the EU market. Whatever demented concoctions the European Commission – and the new German government – may apply on stalling the operation of Nord Stream 2, Gazprom’s main focus will be China.

It doesn’t matter for Gazprom that China as a customer in the near future will not fully replace the whole EU market. What matters is the steady business flow and the absence of infantile politicking. For China what matters is an extra, guaranteed overland supply rote boosting its strategy of “escaping from Malacca”: the possibility, in case Cold War 2.0 turns hot, that the U.S. Navy would eventually block maritime shipping of energy sources via Southeast Asia to China.

Beijing of course is all over the place when it comes to buying Russian natural gas. The Chinese have a 30% stake in Novatek’s $27 billion Yamal project and a 20% stake in the $21 billion Arctic project.

So welcome to 2022 and the new, high stakes realpolitik Great Game.

U.S. elites had been terrified of playing Russia against China because they fear this would lead Germany to ally with Russia and China – leaving the Empire of Chaos out in the cold.

And that leads to the “mystery” inside the enigma of the whole Ukrainian face: use it to force the EU away from Russian natural resources.

Russia is turning the whole show upside down. As an energy superpower, instead of an internally corroded EU dictated by NATO, Russia will be mostly focused on its Asian customers.

In parallel, military superpower Russia, having had enough of U.S./NATO bullying, is now dictating the terms of a new arrangement. Lavrov confirmed the first round of Russia-U.S. talks on security guarantees will be held in early 2022.

Are these ultimatums? Not really. Seems like Ryabkov, with notable didacticism, will have to keep explaining it over and over again: “We do not speak in the language of ultimatums with anyone. We have a responsible attitude towards our own security and the security of others. The point is not that we have issued an ultimatum, not at all, but that the seriousness of our warning must not be underestimated.”

One thought on “Exit Nord Stream 2, Enter Power of Siberia 2”