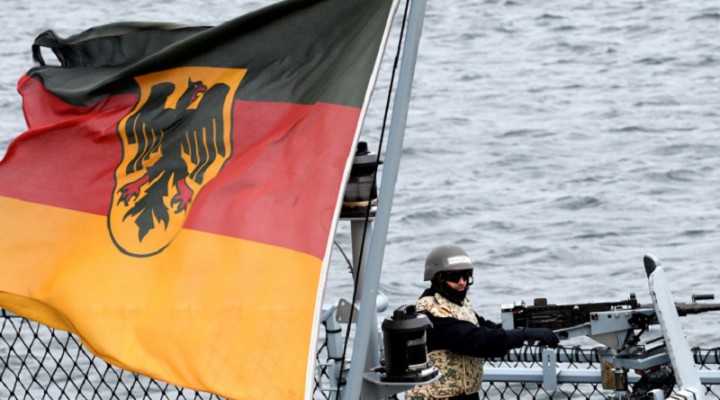 Sending a warship to the South China Sea to violate China’s maritime territory is nothing more than a favor to the US after its ally recently waived most of its sanctions against the Nord Stream II pipeline with Russia.

The German frigate Bayern recently departed from Wilhemshaven for a seven-month voyage to the Asia-Pacific. The warship will visit ports in Australia, Japan, the Republic of Korea, and Vietnam. Problematically, however, its planned route to Northeast Asia will see the frigate provocatively trespassing through Beijing’s portion of the South China Sea around December on the basis that Berlin doesn’t recognize its claims there. This will be the first such trip of any German warship to the region since 2002. It also occurs against the backdrop of American-provoked tensions between the de facto German-led EU and China.

In theory, Chinese-EU ties should be excellent since the two have complementary economies which enable mutually beneficial outcomes between them. That was the basis behind agreeing to last December’s Comprehensive Agreement on Investment (CAI). In reality, however, the US has recently pressured its NATO allies in the bloc to politicize their relations with China on false pretexts such as condemning a non-existent “genocide” in Xinjiang and pushing back against Beijing’s legal claims in the South China Sea. The artificial and completely unnecessary politicization of their economic ties risks worsening their relations.

It wasn’t a coincidence that everything became more tense after CAI was finally agreed to following years of negotiations. The US swiftly moved to impose its unipolar hegemonic vision upon the bloc. This saw US President Joe Biden traveling to Europe over the summer and leading several summits such as the NATO one which resulted in its members issuing joint statements that criticized China. It became increasingly clear that many EU members’ claims of sovereignty are illusory since the vast majority of them buckled under their American ally’s pressure to escalate what some have described as the West’s New Cold War against China.

German’s decision to dispatch its warship to the South China Sea should be seen in this strategic context. The Central European state is the EU’s de facto leader and thus among China’s top partners in the bloc, which correspondingly makes it one of China’s top partners anywhere in the world. The state of their relations at any given time can be therefore be interpreted as a bellwether of Chinese-EU relations. As it presently stands in light of Germany’s provocative geo-military plans to repeat its American ally’s illegal transit through China’s maritime territory, Chinese-EU ties can objectively be described as complicated, to put it mildly.

What’s so regrettable about all of this is that it’s unnecessary. Post-World War II Germany isn’t supposed to be a military power anymore, but an economic one. In fact, the entire world is increasingly embracing the trend of geo-economics, which is replacing geopolitics as the basis upon which to formulate policy. Germany is surprisingly moving in the opposite direction due to American pressure, but Berlin must also take responsibility for ultimately submitting to Washington’s wishes. It could have always refused regardless of the consequences that might have followed, but it calculated that it’s better to go along with its ally than to take a stand against it.

That was the wrong decision to make. By dispatching its warship to the South China Sea for the purpose of provoking China, Germany is playing into America’s hands. It’s signaling that it stands against the geo-economic trend of history and is returning to an ominous embrace of geo-military motives instead. So-called “gunboat diplomacy” never succeeded in bringing peace anywhere in the world. All that it ever did was destabilize whichever region it was practiced in. Replicating this failed policy in the South China Sea is a recipe for disaster, but not in the way that some people might expect.

There’s close to zero chance of any Chinese-German clash in the South China Sea so observers shouldn’t be too worried about that worst-cast scenario materializing. Instead, it’s much more likely that Germany will ruin its regional reputation as a geo-economic power after showing the Asia-Pacific states that it’s dangerously flirting with geo-military motives once again in order to please its American ally. This could result in less countries regarding it as a reliable partner if it’s simply perceived as a US proxy state after signaling that it lacks the sovereign will to stand against the counterproductive demands made of it by Washington.

Sending a warship to the South China Sea to violate China’s maritime territory is nothing more than a favor to the US after its ally recently waived most of its sanctions against the Nord Stream II pipeline with Russia. It doesn’t serve Germany’s geo-economic interests but arguably goes against them by worsening relations with China, one of its top partners. It also influences the Asia-Pacific states to regard the Central European country as an unreliable American proxy that might one day turn against them too if the US demands that it do so or offers it a quid pro quo in Europe like it presumably did after recently waiving most Nord Stream II sanctions.

The emerging outcome is that Germany is undermining its geo-economic edge in Asia, which is built upon a combination of its objective economic competitiveness but also its reputation as a sovereign country capable of making its own independent decisions, by capitulating to the US’ geo-military demands against China there. Instead of peacefully expanding its influence across the world through mutually beneficial economic means, Germany is voluntarily limiting it to Europe by unwittingly presenting itself as an unreliable economic partner in Asia through its unexpected geo-military provocation against China that it’s carrying out to please a third party.