HOME / WORLD / Poking the Bear, US Warns Russia All Options on Table 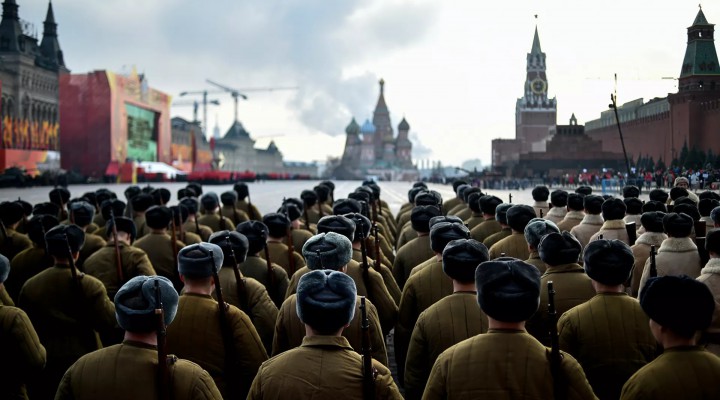 The Biden administration has threatened Russia with signature rhetoric for belligerence, declaring that the US has the right to use “all options on the table”.

This is the menacing formula of words that Washington usually deploys to mean it is weighing military attack on targeted nations like Iran, North Korea and Venezuela.

But to apply such rhetoric to Russia, a nuclear power, is reckless war hysteria. It is taking aggression to an insane threshold.

“As you can appreciate, all options are on the table, and there’s a toolkit that includes a whole range of options,” Donfried told various media on Friday, as reported by US government-owned outlet Voice of America.

This comes days after the US top military commander General Mark Milley had private telephone discussions with his Russian counterpart, General Valery Gerasimov, on the increasing tensions over the Ukraine conflict and Black Sea region. A view shows Russian warships on sunset ahead of the Navy Day parade in the Black Sea port of Sevastopol, Crimea July 27, 2019.
© REUTERS / ALEXEY PAVLISHAK

It suggests that the State Department – which is institutionally close to the White House and the CIA in setting policy – is taking the lead in raising the stakes with Russia. It seems the Pentagon is being dragged along.

The “all options” warning coincided with more alarmist rhetoric from the US-backed Kiev regime. Its Foreign Minister Dmitry Kuleba declared that Ukraine was ready to “hold the front line” for Europe against the Russian invasion. Kiev has repeatedly urged the United States and Europe to prepare for war with Russia.

The hyperbole and hysteria are spinning out of control. Russia has vehemently dismissed US and Ukrainian claims that it is planning to invade its western neighbour. Moscow supports self-defence forces in southeast Ukraine who are in a civil war with Kiev regime forces since 2014 when Washington backed a coup d’état against an elected government, bringing to power a Neo-Nazi cabal. The Kiev regime has been heavily supported by US and NATO weapons. Washington has supplied $2.5 billion worth of arms since 2014 and $400 million worth since Biden became president. The latest consignment includes Javelin anti-tank missiles. NATO member Turkey has also supplied aerial attack drones.

Russia has little to gain from an invasion of Ukraine. The resulting rift with Europe would almost certainly include the cancellation of the Nord Stream 2 gas project for exporting Siberian natural gas to Germany in which Russia has invested billions of dollars to develop over several years. Would Moscow really jeopardise that for a tenuous gamble to invade Ukraine? What of the so-called evidence that Russia is conducting a military buildup on Ukraine’s border? This claim has been echoed repeatedly by US and Western media. But what is the provenance of the data?

The claims rely on satellite images released by a private US-based company Maxar Technologies. Suspiciously, Western media have widely published the same images in a concerted fashion. But they are far from convincing. The satellite photos purport to show Russian battalions allegedly near the border with Ukraine, but what they show are Russian forces at two locations, at Yelnya and Voronezh, which are hundreds of kilometres from Ukrainian territory.

Mason Clark, a Russia expert at the US-based Institute of the Study, said the satellite imagery does not show anything unusual or portending a mobilisation for invasion, according to VOA reporting.

Yet Secretary of State Antony Blinken and his aides have repeatedly claimed the opposite: that there is a “large and unusual” buildup of Russian military forces “near Ukraine”. Blinken’s claims do not match the data.

Moscow is more in tune with reality. The actual military escalation in the region is by the Kiev regime supplied with US weapons, as well as NATO forces increasing their patrols of warships and warplanes in the Black Sea near Russia’s borders. Russian Defence Minister Sergei Shoigu stated last week that US nuclear-capable bombers had practised 10 attack sorties against Russia during this past month alone. That is an unprecedented threat to Russian national security. What is going on here seems to be a repeat of the WMD hype by the US and Britain to justify their criminal war against Iraq in 2003. In that infamous scenario, “intelligence” (in other words, propaganda and lies) was contrived to bolster policy. The policy was to attack Iraq, a crime of aggression.

The policy of the Russophobic and unhinged Kiev regime is to drag the US and NATO into a war with Russia. What is the policy of the United States? All the indications are not good. The Biden administration is going out of its way to provoke the Russian bear. Using lies, hysteria and belligerent talk about “all options on the table” is not a way to de-escalate dangerous tensions.

President Biden is reportedly going to have a phone conversation with Russian President Vladimir Putin next week. The stakes are dangerously high because of Washington’s reckless gambling on Russia’s patience.

0 thoughts on “Poking the Bear, US Warns Russia All Options on Table”