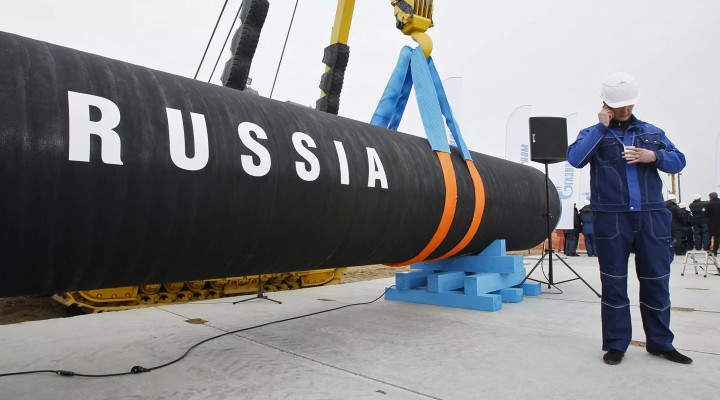 The price of March futures for gas in Europe has jumped to over $1,636 per 1,000 cubic metres, up 60% from Wednesday’s indices after Germany froze certification for the Nord Stream 2 gas pipeline. Ex-Russian President Dmitry Medvedev did not rule out on Tuesday that EU gas prices may hit the threshold of 2,000 euros per 1000 cubic metres.

The European gas price is continuing its rally: according to Bloomberg’s Tuesday report, it had already jumped by as much as 13% on “geopolitical tensions” over the Ukraine crisis. Still, it’s only the beginning, given that the EU appears ready to slap even more sanctions on Russia, according to Dr Paul Craig Roberts, former US assistant treasury secretary in the Ronald Reagan administration.

Sputnik: How will the unfolding events affect the already soaring gas prices in Europe?

Paul Craig Roberts: The sharp rise in natural gas price in Europe is entirely due to Western hysteria and stupidity. According to the EU’s own data, Europe is dependent on Russia for 46% of its natural gas. In the face of such extraordinary dependency on Russian energy, the moronic European “leaders” are falling all over themselves imposing impotent sanctions on Russia. The idiotic German chancellor actually punished the German people for Russia’s recognition of the Donbass republics by “cancelling” the Nord Stream 2 pipeline.

This foolish act was a prime reason for the hysteria that has caused a sharp rise in prices. The price rise helps Russia — if it continues to supply Europe with energy. It hurts Europe and whoever financed the Nord Stream 2 pipeline. If the pipeline sits not operating, it cannot produce a revenue stream to service the capital invested in the pipeline. I do not know who financed the pipeline. If it was Germany, then the chancellor’s sanctions on Russia have twice injured the Germans.

Sputnik: Russia is the main source of energy for Europe and alternative supply routes do not seem as feasible. Will Europe willingly back itself into a corner by refusing to buy Russian gas? What will be the consequences for European energy security?

Paul Craig Roberts: The EU’s 46% dependency on Russian natural gas is independent of the Nord Stream 2 pipeline, the opening of which has been on hold due to Washington’s pressure on Germany. Therefore, the rise in gas price is not due to a reduction of supply, but due to speculation that Russia will reduce or cut off supply. Europe is served by other pipelines. What if Russia responds to the EU’s “sanctions” by closing the pipelines that deliver 46% of Europe’s natural gas? What would Europe’s fate be?

Russia has accepted sanctions without replying in kind. Perhaps it is time for Russia to impose sanctions to teach the West a lesson.

In my opinion, there is no reason for Russia to deplete its own energy resources by sharing them with its European enemies. Perhaps the Russian government’s idea was that energy sales would be a source of foreign exchange earnings and that providing Europe with energy was in the interest of good relations with the West.

Now that the West has demonstrated that the West has no interest in good relations with Russia, there is no point in the Russian energy sales. Russia has no need for foreign exchange. The Russian central bank can finance Russian economic development with no need of foreign involvement. Russia’s holdings of instruments denominated in dollars or euros would just be confiscated by sanctions.

Sputnik: Is the Nord Stream 2 project dead now, or is this just a short-term reaction to the unfolding events? Can Europe actually do without Nord Stream 2?

Paul Craig Roberts: Europe brought the high energy price on itself with its thoughtless sanctions; the high prices benefit Russia and hurt those who financed the Nord Stream 2 pipeline; Russia should consider turning off all natural gas to Europe and conserve its energy source for its own and China’s development.

Europe is nothing but a thorn in Russia’s side, a collection of Washington’s puppets. Russia owes Europe nothing.

0 thoughts on “Ex-US Official: Europe Brought High Energy Price on Itself With Its Thoughtless Sanctions on Russia”