HOME / WORLD / Nord Stream: The Geo-politics of Keeping Germany ‘Down’, Russia ‘Out’, and Instability in Ukraine 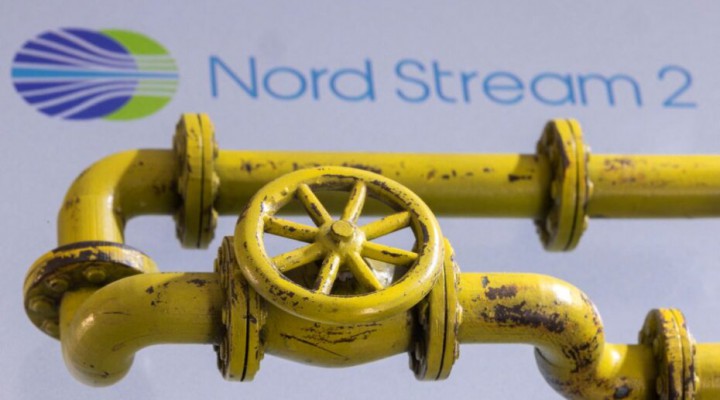 Macron in a remarkably frank interview with a French Journal put his finger on the main structural problems facing the EU: He lambasted the fact that the EU Council (and other EU states) had vetoed the earlier French-German proposal for a Russia-EU summit. The consequences to this omission, he said starkly, was that: ‘Others’ were talking to the Russians on the behalf of the EU. It’s not hard to surmise that he is implying that U.S. ‘interests’ (whether directly or via NATO ventriloquism) were the ones doing the talking. And that ‘Europe’ had lost its voice.

This is not simply a case of wounded amour propre by the French Jupiterian leader. It is rather, that some West European leaders (ie. the Carolingian Axis), belatedly have awoken to the realisation that the whole fake artifice of the ‘imminent Russian invasion’ of Ukraine is about corralling European states back into bloc (NATO) discipline. Macron – to give him his due – showed by his remarks at the Moscow press conference that he understood that silence at this crucial moment could define Europe for the next decades – leaving it bereft of the autonomy (let alone any modicum of sovereignty) that Macron so much wants for Europe.

The account of Macron’s press conference after his long tête-à-tête with Putin represents the contortionism of a French President unable to explicitly diss the dominant Anglo-American narrative on Ukraine, whilst saying – in barely coded language – that he was at one with Russia on all its complaints about the failed European security architecture, and the real risks of its toxicity for Russia that could lead to war in Europe.

Macron explicitly said that new security arrangements in Europe are absolutely needed. (In spite of his care not to poke the U.S. in the eye, he was clearly signalling a non-NATO ‘new’ arrangement). He also flatly contradicted the Washington narrative, saying that he did not believe Russia had an intent to invade Ukraine. Adding that in respect to NATO expansion, mistakes had been made.

Macron, in short, came out at complete odds with the Biden narrative of imminent war. He clearly risks an outpouring of Anglo-U.S. and some European wrath for unreservedly taking on board Putin’s ‘not an inch’ stance of full Kiev compliance with Minsk, and a complete settlement for Donbass, as his own. The French President subsequently travelled to Kiev to shore up the ceasefire on the Contact Line. Predictably, the Anglo press is now hailing Minsk II as a weapon being held to the head of Kiev – precisely loaded to fracture the state and trigger a civil war.

Macron, from his comments, seemingly understands that the Ukraine crisis – through posing grave risks war inside Europe – paradoxically does not lie at the heart of the Carolingian fears.

Strikingly, China is saying the same explicitly: The authoritative Global Times in an editorial warns that the U.S. is instigating conflict in Ukraine in order to tighten bloc discipline – to corral European States back into the U.S.-led fold. No doubt, China makes the connection that Ukraine provides the perfect pivot for shepherding Europe towards America’s next stage of requiring a united front with the U.S. for the later task of barricading-in China, behind her borders.

In play, therefore, are key decisions that will define Europe for the future. On the one hand, (as Pepe Escobar noted some two years ago), “the goal of Russian and Chinese policy is to recruit Germany into a triple alliance locking together the Eurasian land mass à la Mackinder into the greatest geopolitical alliance in history – switching world power in favour of these three great powers, and against Anglo-Saxon sea power”.

And on the other hand, NATO was conceived, from the outset, as a means of Anglo-American control over Europe and more precisely for keeping Germany ‘down’, and Russia ‘out’ (in that old axiom of western strategists). Lord Hastings (Lionel Ismay), NATO’s first Secretary General, famously said that NATO was created to “keep the Soviet Union out, the Americans in, and the Germans down”.

This mindset lingers on, but the formula has acquired today a greater import, and a new twist: To keep Germany ‘down and price uncompetitive’ versus U.S. goods; to keep Russia ‘out’ from being Europe’s source of cheap energy; and to keep China ‘fenced out’ from EU–U.S. trade. The aim is to contain Europe firmly within America’s narrowly defined economic orbit and compelled to forgo the benefits of Chinese and Russian technology, finance and trade – thus helping towards achieving the aim of barricading China within its borders.

Largely overlooked is the geo-political import: that China, for the first time, is directly intervening (taking a very clear and powerful stance) on a matter central to European affairs. In the longer term, this suggests that China will be taking a more politically orientated approach to its relations with European states.

In this context, at the Biden and Olaf Scholtz’s press conference in Washington this week – lit up, in flashing neon lights, for all to see – Biden literally bullied Germany into a commitment to scrap Nordstream 2 (should Russia invade Ukraine), reflecting Washington’s aim to keep Germany on the leash of bloc discipline. He effectively said that if Scholtz doesn’t bin Nordstream, then he, Biden, would do it: “I can do it”, he underlined.

Yet, the moment he gives that undertaking, Germany’s little slice of sovereignty is gone – Scholtz yields it to Washington. Moreover, Macron’s aspiration to some wider euro-autonomy is gone too, for without French and German policy alignment, EU ‘pretend sovereignty’ is gone. Moreover, if Nordstream is binned, EU energy security is blown away. And with little real alternative supply, the EU is nailed for good to expensive U.S. LNG dependency (with the likelihood of gas price crises at home, too).

It is not clear (and a likely source of anxiety for Macron), whether Germany’s refusal to give Biden his desired Nordstream ultimatum represents any meaningful reserve of Euro-sovereignty at all. What would happen were Washington to incite the Ukrainian militia ‘crazies’ into some outrage, or into a false flag attack that triggers mayhem?

Would Scholtz be able to hold his Nordstream ‘line’ in the ensuing frenzy that the Anglo-axis would whip up? The little space which Macron has been trying to free-up in order to resolve the Ukraine crisis, would evaporate in the moment.

All this underlines what a narrow ‘line’ Macron is trying to walk: Were Schulz ‘to cave’ over Nordstream, Macron’s aspirations to re-shape Europe’s security architecture inevitably would be perceived in Moscow – though laudable – as hollow for their lack of any real European agency.

And in the Ukrainian particular, Macron’s room for manoeuvre to prevent a war in Europe would be attenuated, since only by Macron (backed by the EU), acting in lockstep with Putin, would there be a chance to compel Kiev to implement Minsk II.

The list of Macron’s challenges do not end there: France has the EU rotating Presidency, but EU foreign policy requires unanimity amongst member-states. Can he get that? Will Team Biden become so angered at France playing the maverick, that Washington resolves to stick a spanner in Macron’s works?

Biden needs a foreign policy achievement for his campaign into the Midterms. And 63% of Americans say they would support massive sanctions imposed on Russia, were Moscow to invade Ukraine. Biden is known to believe in the adage that ultimately all politics – including foreign policy – is subservient to domestic electoral needs. Heavily sanctioning Russia – with Europe acting in lockstep – is just the step that would likely be seen in the White House as giving his ratings a needed fillip. (And not unprecedented: Recall Bill Clinton, under pressure over the Lewinsky exposé, triggered the Balkan war to distract from his personal predicament).

Not surprisingly, President Putin is cautious. Is Macron, who says he has consulted widely, speaking for the EU? And most important of all, where does Washington stand in this?

The most significant point to grasp from the Putin–Macron episode is that it gave the lie to the idea that Moscow is somehow hoping to open negotiations with the West on secondary issues, as a possible gateway to Russia’s existential concerns. Russia is open to negotiations, but only in respect to Putin’s three red lines: No NATO (including stealth NATO) in Ukraine; no strike missiles on Russia’s border; and the roll-back of NATO to the lines of 1997. Putin did not give an inch on the latter; he gave not an inch either on Minsk as the only solution in Ukraine. Putin did not give at all the impression of a man liking negotiating for the sake of negotiating.

Bottom line: No easy fixes. Even if conflict is frozen or paused over the short term, it will not hold longer-term, as the West refuses to acknowledge that Putin means what he says. This likely will only change through the sides’ experience of pain. The West, for now, sits sanguine in the belief that it has escalatory preponderance in the application of pain. We’ll see how true that proves to be.

It seems reasonable to expect we will have this crisis with us – in its various forms – for at least the next two years. These political initiatives mark but the start of a drawn-out, high-stakes, phase of a Russian effort to shift the European security architecture into a new form which the West presently rejects. The Russian aim will be to keep the pressures, and even the latency, of war ever-present, in order to harass war-averse Western leaders to make this necessary shift.

0 thoughts on “Nord Stream: The Geo-politics of Keeping Germany ‘Down’, Russia ‘Out’, and Instability in Ukraine”