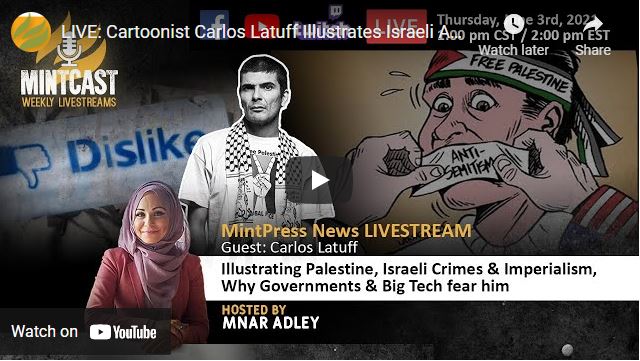 Carlos Latuff gained widespread fame during the Arab Spring when his cartoons helped fuel revolutions across the region. Reuters called him a “hero” of the movement while The Guardian described him as the “unlikely star” of the revolt.

It is often said that a picture paints a thousand words; images have the ability to move people in ways that words alone cannot.

Iconic pictures from war zones, such as those of a dead Syrian child on the beach, of Vietnamese girls covered in Napalm or American soldiers planting their flag at Iwo Jima, become anchors around which people understand conflicts, and the world more generally. Cartoons as well have the power to challenge and change people’s minds, satirizing the powerful and revealing hypocrisies in humorous ways that often push through people’s ideological barriers.

The powerful understand the potential of the image, so all over the world political cartoonists are censored and repressed. In 2015, Malaysian satirist Zulkiflee SM Anwar Haque — better known as Zunar — was charged with sedition and faced 43 years in jail before a change in government led to the case being dropped. Four years later, Turkey jailed artist Musa Kart after he was accused of aiding the banned Kurdistan Workers’ Party. And after pushback over a cartoon critiquing the Israeli government’s relationship with the Trump administration, The New York Times decided to shut down its entire political cartoon operation, announcing that it would no longer print them.

In the days of social media supremacy, many cartoonists are completely reliant on big tech companies like Facebook and Instagram for both their audience and their income, putting them in serious danger of being both silenced and impoverished if Silicon Valley decides it does not like their message.

Today’s guest is Carlos Latuff, a Brazillian political cartoonist who has built up a following all over the world. Often compared to street artist Banksy for his style and his cutting political commentary, his art graces the pages of a host of independent media outlets, including MintPress News.

Carlos was born in Rio de Janeiro in Brazil and describes himself as a “visual chronicler of barbarism.” Highly politically charged, his cartoons have won him both followers and enemies. He has been arrested multiple times due to his criticisms of the government and the police in his home country, while he is regularly tarred as anti-Semitic by defenders of the Israeli state, a charge he laughs off as “a joke worthy of a Woody Allen movie.”

Carlos became particularly well known during the Arab Spring when his cartoons helped fuel revolutions across the region. Reuters called him a “hero” of the movement while The Guardian described him as the “unlikely star” of the revolt.

Always political and edgy, Carlos frequently takes aim at major centers of world power, including governments like those of the United States, Israel and his native Brazil, as well as at a mainstream corporate media that distort reality and allow injustices to continue on unnoticed by the general public.