HOME / Multimedia / Asa Winstanley on the Purging of Socialists from the U.K. Labour Party

Asa Winstanley on the Purging of Socialists from the U.K. Labour Party 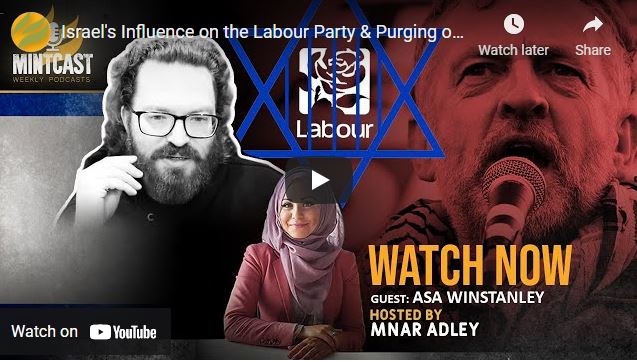 Aside from Corbyn, among those purged have been filmmaker Ken Loach and activist Jackie Walker, in what appears to be an attempt to eradicate all traces of socialism and anti-imperialism from Labour.

Shocking almost everybody in positions of power, life-long socialist and anti-war activist Jeremy Corbyn was elected leader of the British Labour Party in 2015. There was no honeymoon period for the Londoner, however, as right away the media, the government and even senior members of his own party began attempting to oust him.

Defying the critics, Corbyn held on and took Labour to arguably its greatest-ever electoral success in 2017. However, his poor handling of Brexit and an unprecedented phoney anti-Semitism smear campaign sank his chances of becoming prime minister of the United Kingdom.

Our guest today on Mintcast saw the entire situation unfold from up close. Asa Winstanley is a London-based investigative journalist at The Electronic Intifada. A former member of the Labour Party, like Corbyn, he was suspended from the party, in his case after he called the Jewish Labour Movement an “Israel embassy proxy.”

Corbyn — a veteran anti-imperialist who opposed nuclear weapons, proposed the United Kingdom leave NATO and supported a targeted boycott of Israel over their annexation of much of Palestine — was immediately attacked by sources of entrenched power. U.S. Secretary of State Mike Pompeo even stated that his government was “doing its best” to prevent Corbyn from being elected.

Despite a near-hysterical campaign against him, Corbyn’s popularity grew and grew. His 2017 manifesto — which included making college free for all and proposed a huge expansion of social housing, an end to government austerity measures, nationalizing key industries like railways, and providing everyone in the country with free high-speed internet access — was immensely popular.

However, by the 2019 general election, years of attacks from the media, the military and even most of the elected officials within his own party had taken their toll, and Labour lost the contest to Boris Johnson’s Conservative Party. In the three months prior to the vote, there were 1,450 articles in national British newspapers linking Corbyn to anti-Semitism.

Corbyn took no action against those rebelling against him, even those Labour politicians who were openly campaigning for the Conservatives to win. But when he stood down, revenge was swift, as the Labour establishment under Sir Keir Starmer began purging socialists from the Labour Party en masse, under the guise of a cooked-up controversy over anti-Semitism — a storm wherein the new leadership equated any vocal opposition to Israeli foreign policy with anti-Jewish racism.

On Israel and most other issues, Sir Keir Starmer is the polar opposite of Corbyn. As Winstanley himself has noted, Starmer is funded by the Israel lobby and says he supports Zionism “without qualification.” He has also handed over increasing and unprecedented powers to the Israel lobby, allowing the group to draw up hit lists of individuals to be thrown out of the party. Earlier this year, Labour also hired a former Israeli spy from the infamous Unit 8200 to manage its communications.

Aside from Corbyn, among those purged have been filmmaker Ken Loach and activist Jackie Walker, in what appears to be an attempt to eradicate all traces of socialism and anti-imperialism from Labour.

Asa Winstanley joined Mintcast host Mnar Adley today to discuss his work covering this case, and also talks about the wider implications of the affair. Originally from South Wales, Winstanley focuses his work primarily on the Middle East and British politics. Apart from being an associate editor at The Electronic Intifada, he also writes at Substack and The Middle East Monitor.

The Canary’s Kerry-Anne Mendoza On Censorship, Smear Campaign Against Left In The UK

0 thoughts on “Asa Winstanley on the Purging of Socialists from the U.K. Labour Party”