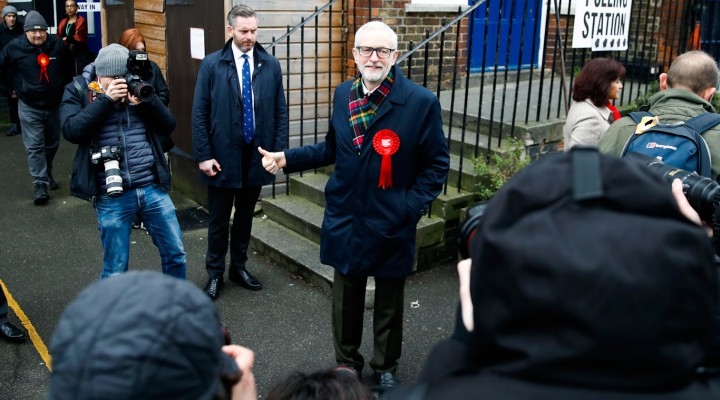 Corbyn easily won his own seat, but many of his party members did not share the same fortune, as Labour’s heartlands were lost on a dark day for the British left.

MPN– After its worst electoral performance in decades, Jeremy Corbyn announced last night that he would be resigning his position as leader of the Labour. “I will not lead the party in any future general election campaign. I will discuss with our party to ensure there is a process now of reflection on this result and on the policies the party will take going forward,” he said in his resignation speech, on a night that saw Labour lose 59 seats in the British parliament, dropping their number to 203. In contrast, the Conservatives, campaigning on a “Get Brexit Done” platform, achieved 365, comfortably above the 326 seats necessary for an outright majority.

Corbyn easily won his own seat, but many of his party members did not share the same fortune, as Labour’s heartlands were lost on a dark day for the British left. As recently as 2010, the party won 41 seats and 42 percent of the total vote in Scotland, for instance. But last night Labour was reduced to a single Scottish MP, the fiercely anti-socialist neoliberal Ian Murray, who has spent much of the last four years attempting to overthrow Corbyn. Last night he remarked that “For the sake of the Labour movement, for the sake of the Labour Party, but more importantly for the sake of the country, not only does the person have to go, but the policy and the ideology has to go as well.”

Labour’s “Red Wall” across the Midlands and north of England was severely damaged as well, as the party lost many of its most notable Members of Parliament. 32-year-old rising star Laura Pidcock, who many had tipped as a future leader, lost her Durham seat. And Bolsover failed to elect veteran socialist Dennis Skinner for the first time since he originally stood in 1970. This, for Labour Chairman Ian Lavery, was due to the party’s decision to embrace a second referendum on Brexit, which amounted to “ignoring democracy,” in his words.

“What we are seeing in the Labour heartlands is people very aggrieved at the fact that the party has taken a stance on Brexit in the way they have. 17.4 million people voting for Brexit and basically being ignored is not a good recipe,” he said.

While Labour lost votes in most areas last night, the decline was far worse in areas that voted to leave the EU (such as Durham and Bolsover), where the party saw its share of the vote decline by 10.4 percent compared to 2017.

Poor voter participation usually hurts progressive candidates, and turnout yesterday was around 67 percent, lower than the previous election. No matter what, the elderly tend to vote. But only 14 percent of those over 60 and 9 percent of over 70s intended to vote for Labour, with around 50 percent expecting to choose the Conservatives, according to a recent YouGov poll. While Labour did construct a large social and alternative media network to counter mainstream bias against them, there was little outreach to older voters who continue to rely on corporate media for their information, news and views.

Corbyn has been subjected to one of the longest and most intense propaganda campaigns in history. He has been labeled everything from a terrorist sympathizer, a communist spy, a national security threat, and an anti-Semite and condemned for not bowing low enough, riding a “Chairman Mao-style” bicycle and not singing the national anthem loudly enough. One academic study of the coverage found that 75 percent of articles on him misrepresented him or his views.

All of this was designed, the study suggests, to keep up a relentless flow of negativity in the hopes that one slander would stick and that the idea of Corbyn being an untrustworthy character would seep into the collective consciousness. In their own trust’s study of their coverage, the BBC found its chief political editor Laura Kuenssberg’s reporting to be biased. Kuenssberg went so far as to publicly announce the postal vote tally ahead of schedule, claiming things were “looking grim” for Labour in a likely illegal move sure to have swayed the vote.

The centrists and mainstream media outlets are responsible for the right wing win in the UK. They spent all their time bashing and smearing Jeremy Corbyn bc they will always prioritize smashing the left, even if it means allying with the far right. Shameful.

Johnson’s comfortable majority effectively gives him a mandate to pull the UK out of the EU at any cost, and to rule as he wishes for the next five years. That, according to leaked documents, includes privatizing Britain’s National Health Service (NHS), allowing American corporations to swoop into a new market. Often seen as the crowning achievement of the welfare state, the NHS was built by Clement Attlee’s Labour government in the wake of the Second World War and is the number one source of national pride in the country, according to polls. That it is now under threat will be of grave concern to all those in the UK, not least to the elderly citizens who rely on it and who enabled its ransacking by voting for Johnson yesterday.