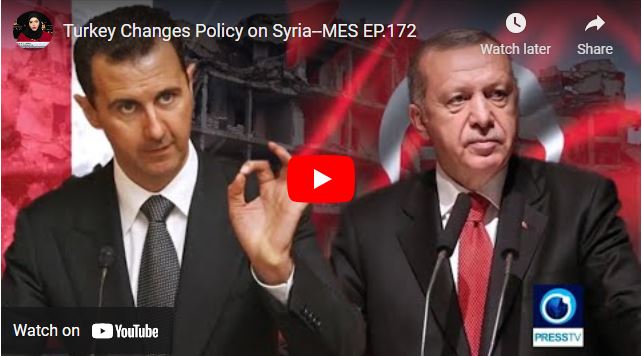 The chorus of Turkish officials calling for engagement with the government of Syrian President Bashar Assad is growing louder by the day. The moves are calculated to draw votes ahead of elections and weaken Kurdish aspirations for autonomy.

They are backed by Russia as it seeks to create an international coalition against its Western foes.  It does not seem that the recent Turkish escalation in northern Syria will lead to obstructing the path aimed at normalizing relations between Ankara and Damascus, despite the reluctance of the parties loyal to Turkey to push this path forward, and their attempt to obstruct it in any way.  Despite the persistence of differences on many points, the humanitarian file, will indeed constitute a guaranteed window for partial Syrian-Turkish cooperation.

To discuss this issue with us from Beirut is Professor Jamal Wakim, academic, author and political commentator.

Two of his many published books are:
– Turkish foreign policy towards the great powers and the Arab countries.
– The Great Power Struggle over Syria: The Geopolitical Dimensions of the Syrian Crisis.

Meanwhile, The Iraqi political scene is becoming more and more ambiguous after the leader of the Sadrist movement, Muqtada al-Sadr, rejected the outcomes of the dialogue of the political forces that had called on the Sadrist movement to engage in dialogue to get out of the political crisis. Al-Sadr, called on the Iraqi judiciary to dissolve parliament before the end of this week, stressing that his supporters will continue their sit-in near the parliament inside the Green Zone in central Baghdad.

Meanwhile, Iraq’s Kata’ib Hezbollah issued a statement calling on wise people to calm down, respect the judiciary, resort to the constitution and present the principle of reconciliation and peaceful solutions, instead of escalation with threats and coercions.

To discuss this issue with us from London is Robert Carter producer, journalist and political commentator.