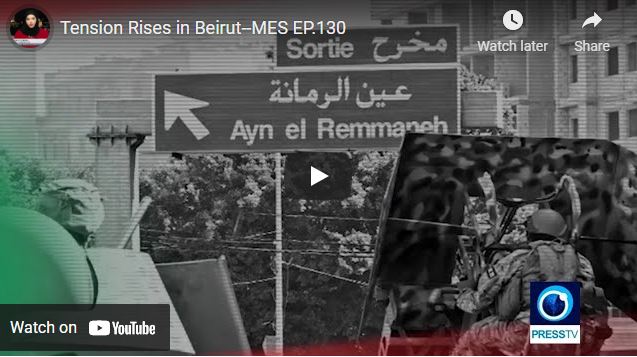 A prominent development was recorded last week in Beirut in the investigation file into the Tayouneh massacre, with the decision of the government commissioner to the military court, Judge Fadi Akiki, to summon the head of the Lebanese Forces militia, Samir Geagea, against the background of investigations conducted by the Intelligence Directorate. This indicates a real intention of the Lebanese security apparatus to delve into the available data regarding the night before the clashes, after information was available indicating that there was an intent to prepare for a confrontation or to at least draw the resistance camp into an armed clash.

To discuss this issue with us from Beirut is retired Army general Elias Farhat.

Meanwhile in Syria, although the attack carried out by the “Axis of Resistance” forces in Syria on the American base of al-Tanf is linked to the recent Israeli raids that targeted an overnight camp in the Homs desert about 10 days ago, it is not possible to separate this attack from the new strategy that is taking path to uproot the American occupation forces from Syria, through both political and military pressure. The latest attack, which appears to have been carried out by the “Syrian Allies Operations Room”, which includes several factions, in response to the Israeli-American raids that targeted one of its sites near Palmyra, was very precise, as the drones penetrated the 55-kilometre-long fortified area, reaching the base and successfully carrying out its mission.

To discuss this issue with us from Damascus is Dr. Tim Anderson, author, academic and Australia coordinator of the global gathering in support of the choice of resistance.