HOME / WORLD / Towards peace in Syria and Lebanon 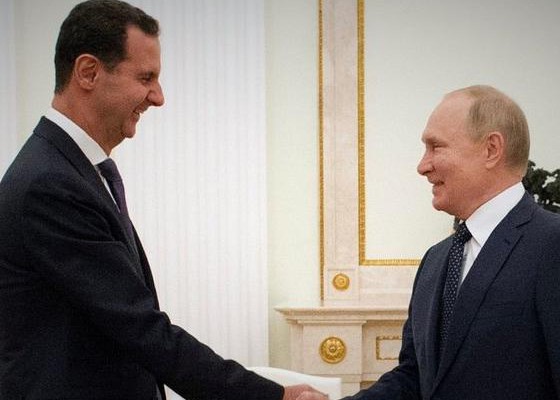 The agreements reached between Presidents Joe Biden and Vladimir Putin following the Western military defeat in Syria are beginning to be implemented in the Middle East. The next steps should be the withdrawal of US forces from Iraq and Syria, the expulsion of Turkish forces from northwestern Syria, the return of Iran to the concert of nations, the return of the Golan Heights and finally the Russian-Syrian administration of Lebanon.

The consequences of the Geneva Accords – known as “Yalta 2” (June 16, 2021) – for the wider Middle East are about to reach a new stage: foreign forces occupying parts of Syria are about to withdraw. After 12 years of massacres, the war against the Syrian Arab Republic is ending.

President Bashar al-Assad went to the Kremlin. Nothing transpired from his meeting with his Russian counterpart. However, it seems that Moscow will supervise both Syria and Lebanon from the Lebanese parliamentary elections in May 2022. If Washington does not keep its word, Syria could be admitted to the Collective Security Treaty Organisation (CSTO), the military alliance around Russia. In such a case, Moscow’s support for Damascus would increase considerably as Syria would move from being a friend to an ally. Any attack on its security would be an attack on Russia’s.

In recent weeks, the “rebels” of Deraa (in the south of the country) have laid down their arms. They had already done so with a Russian general, then mobilised again against Damascus at the request of Saudi Arabia. They finally surrendered after Israel withdrew its military support.

This is an important event that marks the evolution of the Tel Aviv regime. Since the resignation of Benjamin Netanyahu, Israel is freeing itself from the colonial ideology of Ze’ev Jabotinsky and trying to become a state like any other. The government of Naftali Bennett (despite its rhetoric) and Yair Lapid has agreed to stop supporting armed groups in Syria. However, this does not prevent it from continuing its secret war against Iran on Lebanese and Syrian territory. Especially if Tel Aviv accepts many concessions, it stands firm on the occupation of the Golan Heights, which it has illegally annexed under the UN.

Commenting on President Bashar al-Assad’s visit to Moscow, Russian Deputy Foreign Minister Sergei Ryabkov told Russia Today in an interview in Arabic that Russia intends to free all of Syria from all foreign forces illegally stationed there: the Israeli, Turkish and US. The Golan Heights are being returned in exchange for an Iranian withdrawal from Syria.

Jordan, which has never committed itself against Syria but has let the US and Saudi Arabia use its territory to fight Damascus, seems relieved.

The rebels in Deraa, anticipating what would happen next, refused to leave for Idleb (in the north of the country). They preferred to lay down their arms without any compensation.

The next step must be the withdrawal of US and Turkish troops from the north of the country, the surrender of Kurdish mercenaries and the flight of the jihadists amassed in Idleb. This is where the problem lies: Turkey refuses to leave. For it, Idleb is an area that it has claimed since the “National Oath” of 1920 [1]. Ankara had welcomed the occupation as a step towards restoring Ottoman grandeur. Its withdrawal would mean not only the loss of this territory, but the failure of its neo-Ottoman dream.

This is why President Recep Tayyip Erdoğan, during his speech at the 76th UN General Assembly, reawakened the threat of his support for Tatar terrorism. In 2015, Turkey and Ukraine had officially created an International Islamic Brigade against the attachment of Crimea to Russia [2]. Three months later, the Turkish army shot down a Russian Sukhoi, causing a serious political crisis. But this episode was short-lived. The anti-Russian terrorist option was abandoned in 2016 and President Erdoğan apologised for the “incident”.

Disrupting the chessboard, the CIA attempted to have President Erdoğan assassinated. The operation failed and turned into an improvised coup, which also failed. To everyone’s surprise, Ankara then turned to Moscow and signed deal after deal for the Turkish Stream gas pipeline and finally for the purchase of S-400 anti-missile systems.

Today Ankara finds itself in a difficult position as it stands against Moscow and Washington at the same time. Its threat to reactivate Tatar terrorism is credible insofar as Recep Tayyip Erdoğan, before becoming president, was an important actor in the wars in Afghanistan and Chechnya. He gave the support of the Millî Görüş to Gulbuddin Hekmatyar in Afghanistan, and then offered a rear base to the terrorists of Dokou Oumarov for their Emirate of Itchkeria (Chechnya).

It is obviously unlikely that Russia will give in to Turkish blackmail this time, since it did not do so in 2015. Moscow is not Brussels, which cowardly paid $5 billion during the migrant blackmail. In any case, even if the Turkish threat does not have to go through, stating it raises the stakes. President Erdoğan does not intend to give in without strong compensation.

The withdrawal of US forces from Iraq and Syria will leave the Kurdish mercenaries unprotected just as the withdrawal of US armies from Afghanistan left the local CIA collaborators to their fate. Given the crimes they have committed, especially against Christian Arabs, a panic is beginning to set in. Some of them are already in negotiations with Damascus.

The secret meeting of the US and Russian chiefs of staff, Generals Mark A. Milley and Valery Gerasimov, on September 21 in Helsinki, dealt with the Syrian issue. It is not known what the two men decided, but General Miley is a strong supporter of Joe Biden and would not sabotage his commitments.

Iran, which has established itself as an economic power under Mahmoud Ahmadinejad and as a military power under General Qassem Soleimani, is about to be integrated into the concert of nations.

While official negotiations on its nuclear status have stalled, secret contacts are increasing.

The US has now agreed to put Iranian nuclear research into perspective as long as it is peaceful. In the last year of the war imposed by Iraq on Ruhollah Khomeini’s Iran, Tehran forbade itself to build the atomic bomb, a project that the US and France had developed with Shah Reza Pahlevi. Iran only lifted this ban after President Donald Trump assassinated General Qassem Soleimani. There is no indication that Tehran has since resumed this project.

The fact that Washington and London have revealed their nuclear pact with Australia means that these two major powers can no longer accuse Iran of proliferation.

The US has also given up on dividing the Muslim world into Sunni and Shia. Solid contacts are being established between the brotherly enemies that Saudi Arabia and Iran had become. The latest was a secret meeting between the heads of the two countries’ secret services on September 23 at Baghdad airport.

Tehran should give up some of its military actions and concentrate on the defence of Shiite communities in the world (including Latin America). The Revolutionary Guards could therefore leave Syria and give more room to the Lebanese Hezbollah.

On the diplomatic front, the embassies of EU member states in Damascus have almost all reopened (but not the French one). It seems that the EU has financial obligations imposed by an old UN resolution. In any case, Brussels is providing $7 billion to rebuild Syria’s infrastructure. Strangely, the European Commission, which continues to employ 6,000 British civil servants more than a year after the Brexit, is represented in Syria by the British NGO Oxfam (which had supported the White Helmets terrorist group). In any case, the EU officially remains on the position stated by US ambassador Jeffrey Feltman when he headed the UN four years ago: not a penny for the reconstruction of Syria until the “regime” has fallen [3].

The question that remains open is whether or not Lebanon will return to Russian-Syrian administration. The answer will determine Chinese involvement in the region.

For the moment, the three Lebanese presidents (of the Republic, the Government and the Parliament) are compatible with the administration of President Bashar al-Assad. However, President Bashar al-Assad, who was unjustly accused of having instigated the assassination of former Lebanese Prime Minister Rafik Hariri and whose troops were booed in Beirut, does not seem to want to play this role. This would be the wisest solution.

The announcement of a possible candidacy for the presidency of the Lebanese Parliament of the Director of General Security, General Abbas Ibrahim, is interpreted as the entry into the race of a man aware of the culture of Greater Syria. Until the Sykes-Picot-Sazonov agreements of 1915, which planned the creation of Israel, Jordan, Lebanon, Syria and Cyprus, these five states formed the same Ottoman province.

In the event of a Syrian trusteeship over failed Lebanon, China would step in to rebuild the end of the ancient Silk Road. In ancient and early medieval times, the Silk Road linked the then Chinese capital, Xi’an, to the Mediterranean via Palmyra and Damascus. Beijing plans to build both a land and rail route as well as telecommunications infrastructure. This would be a very important victory for Presidents Vladimir Putin and Xi Jinping as part of the war on Syria was explicitly aimed at preventing this project.

It would be surprising if the US, which has forced Israel to cancel all its contracts with Beijing, were to let Russia install China in Syria without a quid pro quo.

France, once the colonial power of Lebanon and Syria, does not intend to be ousted. Last month, President Emmanuel Macron attended the Baghdad summit, under the watchful eye of the British secret service.

France and the United States played a central role in the appointment of Najib Mikati as the new strongman of the Lebanese Sunni community and consequently as the new Prime Minister (this function being reserved for a Sunni). The Westerners favoured the man who is now, according to Forbes, the richest man in the country, as Rafik Hariri had been. To achieve this, they eliminated the Hariri family with the help of Saudi Arabia. The assets of Saad Hariri (the son, who was also Prime Minister) were seized by court order. The operation should soon continue with the seizure of his assets in Lebanon. Najib Mikati, who is no more honest than he is, depends on Washington and Paris insofar as his fortune is dispersed in states under Western tutelage. He is as much a symbol as the Hariri’s of the use of Lebanon as a pirate state in the Western economic system. It does not subscribe to any of the Western rules, but is used for all the West’s secret transactions, especially drugs and telecommunications. In this respect, Lebanon is comparable to Israel, although the self-proclaimed “Jewish state” specialises in secret diamond and arms deals (including software). In both cases, the profits of the rulers do not benefit the population.

France’s support for Najib Mikati is aimed at preventing Lebanon from becoming a real nation and no longer an aggregate of communities. Paris will therefore do its utmost to ensure that the next parliament is elected according to the iniquitous rules that have prevailed until now. Lebanon is the only country in the world where the majority of parliamentarians are elected from father to son. To ensure that a democratic rule is not adopted, France intends to deploy its troops and secure the polling stations during the May 2022 elections. Denying the origin of the problems, it prioritises economic over political reforms.

Only once the political landscape is stabilised can the exploitation of hydrocarbons in Israel, Lebanon and Syria begin. It is necessary to delimit the maritime borders that were vaguely drawn by the Sykes-Picot agreements, but never precisely fixed.

0 thoughts on “Towards peace in Syria and Lebanon”