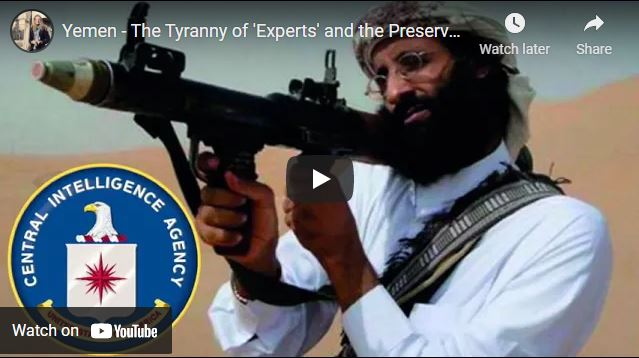 We will be covering a lot of hidden ground in the Yemen conflict – effectively a genocidal war waged by the US and UK and Israel by their Saudi, Qatari and UAE proxies. Isa Blumi delves into the realities that are obfuscated by the Legacy Media and Academic embeds, think tanks and narrative managers.

Speaking above Yemenis: a reading beyond the tyranny of experts, Global Intellectual History

Excerpt from the introduction

“How will historians a generation or two from now write about this war on Yemen? Will there be any interest in inspecting more deeply what happened, why, and under whose watch such a crime was committed? Or will future historians resort to repeating the dominant frames used to characterize (or ignore) this war on Yemen used today?”

“No doubt those considering a deeper look will first consult the media’s archives. What they will be surprised to see, perhaps, is how much this disaster in Yemen has been kept out of the daily news. By all accounts, those committing hundreds of billions of dollars to a war on Yemenis would prefer that little to no attention be spent on its atrocities. Corporate media have been happy to oblige.3

“Trying to answer why the images of emaciated children and the upwards of 18 million civilians threatened by starvation are not making headlines across the world could itself become the heart of any future study on Yemen’s war. Such a task will require, however, moving beyond the security-centered, international relations’ frames of analysis prevalent in the available scholarly literature today. Present-day scholars and experts whose salaries are paid by the very regimes imposing this war may prove unhelpful in explaining the journalistic Omerta future historians will wish to study.4

“The conventional narrative about the war unleashed by ‘coalition’ forces positions the US-led ‘global community’ as a benevolent agent simply aiming to reinstate the ‘legitimate’ presidency of one Abd-Rabbu Mansur Hadi for the sake of regional stability. Rarely highlighted any longer, this politically meek former vice president was the anointed partner to interests that, in reaction to uprisings in 2010–2011 against globalization, sought to suppress what is known as ‘the Arab Spring’ by imposing a reliable ‘interim government.’5

Appointed in 2012 as an alternative to the no longer useful Ali Abdullah Saleh (president since 1978) and a barrier to ‘radical’ populist groups pushing for the reversal of austerity policies, the Obama and May administrations gave Hadi the task of continuing Yemen’s highly unpopular integration into the global economy that had been interrupted by those 2010–2011 ‘change’ uprisings.

“Mischaracterized as ‘support’ for America’s imposed counter-revolutionary solution, most of those protesting in 2011 were willing to give the US-directed process a chance considering they faced treats of perpetual violence from various factions vulnerable to populist demands for radical change.

“The trouble proved to be that Hadi’s actual mandate was to push even more aggressively the very ‘structural adjustments’ against which Yemen’s people protested in the first place. The violence and economic destitution this interim 2012–2014 period produced is all but forgotten in 2019. Such amnesia is critical as it makes it possible today for think tank employees to insinuate that there was no justification for Hadi’s removal from the seat of the Yemeni government after his interim two-year
period ended in mid-2014″