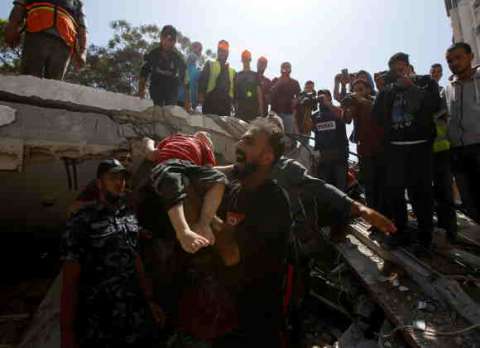 Against the odds, the Palestinians are winning this first round in the next stage of their long struggle

The ability of Palestinian resistance groups in the Gaza Strip to continue launching missiles against Israeli cities and settlements for a second week is in itself a victory and a mark of Israeli failure. Israel’s security and military establishment has been making every effort to score a military success it can sell to a worried public to justify withdrawing from the developing war of attrition. But the Palestinian resistance has no intention of letting it.

The Americans are doing their best to extricate Israel from its self-inflicted predicament. This is not out of any concern for the Palestinian side. They are entirely untroubled by the slaughter of over 200 people so far, including 58 children and 34 women. They only want to halt the missile volleys that have sent millions of Israelis scurrying into their shelters for the past week.

This ‘missile intifada’ has saved the Gulf states that normalised relations with Israel billions of dollars. They had intended to buy Israeli Iron Dome anti-missile systems. Netanyahu persuaded them that these were more effective than the American-made Patriots that failed to intercept the missiles and drones launched by Yemen’s Ansarullah (Houthi) alliance. They fell for it. But now they wonder how the Israelis can protect them when they cannot even protect themselves.

The Israeli army has not achieved any significant military objective in the first week of this war — other than to murder and maim innocent civilians, flatten high-rise buildings including media centres, and kill a couple of Hamas and Islamic Jihad field commanders. It has failed to reach the two groups’ leaders and joint operation rooms, or their missile platforms and factories and their operators. Instead, it lashed out against those leaders’ family homes in residential areas – reflecting both its frustration and the failure, yet again, of its much-vaunted intelligence.

Meanwhile, daily life in Israel has been paralysed. Its covid-hit economy faces the prospect of further capital flight, as happened during previous Palestinian uprisings, and thousands of dual-national Israelis are again making plans to return to their countries of origin.

Israel’s threat to mount a ground invasion of the Gaza Strip is bluster. Going in might be relatively easy, but staying in or getting out again would be extremely difficult and massively costly.

The Palestinian resistance groups will not agree simply to ‘restore calm’ so that the occupation, blockade and oppression can continue in peace and quiet. Any cease-fire will have to be on their terms and timing. Claims that Israel has been resisting US efforts to achieve a cease-fire are eyewash. Under the table, they have been pressing their allies in Egypt, Qatar and Jordan hard, and offering them inducements, to broker a truce.

Their problem is that their nightmare has come true: Palestinians in the West Bank and Gaza, Jerusalem, the 1948 areas, and the diaspora rising up simultaneously against their oppression and dispossession, with the support of countless millions of people in the Arab world and globally. This just months after the US and Israel, and their Western and Arab clients, tried to persuade the world that the Palestinians and their cause were dead and buried and need only concede final defeat to an invincible Israel.

By bringing their cause to the fore once again, and exposing Israel for what it is, the Palestinian people have already won this first round of the next episode in their long hard struggle.

0 thoughts on “Israel’s failure in Gaza”