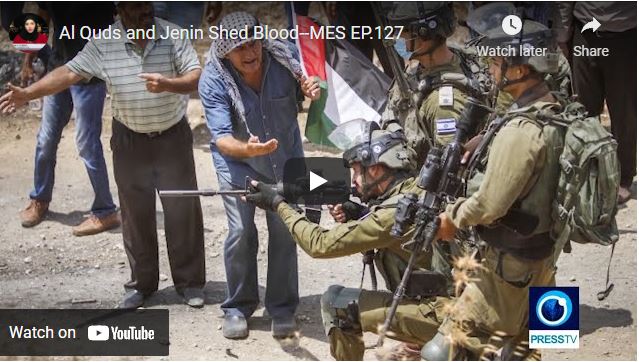 In the West Bank, the Israeli occupation forces face a real challenge in the city of Jenin in the north, where they are met with retaliatory live bullets rather than rocks, as in other areas.

When Zionists storm the rest of the West Bank, they are faced with stones being thrown at them by young men; But in Jenin, natives fire live ammunition at the occupation forces, and armed clashes erupt.

The last of these clashes occurred at dawn last Monday, when the occupation forces penetrated to arrest a Palestinian youth, and an armed clash erupted, resulting in the death of 4 Palestinians. It was not enough killings for Israelis that they later on Thursday morning killed 30-year-old mother of four, Israa Khuzaymah, near Bab al-Silsila in occupied ALQuds. Israa who is from southern Jenin was accused without evidence by the Israeli occupation forces that she was trying to stab one of the soldiers. The city of Jenin and its camp still possesses the nucleus of Palestinian resistance in the occupied territories after 20 years of the invasion carried out by the occupation army on the city and the West Bank under the name of “the protective fence”. The fence is falling apart and Jenin will be the first to crush it.

To discuss this issue with us from the occupied west bank is Dr. Amal Wahdan, human rights advocate and member of the global gathering in support of the choice of resistance.

The official Bahrain News Agency reported that “King Hamad reviewed with Lapid the course of bilateral relations and the steps that contribute to strengthening areas of cooperation between the two countries, in light of the signing of the Declaration of Support for Peace and the Abraham Accord Agreement.” Yes, he said peace, while Palestine just held 7 funeral processions last week alone for natives killed by the occupation’s bullets. No shame whatsoever. The visit of Israeli foreign minister Yair Lapid to Bahrain can be summed up in one word, Treason. This is how the Bahraini people feel and ow every Arab, Muslim and free soul on this planet feels. No king, emir or president will ever be able to remove Palestine from the hearts and minds of people and they will all never wash the stain of this crime from their hands.

We discuss this issue with us from London Dr. Ali Al Faraj, Bahraini activist.