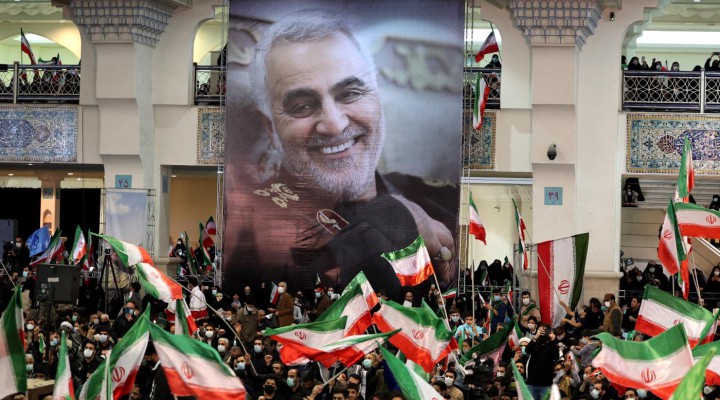 If the killing was meant to push Iran back, it has failed abysmally. Soleimani’s ability to maintain a modicum of stability outweighed any benefits that his death could have brought

Two years have passed since Qassem Soleimani, commander of the Quds Force of Iran’s Islamic Revolutionary Guard Corps (IRGC), was killed by a US drone strike on the tarmac of Baghdad airport.

Soleimani was the brain behind Iran’s shadow war in the Middle East, and for years the counterpart of US Central Command (Centcom) leaders and CIA directors, as he boasted about in a text message he allegedly sent to General David Petraeus, the former US military commander in Iraq.

In the process, Soleimani became a local hero against western hegemony in the region, the main enabler of the resistance for large Shia constituencies spread around Iran, Iraq, Syria, Lebanon, Afghanistan, Yemen and Gaza. But he also crossed the sectarian divide, garnering significant support from the Kurds and other Sunnis. Millions turned out onto the streets of Tehran and his hometown of Kerman to see his coffin, in a collective show of grief not seen since the funeral of Ayatollah Khomeini in 1989.

For the West, Israel, their Arab partners, the Syrian opposition to Bashar al-Assad, and the Yemeni opposition to the Houthis, he was the mastermind of Iran’s many acts of terror. But has his assassination significantly altered the Middle East’s strategic landscape? Has his removal fulfilled the purpose for which it was conceived?

More has come out about the assassination. At the time, the Donald Trump administration claimed that Soleimani was killed to pre-empt a major strike that he was planning. This has now been debunked. There was no imminent threat from Iran against US personnel in the region to justify the strike carried out in Baghdad on 3 January 2020.

More recently, Trump has hinted about Israeli manipulation behind his decision to eliminate the top Iranian strategist, adding unequivocally, however, that ″the Israelis are willing to fight Iran until the last American soldier″. Trump’s statement was ambiguous, but Major General Tamir Hayman, former chief of Israeli military intelligence, was not. He confirmed Israel’s role in the killing.

If Jerusalem had then nurtured any hope to remain shielded from Tehran’s wrath, Trump’s and Hayman’s words have dashed it. Israeli decision-makers should keep in mind that, as observed previously, Tehran’s response to Soleimani’s killing could take years to unfold.

The then prime minister of Israel, Benjamin Netanyahu, thought he was being clever in persuading Trump to withdraw from the Iran nuclear deal, the Joint Comprehensive Plan of Action (JCPOA), in 2018, and apparently twisted his arm in doing the dirty work of Soleimani’s elimination for Israel. However, it is becoming clear that neither decision served Israel’s national interest, not to mention that of the US.

Thanks to Washington’s withdrawal from the JCPOA, Tehran is now closer than ever to the nuclear threshold.

As far as the strategic landscape of the region is concerned, it is doubtful that the relative position of Israel or the US has improved. True, Israel has carried out a smart engagement policy with some Arab states, which has produced significant economic results, mainly with the UAE.

Important developments are also forthcoming with Bahrain and Morocco, but it is still too early to say if they will have a strategic impact. Until Saudi Arabia, jewel in the crown of Israeli normalisation with the Arab world, joins the Abraham Accords, the judgment remains suspended.

On the other hand, and enlarging the perspective, there have been some other important developments:

The US has humiliatingly withdrawn from Afghanistan, losing the game in Central Asia, with potentially serious repercussions in Western Asia, too; the Iraqi parliament has voted for the US’s complete withdrawal from the country; the Syrian government maintains and consolidates its grip on the useful part of its country, as once-hostile Arab leaders are now increasingly going back to Damascus; and Hezbollah continues to hold sway over the Lebanese political landscape.

Further, the Houthis, no matter how heavily Saudi Arabia is bombing Yemen, are close to winning the strategic city of Marib, one of the most important Saudi strongholds in the country. Hamas still holds Gaza – last spring Israel, for the first time in its history, saw its Arab citizens siding with the Palestinians protesting in the street of Jerusalem, leaving the chilling sensation of a possible civil war inside the country.

If the principals behind Soleimani’s killing bet on Iran’s self-deterrence, they miscalculated, as the bombing of the US al-Asad base in Iraq has proven – a far more damaging and accurate attack than it was initially considered.

In addition, US and Israeli naval warfare against Tehran, intended to stop oil supplies to Syria, has now ceased after Iran’s reprisals; joining the Abraham Accords has not prevented delegations from Riyadh and Abu Dhabi from going to Tehran – these Gulf states both know how vital a non-aggression pact with their neighbour is. They also know that Israel cannot fill the vacuum left by the US partial withdrawal from the region, and they are increasingly at odds with Washington over the depth of the US security commitment.

And, finally, a new Iranian leadership is changing the country’s attitude to nuclear negotiation, as it casually disregards any western pressure against it.

Put it all together and it is difficult to argue that Iran is more deterred than it was before Soleimani’s killing.

His authority was undisputed

Soleimani represented a reliable interlocutor to call to de-escalate moments of crisis. He was the equivalent of the famous telephone number in Europe that Henry Kissinger searched for in the 1970s.

In a region that is so volatile, secure and confidential communication channels should be maintained. The IRGC’s commander was a master of the region’s highly complex and over nuanced dynamics. When it was necessary, he kept his turbulent proxies under control. Finding a worthy successor has been difficult for Iran, as the latest developments in Iraq have shown.

His authority was undisputed, as was his ability to present effectively and quickly any case to his top decision-makers in Tehran. The void he left has not been filled.

Any serious professional involved in the shadowy world of intelligence and asymmetric warfare in the Middle East will tell you that a person as important as Soleimani should not have been eliminated. His intrinsic value in maintaining a modicum of stability, and in avoiding dangerous miscalculations and escalations, outweighed any benefits that could arise from his death.

Only neophytes like Trump, or Israelis who had a short-term interest in conflict generation like Netanyahu, could go that far; and, if the intent was to push Iran back, they have failed abysmally.

The man who is talked about as Soleimani’s protege, Hossein Amir-Abdollahian, is the new foreign minister of Iran, in the more hawkish Ebrahim Raisi administration.

In the words of US Centcom Commander General Kenneth McKenzie: “Iran’s missiles have become a more immediate threat than its nuclear programme… they hit pretty much where they wanted to hit… can strike effectively across the breadth and depth of the Middle East.” McKenzie chillingly added that Iran had achieved an “overmatch″ capability, that is it can fire more missiles than its adversaries can shoot down or destroy, making it extremely difficult to check or defeat.

The room for a compromise on both sides to save the JCPOA is narrowing to months if not weeks, and the new Iranian leadership does not appear particularly concerned about such a perspective.

No matter how many times the Israelis “mow the grass“ of the Iranian nuclear programme with sabotage and the killing of Iranian scientists, the research and development Iran has gained over the past two years cannot be reversed.

Former top Israeli Air Force commander, General Isaac Ben-Israel, recently said that up to 10 years ago Israel could probably have hit effectively the Iranian nuclear facilities, but added: “Today, all the technology needed to produce a bomb is already in Iranian hands. The only question is whether Iran will decide to go ahead or not. And that’s just a matter of time.”

It must have been very tempting to kill Qassem Soleimani, but sometimes, especially in the Middle East, the more tempting option is not necessarily the best one.