HOME / WORLD / The New Geopolitical Role Of The UAE 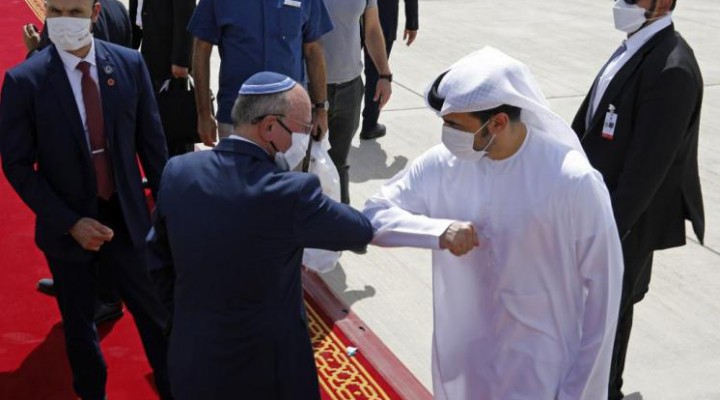 The United Arab Emirates has unexpectedly found itself the focus of global attention after signing an agreement with Israel on 13 August that covers a full normalisation of relations. The talks were mediated by the US. The UAE has therefore become the third Arab state to recognise Israel (after Egypt in 1979 and Jordan in 1994, both under pressure from the US).

It should be noted that the UAE is portraying its decision to move closer to Israel as a way of preventing the annexation of Palestinian territories. In June, the UAE’s ambassador to the US, Yousef Al Otaiba, published an article warning the Israeli government against such actions and praising the Emirates’ role in the Middle East peace process.

The move has been welcomed by the US, which has called it a major diplomatic victory. James Carafano, from the right-wing conservative think tank The Heritage Foundation, noted that the historical peace agreement between Israel and the UAE shows that Donald Trump’s Middle East policy is succeeding. It is just the first step towards creating a Middle East Strategic Alliance, an idea thought up by the Trump administration as a way of bringing Israel and Arab nations together in a collective project that will ensure stability and prosperity in the region. The US will play a unifying role in the alliance and provide assistance to each of its members. Among the goals of this promising alliance are the promotion of economic integration, the prevention of regional conflicts and humanitarian crises, the combating of international Islamist terrorism, and the containment of Iran.

The US and Israel’s plans include establishing a monopoly on arms sales to the Middle East by preventing competition from Russia and China. The UAE is to be a testing ground, since it is a key partner for both countries in the procurement of modern weapons. The sale of American F-35 multirole fighter jets to the UAE is currently under discussion. Israel has given its approval to the deal, while US Secretary of State Mike Pompeo has emphasised that the UAE will use the jets to defend itself against threats from Iran. Weapons will not be the only link between the countries. Israel will now be given free access to Arab oil, which it needs to support its manufacturing industry. Israel will also be able to use the Emirates as a proxy country to make deals with other Arab and Muslim countries, including those that do not recognise Israel.

It goes without saying that the leaders of a number of Arab and Muslim countries, as well as their media outlets, have already expressed concern over the agreement. It has also been suggested that the deal with Israel will directly affect the Palestinian issue, or rather will reduce the level of support being given to Palestinians by the Arab world.

Meanwhile, Palestinian leaders have rejected the agreement, since it recognises Jerusalem as the capital of Israel.

Turkey has also reacted negatively to the deal and promised to increase its aid to Palestine.

The difference of opinion is being seen as another reason for the deepening crisis within the Organisation of Islamic Cooperation that could lead to its dissolution.

Obviously, the preconditions for the establishment of diplomatic relations were laid earlier on. Many believe it was following the 2010 murder of Hamas leader Mahmoud al-Mabhouh, who was responsible for weapons procurement and logistics, at a fashionable hotel in Abu Dhabi. He was drugged, electrocuted, then suffocated. Mossad is widely regarded as having carried out the killing.

From then on, relations between the two countries began to strengthen. It has also been noted that Israel is helping the Emirates implement domestic security measures using cutting-edge technology.

Needless to say, the US has not been standing by doing nothing during all this. In fact, the UAE has started to actively involve US specialists in its projects. In 2017, it was revealed that the Emirates was actively recruiting former CIA agents to help establish a new intelligence service. It was pointed out by Foreign Policy magazine that the Emirates was creating its own spy empire in the Persian Gulf.

It is likely that achievements have been made in this area and the UAE is now pursuing a more independent policy.

As the German Institute for International and Security Affairs points out, “it is becoming increasingly clear that the Emirates have ceased to be a secondary player in the Middle East, unable to compete with regional heavy­weights Egypt, Turkey and Iran. Rather, the country is now exerting influence far beyond its own borders. Most recently, it demonstrated by its partial withdrawal from Yemen in 2019 that it is capable of pursuing an independent course vis-à-vis Saudi Arabia as well.” The institute believes that the Emirates is no longer a junior partner of Saudi Arabia and is currently pursuing a new regional policy with three clear priorities:

– Fighting the Muslim Brotherhood in the region because it poses a threat to the country’s leadership. It is for this reason that the UAE is working closely with Egypt and supporting General Haftar in Libya. This is also the reason why relations with Turkey are deteriorating, since the latter relies on the structures of the Muslim Brotherhood in its regional policy. The UAE’s decision to send military aircraft to the Mediterranean region to help France and Greece is also linked to this strategy. The Emirates supports the isolation of Qatar, too, which is the most important supporter of the Muslim Brotherhood.

– Opposing Iranian expansion in the Middle East. This is not happening as openly as with the Muslim Brotherhood, but it is a long-term trend, especially considering that the Emirates has territorial claims against Iran. Three islands – Abu Musa and the Greater Tunb and Lesser Tunb – are under the control of Iran, but they are also claimed by the UAE.

– Controlling the sea routes from the Gulf of Aden to the Red Sea. To this end, bases have been established in Eritrea (Assab) and Somaliland (Berbera), and the UAE took control of sea ports in Yemen while fighting Houthi rebels. The Emirati company DP World has been expanding and managing the ports in the region. The Emirates is also a major logistics hub through which air passengers can travel to many countries around the world. The sea routes are likely to be of military and economic importance.

Despite the UAE’s increasing independence, Riyadh and Abu Dhabi remain partners and even carry out joint regional projects. Since the start of the military operation in Yemen, for example, both countries have been supporting Sudan financially by paying the country for militiamen to take part in the fighting.

And, in late 2019, UAE Minister of State for Foreign Affairs and International Cooperation Anwar Gargash announced that the next twelve months will be “decisive” in many areas, noting at the same time that progress had already been made on a number of issues in the region.

It seems that the agreement with Israel is the culmination of the Emirates’ efforts to transform its domestic and foreign policies. It is also clear that not all countries in the region are happy with the UAE’s new role, which could lead to political tensions and a variety of conflicts.

2 thoughts on “The New Geopolitical Role Of The UAE”