HOME / WORLD / Is There A Coup Brewing In The US? 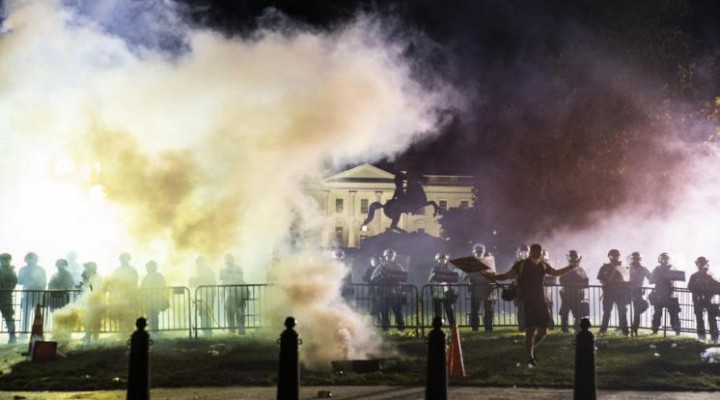 In August, a curious document emerged in the US entitled “Preventing a Disrupted Presidential Election and Transition“. It was prepared by a group called the Transition Integrity Project, which includes more than one hundred current and former senior US officials alongside experts from various fields. The group announced that they had run crisis scenario exercises for the November 2020 elections, all of which had shown rather disappointing results.

It should be noted that the group, which was put together in December 2019, includes not only Democrats but also Republicans who speak out against Donald Trump. It has been reported that the Transition Integrity Project has the direct support of George Soros, who is trying to organise a colour revolution in the US.

Among other things, a link has been uncovered between the group’s founder, Rosa Brooks, and Soros himself, as well as Hillary Clinton’s campaign leader, John Podesta, and former National Security Advisor Jake Sullivan, who works for Joe Biden.

Rosa Brooks is a fellow at the New America Foundation, which was sponsored by the Open Society Foundations, and she used to work as a senior national security advisor in the US State Department during the presidencies of both Clinton and Obama. She is currently pursuing an academic career at West Point’s Modern War Institute. For some reason, Rosa Brooks believes that the forthcoming elections will lead to violence and a constitutional crisis.

The group’s second founder is Nils Gilman, who is vice president of programs at the Berggruen Institute (San Francisco) and also works at the Rockefeller Foundation. The institute is a research centre that promotes ideas of transhumanism, that is, it is opposed to traditional values.

The group’s director is Zoe Hudson – a former senior policy analyst at Soros’ Open Society Foundations who was responsible for maintaining contacts between the organisation and US government departments for more than ten years.

The 22-page document states that “November’s elections will be marked by a chaotic legal and political landscape. We also assess that the [sic] President Trump is likely to contest the result by both legal and extra-legal means, in an attempt to hold onto power.” The recent protests, which federal agents were deployed to suppress, are also regarded as evidence that Trump may go to extreme measures to stay in office.

Here are the key conclusions that the authors themselves highlight in the report:

– The concept of “election night” is no longer accurate and has become dangerous. “We face a period of contestation stretching from the first day a ballot is cast in mid-September until January 20,” note the report’s authors. “The winner may not, and we assess likely will not, be known on ‘election night’ as officials count mail-in ballots. This period of uncertainty provides opportunities for an unscrupulous candidate to cast doubt on the legitimacy of the process and to set up an unprecedented assault on the outcome. Campaigns, parties, the press and the public must be educated to adjust expectations starting immediately.”

– A determined campaign will be able to contest the elections into January 2021. The report states: “We anticipate lawsuits, divergent media narratives, attempts to stop the counting of ballots, and protests drawing people from both sides. President Trump, the incumbent, will very likely use the executive branch to aid his campaign strategy, including through the Department of Justice. We assess that there is a chance the president will attempt to convince legislatures and/or governors to take actions – including illegal actions – to defy the popular vote. Federal laws provide little guidance for how Congress should resolve irregularities when they convene in a Joint Session on January 6, 2021. Of particular concern is how the military would respond in the context of uncertain election results. Here recent evidence offers some reassurance, but it is inconclusive.”

– The administrative transition process itself may be seriously impeded. According to the report’s authors: “Participants in our exercises of all backgrounds and ideologies believed that Trump would prioritize personal gain and self-protection over ensuring an orderly administrative handoff to his successor. Trump may use pardons to thwart future criminal prosecution, arrange business deals with foreign governments that benefit him financially, attempt to bribe and silence associates, declassify sensitive documents, and attempt to divert federal funds to his own businesses.”

– Plan for a contested election. “If there is a crisis, events will unfold quickly, and sleep-deprived leaders will be asked to make consequential decisions quickly,” the report states. “Thinking through options now will help to ensure better decisions. Approach this as a political battle, not just a legal battle. In the event of electoral contestation, sustained political mobilization will likely be crucial for ensuring transition integrity. Dedicated staff and resources need to be in place at least through the end of January.”

– Focus on preparedness in the US, providing political support for a full and accurate count. The report’s authors state: “Governors, Secretaries of State, Attorneys General and Legislatures can communicate and reinforce laws and norms and be ready to confront irregularities. Election officials will need political and public support to see the process through to completion.”

– Tackle the two greatest threats head on: lies about “voter fraud” and the escalation of violence. “Voting fraud is virtually non-existent,” states the report, “but Trump lies about it to create a narrative designed to politically mobilize his base and to create the basis for contesting the results should he lose. The potential for violent conflict is high, particularly since Trump encourages his supporters to take up arms.”

– Foresee a difficult administrative transition. According to the report: “Transition teams will likely need to do two things simultaneously: defend against Trump’s reckless actions on his way out of office; and find creative solutions to ensure landing teams are able to access the information and resources they need to begin to prepare for governing.”

Many liberal media outlets have supported the Transition Integrity Project’s statements and published a number of interviews on the “war games” carried out by the group. Leading television channels in the US are also supporting the group’s image and giving airtime to its position. For example, Al Gore openly stated live on Fox News that if Trump does not leave the White House in January 2021, then the military will remove him.

In fact, one of the exercise scenarios run by the group was a clear Trump win. So, on what basis would US citizens be showing their defiance and organising riots?

Despite such contradictions, and the fact that there is no mention of the US Constitution’s provision on presidential elections, which clearly shows the mechanism for recognising the victor, it is obvious from the report itself and the subsequent reaction that public opinion is being programmed in the US and includes several elements: the inevitably of civil conflicts throughout the country; Donald Trump’s direct responsibility; the need for mass mobilisation; and a military intervention in favour of Trump’s opponent, that is, the representative of the US Democratic Party.

At the very least, these actions are already devaluing the practice of electoral democracy that, until now, has been regarded as the foundation of Western “rule of law” societies.

0 thoughts on “Is There A Coup Brewing In The US?”