HOME / WORLD / America: Land of the Free… and Conspiracy Nuts 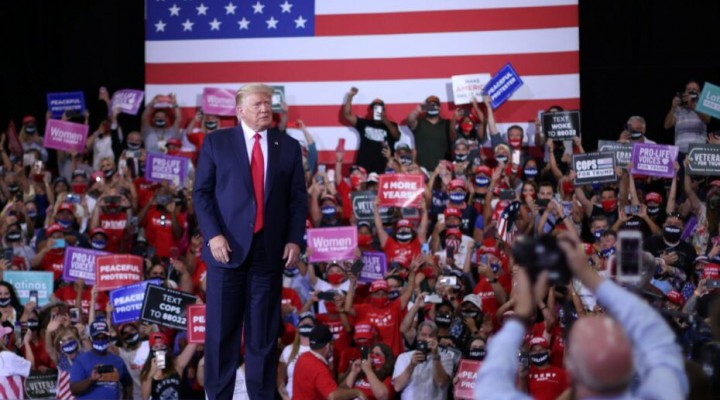 U.S. hit a dangerous threshold when a senior official is warning citizens to arm themselves because “leftwing hit squads” are to seek retribution.

The United States has hit a dangerous threshold when a senior member of the Trump administration is warning citizens to arm themselves because “leftwing hit squads” are about to seek retribution.

“If you carry guns, buy ammunition, ladies and gentlemen, because it’s going to be hard to get,” urged Michael Caputo, a Trump-appointed spokesman on public health affairs. He made the remarks reportedly in a social media forum, claiming that his life was in danger from political assassination.

“And when Donald Trump refuses to stand down at the inauguration, the shooting will begin,” added Caputo. He also claimed that government health experts at the Center for Disease Control and Prevention were trying to undermine Trump by exaggerating the impact of the coronavirus pandemic. And that from a supposed spokesman for the health department!

These kind of rantings have gained prominence among Trump’s family, aides and supporters, primarily the followers of the QAnon network which peddles a vast array of other outlandish conspiracy theories, such as Trump being the nemesis of pedophile trafficking by an elite cabal.

The central idea being promoted is that the forthcoming presidential election will be a stitch-up against Trump orchestrated by powerful political opponents embedded with the “deep state”. Trump associates like the convicted political lobbyist Roger Stone are reportedly exhorting that he should refuse to recognize any electoral defeat to Democrat rival Joe Biden and thence to declare martial law.

The White House incumbent has led the way in fomenting an atmosphere of paranoia and distrust. Trump has repeatedly warned of electoral fraud being perpetrated through mail-in voting and has sought to delegitimize the election as possibly the “most corrupt ever”.

A nightmare scenario is that if Trump is defeated fair and square in the November 3 ballot, then he and his followers have created enough paranoid treachery so that the fraught outcome could precipitate civil war-like chaos.

Whenever senior Trump administration officials are earnestly claiming in public that leftwing hit squads are gunning for opponents then that is an alarming sign of an unprecedented and pernicious threshold having been reached.

Caputo and other Trump boosters have been referring to the self-declared “Antifa” member who last month shot dead a pro-Trump supporter in Portland. The anti-fascist gunman was days later reportedly shot dead by law enforcement officers who tracked him down.

There are armed groups on both left and right, although predominantly they are on the right, espousing white supremacist politics. Trump has openly flirted with such groups, praising them as patriots, even though rightwing extremists are reckoned to have carried out much more violence than supposed leftwing radicals.

A nebulous and unconvincing theory is that “deep state” forces are mobilizing Antifa as some kind of internal color revolution against Trump. A variant of this idea is that the Democrat party in connivance with the deep state have been orchestrating civic strife over the past months through Antifa and Black Lives Matter protests.

In denial are the glaring facts that widespread protests across the United States in recent months have been engendered organically by routine police killings of black citizens. These protests have been multiracial and documented as largely peaceful. When demonstrations have turned violent it is often due to heavy-handed militarized police tactics. The idea that mass protests and violence have been pushed by Democrats and the deep state in conjunction with multibillionaires like George Soros, Antifa and Black Lives Matter is simply a ludicrous denial of the endemic and chronic social problems facing America stemming from its dysfunctional oligarchic system.

Layered on top of this paranoia are other irrational ideas like the deep state training leftwing death squads for the eventual electoral “coup”.

Or the latest nonsense about Antifa “operatives” acting as arsonists to unleash the wildfires that are engulfing the West Coast states of California, Oregon and Washington.

Federal and state law enforcement officers have dimissed rumors of Antifa activists starting the fires which have destroyed record numbers of towns and land area all along the entire Pacific coast. False social media claims of political arsonists posted by QAnon and other Trump supporters have compounded the immense challenge to firefighting and other emergency services in containing the disaster. There are reports of journalists being warned away at gunpoint by residents accusing them of being “Antifa arsonists”.

It is a hallmark of the rampant delusional thinking when an ecological crisis, like social crises over police brutality, racism and poverty, are labelled as the subversive work of deep state-sponsored radicals trying to overthrow the Trump administration.

Now, is there such a thing as “deep state” in the US? Yes, indeed, there is. Is there an unelected political opposition to Trump which has tried to thwart his presidency by peddling false conspiracy claims about “Russian interference? Again, yes. These are valid conspiracy theories, much like ones which contend that the murder of former President John F Kennedy or the terror attacks on 9/11 had a deep state hand in them.

The “Land of the Free and Brave” is now overrun with conspiracy paranoia which has lost all mooring in intelligence or objective conditions. When administration officials are seriously warning followers about assassination plots, then a nation has reached a combustible danger point.

The United States & Its Constitution Have Two Months Left

0 thoughts on “America: Land of the Free… and Conspiracy Nuts”