HOME / Politics / And Then What? – We Daren’t Not Look Into the Abyss 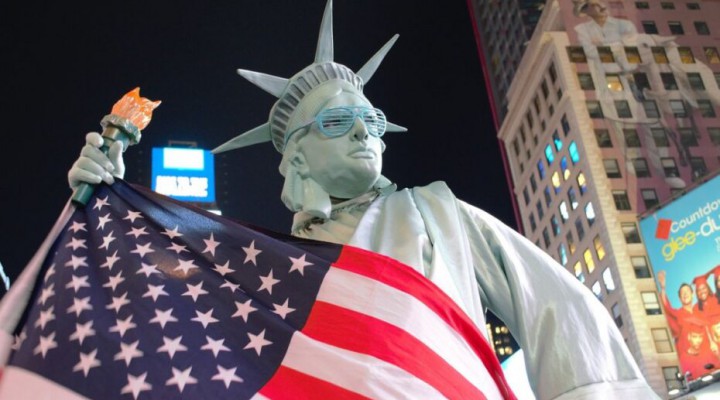 The election is configured as a ‘crusade’ against cosmic evil – a devil, or demiurge. The two sides seem to mirror each other in these passions.

Secular Millenarianism – the belief that some transformative catharsis in history has the power to expunge the crimes and follies of the past – has a long and bloody history. The notion originally owes to religion. Theories of human ‘Progress’ as an upward-trending, linear continuum, inevitably leading to ‘a better human end’, though clothed today as technological ‘miracles’, were never empirical hypotheses. They were always concocted myths, answering to a human need for meaning, yet manipulated ruthlessly in the interests of power.

But what are such myths doing in a modern U.S. Presidential election? Quite odd. Suddenly, American politics now (by and large), eschews detailed policies, and defines itself, rather, as a Manichean struggle between the forces of light and of darkness; of freedom versus despotism; of justice versus oppression and cruelty.

The election is no longer ‘politics’, but is configured more as a ‘crusade’ against cosmic evil – a devil, or demiurge. Stranger still, the two sides seem to mirror each other in these intense passions.

“In article after article, liberal intellectuals and activists have been talking for months about how Trump could steal the election or refuse to leave the White House even if he loses. But if the Right dares to point out that Democrats are actually changing the rules of the electoral process and actually speaking publicly about refusing to concede even if they lose, well, this only proves that the Right is going to steal the election and refuse to concede if they lose!” (from an article, Stop the Coup!)

What is going on?

What seems almost certain is that the election will be irretrievably contested either by one, or both major parties. A major constitutional crisis lies ahead, and then what? This is the abyss into which we daren’t not look.

A part of ‘Blue’ Millenarianism does reflect something substantive: a shift in how Americans (and many Europeans) conceive the world. But in another way, this Manicheanism is cynical political manipulation: laying the groundwork for the narrative that Trump will lose. He will lose in the popular vote (even if he gains a majority in the Electoral College), and will then refuse to leave office – in flagrant disregard for the (so-called) public ‘verdict’. The U.S. constitution, however, is plain. The candidate who wins 270 votes in the Electoral College is President.

The Democrats’ and ‘never-Trumper’ Republicans have released a 22-page report, The Transition Integrity Project, an exercise in war-gaming a contested election. The outcome of each TIP scenario results in mass mobilisation and political impasse, which the authors argue can and should lead to the removal of Trump.

The point here is that the TIP blueprint, is perversely portrayed as no coup. On the contrary, it is fore-staged as a heroic effort to save the country – to save Democracy from Despotism. Cynical it may be, but that does not make it any less effective.

Anne Applebaum’s new book, Twilight of Democracy, offers some important pointers about the roots to this Manichean ‘dark versus light’ narrative. She is a prominent U.S. journalist and the wife of Radek Sikorski, a senior Polish politician. Ron Dreher summarises thus: “She begins her book by talking about a New Year’s Eve party at their Polish country home at the turn of the millennium. Poland had been free from communism for about a decade. Everyone was giddy. But now, half the people at the party – aren’t talking to the other half”.

In Applebaum’s view, that key anti-communist consensus has been fractured into classically liberal internationalists like her — pro-globalism, pro-liberal social values, pro-immigration — and, on the other side of the schism, nationalist populists, like supporters of Poland’s Law & Justice Party, Hungary’s Fidesz – and Donald Trump. That is to say: the middle ground is empty, and has migrated either to wokeness, or to the new-Right.

Her conclusion is that the U.S. is not heading into a left-wing, soft-totalitarianism (wokeness), but rather into right-wing authoritarianism. (Authoritarianism here, is defined as a strong national leader, exercising something approaching a monopoly of power, whereas totalitarianism is not just authoritarianism, but extends to require an ideological ‘hold’ in which ‘all’ are required to ‘live’ the ideology – in every facet of their thinking, and in daily conduct.)

Here we get to the root of it: Applebaum presents a world where everything has become inverted: Conservativism is no longer conservative. And Radicals are no longer radical, but rather seek ‘to conserve’ what exists. She writes: “The new Right does not want to conserve or to preserve what exists at all … It has broken with the old-fashioned, Burkean small-c conservatism that is suspicious of rapid change in all its forms. Although they hate the phrase, the new right is more Bolshevik than Burkean: these are men and women who want to overthrow, bypass, or undermine existing institutions, to destroy what exists”.

Trump thus becomes the dangerous radical revolutionary wanting to pull down everything ‘good’, which Applebaum defines as secular, liberal, capitalist, and globalist. People on the ‘new Right’, she says, think of the institutions that exist (the American-shaped global order), as a threat to their particular traditions and sovereignty – and therefore are intent to disrupt both those institutions, and the global order, per se. Thus taking America to the type of despotism that used to characterise East European regimes.

Ivan Krastev has written that Applebaum’s “much-praised history books about the Soviet Gulag and the establishment of the communist regimes in Central Europe were her historical introduction to ‘The Inevitability of 1989’. For her, the end of the Cold War was not a geopolitical story: It was a moral story, a verdict pronounced by History herself. She tends to see the post-Cold War world as an epic struggle between democracy and authoritarianism, between freedom and oppression”.

“It was Marx who believed that communism was inevitable because History – a force with godlike powers of determination – required it. Well, the Democrats’ Millenarianism now precisely lies with the shared belief that humanity is on a “Grand March” upward toward ‘Progress’. It goes on and on, obstacles notwithstanding, for obstacles there must be, if the March is to be the Grand March”.

And if progress is ‘inevitable’, and the Democratic Party is leading society’s Grand March to conserve the future, as it were, the ‘March’ becomes a struggle precisely against those reactionary forces standing against the future – and History, too. As for those who oppose or disrupt The March: “How necessary—indeed, how noble—it is of the Party to bulldoze these stumbling blocks on the Grand March, and make straight and smooth the road to tomorrow”.

The mirror-image to Applebaum’s account is that many American conservatives exactly do see an increasingly illiberal Left – and she has this correct – as antagonist to those early U.S. traditions and ethos that they believe made America once great – and which they would wish to see restored again.

Pro-Trumpers however, see the plan to forcibly remove President Trump clearly (even were he to win a majority in the College). The TIP is explicit: “We assess with a high degree of likelihood that November’s elections will be marked by a chaotic legal and political landscape. We also assess that President Trump is likely to contest the result by both legal and extra-legal means, in an attempt to hold onto power”.

The TIP scenarios, Professor Mike Vlahos foresees, inevitably will be portrayed as that of ‘saving democracy’ – from Trump – and from the ‘aberration’ of an Electoral College that could award Trump the Presidency, even as he loses the popular vote (an outcome that occurred in 2016, too). Vlahos thus foresees the possibility of the Electoral College (and even the Constitution itself) being cast as ‘the enemy’, standing in the way of democracy – the latter to be saved to great public acclaim, through the removal of an ‘illegitimate’ President.

The purpose behind the Manicheanist dualism therefore, becomes clear: The U.S. election is to be imagined as the epic struggle between the forces of democracy and despotism. It is in this sense that Applebaum is a classic ‘1989er’, Krastev writes: She was shaped by the Cold War without ever really experiencing it: “For the ’89ers, the Cold War was what the anti-fascist resistance was for the West’s student revolutionaries of the 1960s, the ’68ers – a time of inspiring heroism and moral clarity. It was precisely this mindset that made many ’89ers first to detect the danger coming from Vladimir Putin’s Russia, but also Poland’s Law & Justice Party, Hungary’s Fidesz – and Donald Trump”.

What is going on here is, of course, classic ‘colour revolution’ management of mass psychology – albeit perpetrated from within the U.S., against its own incumbent President. What the TIP represents is the laying down of the narrative mosaic: It proposes nothing abrupt. The Electoral College simply is incrementally ‘moved along’ from the ‘in need of reform’ category, to the ‘obstacle to democracy’ that “should be dumped” category (see here, for example).

TIP is all about massaging public perceptions about Trump’s likely election mis-behaviour, Vlahos relates (as a historian, and former War College professor), so as to slide the notion of the need to remove him under a soothing mantle of legality and acceptability.

The project also permits people a period of time to put behind them the shock of what is about to unfold: providing them with time and space to embrace this ‘new world’ – and, for them to come to see that the world they were inhabiting has become unbearable and unacceptable. (i.e. Classic myth-making instrumentalised for political ends.)

All this is being orchestrated so that people will be able to move smoothly through and be prepared for the violence and turmoil – of that which is to come.

And what is to come? Massive demonstrations (in the millions, that are already being prepared) to give the impression that all of America is against the President, thus posing the question to the U.S. military: ‘On whose side, are you: Democracy or Despotism?’ The TIP outlines clearly: “A show of numbers in the streets – and actions in the streets – may be decisive factors in determining what the public perceives as a just and legitimate outcome”. Or, in other words, events will conspire to suggest to people and to the military command, the only ‘correct’ answer.

Will it work? It just might. Only a clear win in the popular vote might be a spanner in the works, but that seems a stretch. Will the senior military balk? Debateable.

Why the US is Doomed

0 thoughts on “And Then What? – We Daren’t Not Look Into the Abyss”