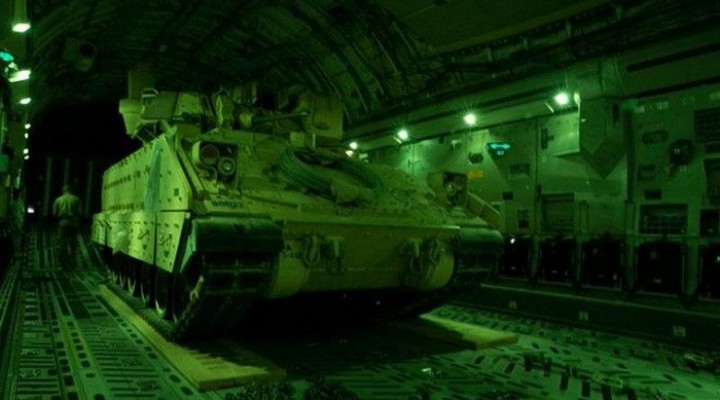 Can there ever be a secular or even Bolshevik state encompassing much of the Middle East? Who is doing it? Is it the real NATO or the new US and Israeli dominated version, the ‘Arab NATO’ that Secretary Pompeo talks about?

What is happening is the formation of a new nation inside Syria and Iraq, one based not on Wahhabist beliefs as its first incarnation, the ISIS caliphate, but rather Kurdish socialism, long pointed out by Erdogan as a terrorist threat.

Few are aware of the shared roots of the Israeli state and key Kurdish separatist movements.

During Israel’s earliest days, the hardcore Bolsheviks among the Irgun and Stern Gang held sway over the multi-generational ‘embeds’ among not just Arab communities throughout the region but among the Kurds as well.

Kurds have always been politically drawn to Israel, the socialist state that has managed to gain incredible support from the United States while still maintaining extremely cordial relations with the Soviet Union and Russian Federation.

At heart, the Israeli Bolsheviks of the early days and their inheritors, the Likudists under Netanyahu, have worked hand in hand with the PKK inside Turkey, there recognized as a terrorist organization, and inside Iraq as well.

In Iraq, the PKK was the opponent of Saddam, where a tacit agreement was in place allowing the Turkish Army to enter Iraq at any time to destroy Kurdish-PKK capabilities.

That agreement continued under US occupation of Iraq and, to a lesser extent, to this day.

However, Turkey’s capability to operate against what they see as the Kurdish domestic threat is coming to an end.

Erdogan’s huge error here was to believe that Israel and Saudi Arabia would be reliable allies against Syria and Iraq.

Erdogan should remember the 2016 coup attempt, something he seems never to have gained a full understanding of.

The US, aided by Israel and Saudi Arabia, with funding from the UAE and Bahrain, is establishing a new Arab/Kurdish state along the entirety of the Turkish-Syrian-Iraqi border.

Driving this state economically is the ‘breadbasket’ of Syria along with Syria’s entire water supply and the vast untapped oil resources of Deir Ezzor province.

Across the border, in Iraq and its semi-independent Kurdish region, the new state will spread south to the Saudi border and extent eastward, not just to Iran but east and south into the Kirkuk oil fields as well.

Since 2017, the US has been building bases across Eastern Syria and now maintains a force of about 12,000, with half contractors and a few hundred Saudi and Israeli ‘nation builders.’

Replacing the old ISIS (banned in Russia) infrastructure, Saudi Arabia is acquiring oil trucks to replace those the Russian Aerospace Forces destroyed, with the first 30 arriving a week ago, delivering the first truckloads of oil to Turkey and returning for more.

The defeat of ISIS, 90% the result of the Syrian Arab Army, Shiite militias in Iraq, Hezbollah and Russian Aerospace Forces, was a major setback for those who would keep the Middle East divided and enslaved.

ISIS was a ‘perfect storm’ of religious ‘phooery’ and cheap street theatre.

Famed CIA ‘fall guy,’ al Qaeda (banned in Russia) was and is much the same, false flag terrorism on demand, with fake terrorist threats delivered ‘on demand’ to any region that is deemed to require military intervention to preserve needed political control.

The West was able to protect ISIS through a ‘rope-a-dope’ bombing campaign while, in actuality, fully supporting ISIS, initially at least, then saving its leadership to be redeployed under a new guise wherever needed.

That new guise is here, wrapped in ‘socialism.’

How it is Being Done

The US began earlier this year by assassinating Arab tribal leaders and their entire families throughout Northern Syria and Deir Ezzor province. Then, one by one, regional sects, both Christian and Muslim, were approached with a ‘Hobbs End’ choice, either ‘join with the Devil’ or see your entire people executed and thrown into mass graves.

Do remember, the people of that region watched thousands of oil trucks empty the oil fields of not just Syria but the Kirkuk field of Iraq, for years. These trucks moved openly, under US air cover, for years, with daily convoys many miles long heading right through the city of Erbil, then to Mosul and from there, through Turkish occupied Iraq.

Those living under occupation inside Syria today have experienced years of duplicity by the US and its “coalition” allies, open support of terrorists which has included not just logistical support but direct military intervention, time and time again, to protect terrorist forces.

Until Russian Aerospace Forces obliterated this obscenity, the oil convoys of ‘ISIS’ were the single largest manmade feature seen on Earth from space, up to 12,000 trucks at a time moving 4 abreast.

What is also seen is the US military presence behind the new ISIS-like oil thievery. When the US announced it was bringing a shipload of Bradley Fighting Vehicles to escort oil trucks into Turkey, the message became clear.

The unique threat to the region comes from various directions. First of all, it should be accepted that the ‘social adhesion’ used to create this new society is gangsterism, bribery, threats of violence and fomenting a feeling of hopelessness among the subject populations of the region.

To accomplish this, the US, Israel and Saudi Arabia have employed the same basic tools that made Britain the colonial power it became during the 18th century, they play ‘The Great Game,’ and they do it well.

Mix in the Mumbo Jumbo

It seems every player in the region has pulled out their superstition card. For Israel, we have both the imaginary “biblical Israel,” that covered from the Nile to the Euphrates with its temples, Jerusalem, Aleppo, Palmyra, Baalbek and others, “yet to be announced.”

In order to put this plan in motion, Israel has alternatively partnered with the UAE and Bahrain, with Turkey and the Muslim Brotherhood and has convinced, we are told, the Saudi royal family that they are secretly Jews.

Similarly, Israel has convinced millions of American Christian Evangelists that until Israel controls the entire Middle East and the temples are built, there will be no Armageddon and ‘rapture.’

So, to millions of Americans, among them the majority of Trump’s supporters, until Israel crushes Islam and unites those of the Middle East allowed to survive, the world can’t be destroyed allowing select Christians to bodily rise into heaven, based on heretical mistranslations of pari-Christian doctrine.

Thus, if American military are, as accused, burning wheat fields in Syria or cutting off water to villages, if these actions were eventually to bring about the “end of the world,” they would be following Pentagon doctrine as interpreted by many.

One of the Pentagon’s top leaders has been General Jerry Boykin. His take on what we are describing is outlined here from a 2013 Mother Jones article:

“Lt. Gen. Jerry Boykin, a top executive at the influential Family Research Council, has joined the chorus of religious conservatives touting the Syrian conflict as a prelude to Armageddon. On Wednesday, Boykin appeared on Prophetic Perspectives on Current Events, a talk show hosted by dominionist preacher Rick Joyner (see the video above). The pair discussed a passage in Isaiah 17, which predicts Damascus will be reduced to ‘a ruinous heap.’

‘One of the scriptures that has never been fulfilled and has to be fulfilled before this age can end is that Damascus will be destroyed, never inhabited again,’ Joyner explained. ‘What in the world could cause a city to be destroyed and never inhabited again?’ Boykin didn’t hesitate. ‘One of the ways Damascus could be destroyed, never to be re-occupied, would be through a chemical attack,’ he replied. ‘So let’s just take a scenario: The Free Syrian Army takes Damascus and Bashar al-Assad is in a desperate mode now….What would be his final act? Well it may very well be to unload all his chemical weapons on the population center there in Damascus. Destroy the city and destroy it in a way that he just kills maybe millions of people. But the byproduct is that he has residue there that could make Damascus uninhabitable and for a very long time.’

This is not the first time Boykin has embraced the notion that war would obliterate the Syrian capital, paving the way for Jesus’s return. He recently wrote an endorsement for Damascus Countdown, a fictionalized account of the looming biblical conflict by best-selling author Joel Rosenberg. And he has spoken at several of Rosenberg’s annual Epicenter Conferences, which plumb the Middle East’s role in biblical prophesy.”

Bringing about General Boykin’s world as he sees it, views shared by many of the Pentagon’s top officers, will require, for awhile at least, a Kurdish nation state as an Israeli puppet or a Saudi puppet or an American puppet.

In truth, no one knows who is pulling the strings, or if Israel or Saudi Arabia or the United States still exist as nation state entities, though every sign indicates that government functions in each are non-existent.