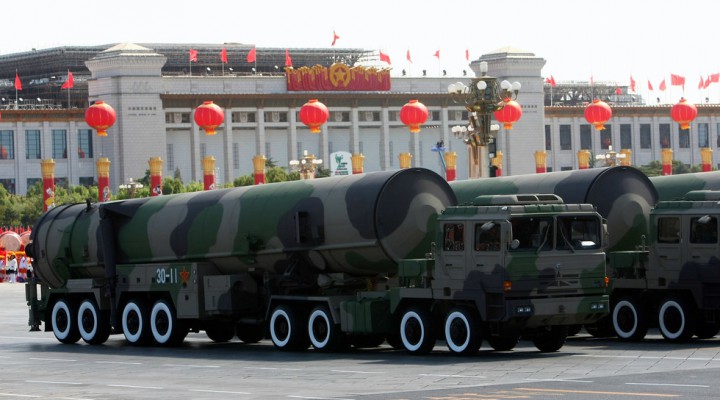 As the US threatens to withdraw from the New START treaty over Chinese non-participation, domestic pressure from inside China builds for a larger strategic nuclear arsenal. Could this be a good thing?

In an op-ed published in Chinese newspaper Global Times, its editor-in-chief Hu Xijin, argued that China should seek to upgrade its strategic nuclear arsenal from its current level of about 200 antiquated weapons to a modernized force comprising more than 1,000 nuclear weapons, including more than 100 modern mobile DF-41 intercontinental ballistic missiles (ICBMs), each armed with 10-12 nuclear warheads, capable of striking the US mainland.

The deployment of DF-41 missiles, when combined with China’s new JL-3 submarine-launched ballistic missiles and nuclear-armed H-20 strategic bombers, would give China a capable nuclear TRIAD that rivaled those of the US and Russia.

While Hu Xijin’s op-ed received considerable support on Chinese social media, there was some pushback. Zhao Tong, a senior fellow in nuclear policy at the Carnegie-Tsinghua Center for Global Policy, based in Beijing, has argued that even in a climate of deteriorating Sino-American relations, any effort on the part of China to build a viable strategic nuclear arsenal on par with that of the US was counterproductive and dangerous.

This point of view has a logic of de-escalation that is inherently attractive, but when viewed in the larger context of global nuclear posture where the US and Russian nuclear disarmament is held hostage by the current non-participation of China in meaningful disarmament talks, any call for China to maintain the nuclear status quo is in itself destabilizing.

The only way to bring China to the table for any meaningful arms control agreement is for it to build up its nuclear arsenal to a level where reciprocal cuts make sense for all involved parties. In short, nuclear symmetry perversely requires that China in effect adopts an “escalate to de-escalate” approach to arms control if disarmament is to have any political viability.

There is a historical precedent for this kind of madness. When the Soviet Union deployed the SS-20 intermediate-range nuclear missile in the late 1970s, it unhinged the strategic nuclear balance in Europe. Both NATO and the US were alarmed and pushed for arms control agreements that eliminated so-called Intermediate Nuclear Forces (INF) from the arsenals of both the US and the Soviet Union. In 1979 the US threatened to deploy advanced Pershing II missiles and Ground-launched Cruise Missiles (GLCMs) into Europe to offset the threat posed by the SS-20 missiles. The problem, however, was that while the SS-20 missile was a reality, the Pershing II/GLCM weapons were still in development stage and had yet to be deployed. From a purely political perspective, there was no incentive for the Soviets to get rid of the SS-20.

Instead, in November 1983, the US and NATO were compelled to go through with the deployment of Pershing II and GLCM missiles to Europe, triggering social and political unrest in the form of massive protests, and placed the US-NATO alliance under considerable stress. Besides, by deploying these new weapons into Europe, the US changed the very calculus of war — the Pershing II, once launched, was less than 10 minutes flight time from Moscow, reducing the time the Soviet command would have to react in a time of crisis regarding the initiation of a general nuclear war.

In the end, the US and the Soviet Union signed the INF Treaty, eliminating the SS-20, Pershing II, GLCM and other nuclear delivery systems, and in doing so heralded a new age of relations between the two sides that helped bring about the end of the Cold War. But the world had to be led to the edge of a nuclear abyss before reason could prevail.

Today the US and Russian strategic nuclear arsenals are capped at 1,550 nuclear delivery systems each by the limits set forth in the New START Treaty. While both sides recognize the desirability of additional reductions, the insistence on the part of the Trump administration that any future arms control agreement on strategic nuclear weapons must include China has thrown a monkey wrench in an arms control process which for decades has been governed on the basis of US-Soviet/Russian bilateral agreements. Even something as simple as extending the existing New START treaty for five years in order to buy time for the complexities of transitioning bilateral arms control structures into a new trilateral reality is unacceptable to Washington.

As insane as it might appear, the Trump approach might provide the only viable path forward regarding the possibility of meaningful trilateral arms control between the US, Russia, and China. As things currently stand, the failure to extend New START will eliminate constraints on the part of both the US and Russia when it comes to fielding new strategic nuclear weapons. This alone is a destabilizing and dangerous reality which, left to its own devices, could lead to a new nuclear arms race which would make those of the Cold War pale in comparison in terms of capability and lethality. The wild card in this equation is China. As things currently stand, the small size and relative lack of sophistication of China’s existing strategic nuclear arsenal make it a virtual non-player when it comes to discussions of symmetrical disarmament based upon historical TRIAD constructs (where strategic nuclear capability is spread among manned bombers, land-based ICBMs, and submarine-launched ballistic missiles.)

China’s current nuclear force structure is heavily weighted toward intermediate-range missiles. However, any nuclear modernization program that saw China develop a viable TRIAD-based nuclear deterrence capability would not only compel both Russia and the US to take into account a Chinese strategic nuclear threat when building their respective post-New START nuclear force structure, but also create real political incentive on the part of all three nations to take the off-ramp from a path of nuclear posture escalation and instead embrace the de-escalation of trilateral arms control.

This, of course, is not the ideal situation. Trillions of dollars will be expended by all three parties pursuing weapons whose only utility is to create the conditions for their eventual elimination. But nuclear policy historically has not been the purview of sane and rational thinking — one only needs to refer to the deterrence model of “mutually assured destruction (MAD)” to make that point.

In the early 1980s both the US and the Soviet Union knew that to escalate tensions by deploying new INF weapons into Europe was an inherently dangerous gambit. Indeed, on at least one occasion it nearly triggered a general nuclear war. But in the end, it was the only politically viable path toward eventual disarmament and the normalization of relations between the US and the Soviet Union.

In the dangerous waters of a post-New START world, perhaps the only way to navigate clear of the rocks and shoals of nuclear conflict is for China to escalate its development of a viable strategic nuclear force in order to enable the kind of meaningful trilateral strategic nuclear arms control the world needs to survive.

0 thoughts on “In a world gone mad, China must build MORE NUKES to make disarmament possible”