HOME / WORLD / Yalta 2.0? Why US Military Analysts Urge Biden to Avoid Standoff With Russia, China at All Costs 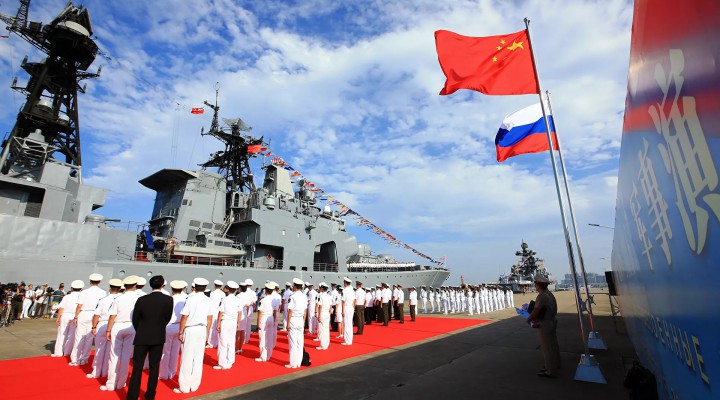 Ekaterina Blinova- Although Joe Biden has set the competition with Russia and China as his administration’s top priority, US foreign affairs experts and retired military are increasingly warning Washington against pursuing military adventurism. US economist Dr Paul Craig Roberts and CIA veteran Philip Giraldi have explained the new trend.

The US is incapable of taking on China and Russia simultaneously, warned David T. Pyne, Esq., a former US Army combat arms and HQ staff officer with an M.A. in National Security Studies from Georgetown University in a recent op-ed for The National Interest.

Furthermore, Washington is unprepared to fight “even a purely conventional war” with Moscow and Beijing, let alone an all-out nuclear confrontation, according to Pyne. He lamented Washington’s decision to expand NATO into Eastern Europe in the late 1990s, insisting that it was a strategic mistake as it pushed Moscow and Beijing into each other’s arms.

Washington's high-risk policy of military brinkmanship with Russia and China could end in the unthinkable, David T. Pyne warns. https://t.co/2rGwEvAVeC

Similarly, Edward Geist, a policy researcher at the RAND Corporation, predicted a military defeat for the US should it fight Russia in Europe or China over Taiwan, while Assistant Secretary of State for European and Eurasian Affairs A. Wess Mitchell insisted in August 2021 that “avoiding a two-front war with China and Russia must rank among the foremost objectives of contemporary US grand strategy.”

This is a disturbing detail in @NickKristof's column on Taiwan: "I’m told that in 18 of the last 18 Pentagon war games involving China in the Taiwan Strait, the U.S. lost. " https://t.co/wxWz42UHiN

For his part, Daniel Goure, former director of the Office of Strategic Competitiveness in the Office of the Secretary of Defence from 1991 to 1993, has raised the alarm over the incapability of US ground forces to outperform their Russian peers in a hypothetical conflict in Europe.

According to the former combat officer, America’s “outdated pursuit of hegemony” should be replaced with “strategic retrenchment” and “offshore balancing”. Pyne suggested that “a scaled-back US military presence overseas” would “greatly reduce the impetus for Russia and China to ally with each other to balance against the United States”. On top of this, he proposed negotiating a global spheres of influence agreement that safeguards vital US interests.

“Much like the 1945 Yalta Agreement, a global sphere of influence between the United States, Russia, and China might have similar success for the entire world”, the retired military officer emphasised.”

Yalta 2.0 appears to be nothing but academic rhetoric, deems Dr Paul Craig Roberts, a former Wall Street Journal editor, ex-assistant secretary of the treasury under Ronald Reagan, and former member of the Cold War Committee on the Present Danger. However, the aforementioned US military analysts “are correct that Washington is no match for Russia and China”, he says. What’s more “the US is spread too thin in its ambitions to be a match for anyone”, Dr Roberts remarks.

“The US military is in a state of rapid decline”, he says. “The huge budget goes largely into ‘cost overruns’ or profits for the armaments industry and results in costly but second-class weapons systems”.

The main problem, however, is the morale of American troops, according to the former Reagan administration official. He argues that wokeism has infested the Army, Air Force, and Navy, with white male troops being forced to take “racial sensitivity training”. Simultaneously, promotions for white men are on hold for the purpose of achieving a “balance” by promoting African American and women, further undermining respect and mutual trust among US military servicemen, he says.

On top of this stands Chairman of the Joint Chiefs of Staff Gen. Mark A. Milley, who botched the Afghan withdrawal and who told his Chinese counterpart that he would give him advance warning of an American attack in the final months of Donald Trump’s presidency, Dr Roberts summarises. Many in the US Armed Forces feel betrayed by the Biden administration, according to the former Reagan official.

“The obvious conclusion is that, the quality of weapons systems aside, such a demoralised military has no capability of fighting disciplined forces of good morale”, Dr Roberts says. “Washington has no possibility of fighting both Russia and China together and would be quickly defeated by either separately”.

Neither Russia Nor China Wants War

What’s more important is that neither Russia nor China intends to attack the US, the former American official underscores, adding that “much less does Moscow want responsibility for Eastern Europe”.

“When Washington identifies Russia and China as threats, Washington means that the rise of the two countries has ended Washington’s short-term unipolar rule”, Dr Roberts says. “The ‘threat’ that Washington is concerned about is the loss of US hegemony”.

Yet, that does not mean there is zero risk associated with grand power competition. There is a danger that an American population indoctrinated about the “Communist threat” and Washington’s recklessness, such as putting military advisers in Taiwan, could “result in a provocation that is too big for the provoked country to ignore”, he warns.

“The United States is creating crisis situations with competitors that could lead to war even though neither Russia nor China poses a real threat in military or strategic terms”, notes Philip Giraldi, a former CIA counter-terrorism specialist and military intelligence officer. “This is largely the same crowd that wants the US to be the global hegemon. It is not attainable and is already ruining our economy and turning the nation into something like Frederick the Great’s Prussia, an army with a country attached”.

The CIA veteran refers to the latest article by Stephen Kinzer, an American author, journalist, and academic, in The Boston Globe. According to Kinzer, “cooperation with China and Russia is the only way forward given the mammoth problems the world is facing today”.

My new @GlobeIdeas column: "Biden & those around him insist that our greatest dangers are military & emanate from Beijing & Moscow. They aren’t and don’t. The post-COVID world demands deep rethinking of what constitutes a security threat to the US." https://t.co/y9jT0kPs3O

“It today’s radically altered world… our greatest security threats no longer come from other states”, the American author wrote. “Climate change, pandemics, and the erosion of our own society threaten the United States more than any country does”.

The urgency of transnational challenges requires a new level of global cooperation, Kinzer insisted, adding that cooperation with Russia and China would obviously come with certain compromises on the part of the US. And still, according to him, the pain of these choices “pales beside the prospect of onrushing threats to humanity’s future”.

0 thoughts on “Yalta 2.0? Why US Military Analysts Urge Biden to Avoid Standoff With Russia, China at All Costs”