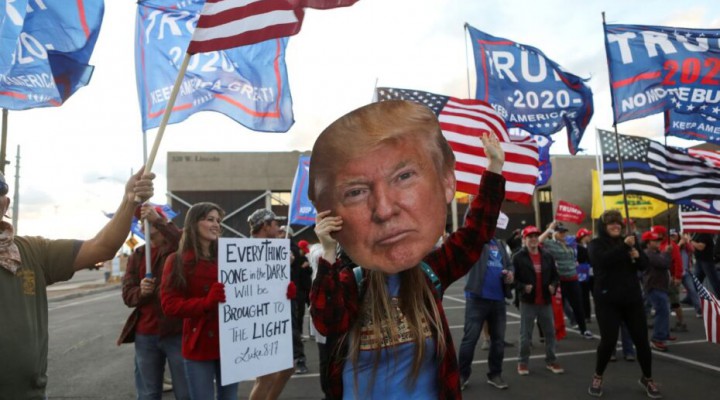 Trump’s adventurism is not overseas, it is right at home. It’s all about trashing the U.S. constitution and installing himself for a second term regardless of democratic mandate. In short, dictatorship.

For the first time in the history of the United States an incumbent president is refusing to concede electoral defeat. Ominously, Donald Trump, the sitting president, has this week also packed the Pentagon’s civilian leadership and intel agencies with political loyalists who are described as his “foot-soldiers”.

The flurry of appointees are former special forces and generals. Here is a profile of the president’s men. One Pentagon insider said of them: “These are the people who go in and do whatever they think is required to achieve his [Trump’s] agenda. They are true soldiers in the war on government, the war on what Trump calls the deep state.”

The shakeup in the military-intelligence apparatus has stunned observers from its audacity. There is speculation that Trump will next sack the Pentagon’s top general Mark Milley, FBI chief Christopher Wray and CIA director Gina Haspel, to be replaced by “true believers” of his Make America Great Again project.

There is an edgy feeling that Trump, a maverick megalomaniac, is actually going for it. That is, a coup d’état.

But this can’t happen here, or so goes the plaintive refrain. Well, it looks like it is.

A stunning bold-faced denial of reality this week came from Secretary of State Mike Pompeo who told incredulous reporters that there would be a “smooth transition”… to a second Trump administration.

Most of the Republican lawmakers on Capitol Hill are refusing to acknowledge publicly that Democrat Joe Biden won the presidential election – despite him gaining a decisive lead of more than five million votes over Trump as well as in the all-important Electoral College votes.

Trump-appointed Attorney General William Barr is brazenly politicizing the justice department by endorsing Trump’s calls for investigations and lawsuits over allegations of voting fraud and other purported irregularities. There is negligible evidence to support these allegations, many of which have been thrown out already by state judges as frivolous. But Barr is giving inordinate authority to shore up what amounts to tittle-tattle from a sore loser.

State election officials, both Republican and Democrat, have unanimously reported no significant electoral fraud or malfeasance.

Republican city commissioner in Philadelphia Al Schmidt, in the key swing state of Pennsylvania which was won by Biden, confirmed there were no voting irregularities. He was then denounced as “disloyal” by Trump. Schmidt also claims to have subsequently received death threats.

Strangely, too, Trump and Republicans in Congress aren’t complaining about fraud in the down-ballot votes for the House and the Senate races where they performed relatively well in gaining or holding on to seats. Even though those ballots were cast in the exact same process as the presidential vote. How can one item on the ballot sheet be prone to fraud, but the ones which suit Republicans aren’t? It’s self-serving duplicity that’s what it is.

What Team Trump is betting on is not winning litigation over the election results. There is not a chance of the president overturning the large majorities that Biden won in key swing states. No, the game plan seems to be to cast doubt on the legitimacy of the elections and run out the clock so that Republican legislatures in states like Pennsylvania, Georgia, Wisconsin, Michigan and Arizona do not certify Biden as the winner of the popular vote.

Moreover, it is being mooted that Republican legislatures in these states will appoint electors to the Electoral College who will nominate Trump as the winner, in defiance of the popular vote. The Electoral College is to convene on December 14 when the deciding vote is cast on who is to be next president. Tradition and precedent holds that the state electors respect the popular vote, but this election is unprecedented. It is not unthinkable that Trump will continue insisting that the election was stolen from him by citing (baseless) fraud claims. For many of his 72 million voters, there is a shared conviction (delusion) that the election was rigged or absurdly contend that the coronavirus was “weaponized”.

Biden won over 77 million votes in the popular ballot. If Trump goes for barricading himself in the White House claiming he is the rightful winner, then the U.S. faces a constitutional nightmare scenario. Widespread violent protests are on the cards, if not civil war. Already Trump hacks have prepared the propaganda narrative that any protests against Trump are the work of “Antifa subversives” and “Marxist terrorists”. We saw that outlandish narrative being wheeled out during the recent months of legitimate massive protests against racist police killings.

As tensions boil over in the run-up to the presidential inauguration date on January 2o, what Trump and his cadres will declare is a state of emergency and martial law to “protect the nation” from leftists and “deep state” orchestrated “color revolution” against a “democratically elected president”.

This is the significance of the shakeup at the Pentagon and intelligence apparatus this week. Trump is putting in place the kind of fascist operatives to carry out his coup d’état.

Ironically, Trump claims he was the target of coup forces from the deep state after his 2016 election victory over “swamp creature” Hillary Clinton. To be fair to Trump, that effort to unseat him was real enough, centered on baseless “Russia collusion” claims that dogged his entire presidency. However, that coup attempt failed. But now another seizure of power is underway this time hatched by Trump himself and his cronies.

Biden and his Democrat party are being sheepishly complacent about the dramatic and daring power grab taking place by Trump. Biden this week sought to sound calm and cool, saying that Trump’s refusal to concede defeat was merely “embarrassing”. Biden really is being “sleepy Joe” if he doesn’t realize that there is a coup going down in the White House.

Another sign of complacency was from the New York Times which headlined: ‘Trump Stacks the Pentagon and Intel Agencies with Loyalists. To What End?’

The NY Times answered its question by speculating Trump was planning overseas adventurism, perhaps a military attack on Iran or a rushed withdrawal of troops from Afghanistan.

How stupidly complacent. Trump’s adventurism is not overseas, it is right at home. It’s all about trashing the U.S. constitution and installing himself for a second term regardless of democratic mandate. In short, dictatorship.

MAGA was far more mainstream than most Americans realized, and its electoral rejection will prove to be a historic mistake

0 thoughts on “Trump Doubles Down on Coup D’État”