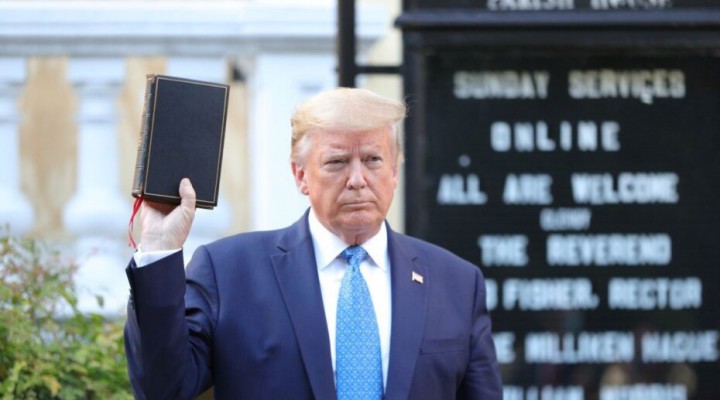 But Trump’s prospects for leading a rival U.S. administration for any significant length of time are dim.

With Donald Trump failing to concede his loss in the U.S. presidential election and some of his aides suggesting that he will conduct a counter inauguration and swearing in to rival an official inauguration of Democrat Joe Biden as the 46th President of the United States on January 20, 2021, there is a distinct possibility that the United States will be plunged into political anarchy not seen since the U.S. Civil War of the mid-19th Century.

Even as Biden continued to rack up votes in Pennsylvania, Georgia, Arizona, and Nevada, Trump tweeted and told aides that he would refuse to concede the election, hold periodic campaign “Make America Great Again” (MAGA) rallies across the country, refuse to depart from the White House on January 20, and even suggested he might stage a rival inauguration in January as Biden is sworn in as president on the west façade of the U.S. Capitol building.

The establishment of rival governments has generally never been successful for the illicit claimants to power. Perhaps the most well-known rivalry for power took pace in the 14thCentury when seven successive rival Roman Catholic Popes claimed the papacy from their Holy See capital in Avignon in the Kingdom of Arles, then part of the Holy Roman Empire. In 1302, Pope Boniface VIII, in a papal bull issued in Rome, declared that “every human creature be subject to the Roman pontiff.” That constituted a direct attack on King Philip IV of France, who refused to bow down to the dictates of the Roman Pope.

In 1303, Italian allies of King Philip broke into the papal residency in Rome and severely beat Pope Boniface as he was preparing to issue an edict excommunicating the French King. The Pope died shortly thereafter and was replaced by Pope Benedict XI, who absolved the French King of any wrongdoing. Benedict died after eight months as Pope and was replaced with the pro-French Pope Clement V. In 1305, in order for the French King to wrest the papacy away from the influence of powerful Roman families, seven successive French Popes all resided in Avignon. That was until Pope Gregory XI decided to move the Holy See back to Rome. Three French claimants to the papacy, called “Antipopes,” continued to reside in France after Gregory moved the papacy back to Rome in 1376. In 1378, the French Cardinals of the church revolted when the papacy in Rome returned to an Italian, Pope Urban VI. The French Cardinals recognized the French Pope Clement VII as the pope in Avignon. The period of rival Popes and Holy Sees was called the “Western Schism” and the “Babylonian Captivity.” The schism did not end until 1417.

Some religious historians point to the rare case that there are currently two living pontiffs, Benedict VXIII, who resigned the papacy in 2013 amid a Vatican pedophile scandal, and his replacement, Pope Francis I, the first Jesuit pontiff in the history of the Church. Benedict, who has continued to involve himself in conservative Vatican politics from his apartment in the Holy See, has found himself challenging many of the liberalized decisions of Francis. The schism has revived the enigma, in some Catholics’ minds, of the 14th Century Popes and Antipopes.

If Mr. Trump were to stage a rival, but unconstitutional, inauguration as “president” on January 20, 2021, a president and anti-president situation might unfold, similar to the Western Schism of the 14th Century in Europe. Monarchical history of Europe and other countries is replete with cases of rival claimants to thrones, but the situation is quite rare in democracies, where leaders serve according to the wishes, expressed in elections, of the people. However, there have been cases where two political leaders, both claiming victories in elections, have become rivals for the presidency.

In December 2001, Madagascar incumbent President Didier Ratsiraka claimed victory in the presidential election. On February 22, 2002, supporters of Ratsiraka’s opponent, Marc Ravalomanana, rallied to their candidate’s support after he declared himself the victor over Ratsiraka, who was accused of widespread cheating. Ravalomanana proceeded to name an alternative government to that of Ratsiraka’s. As the mayor of the capital city of Antananarivo, Ravalomanana had the infrastructure to appoint a rival government. After Ravalomanana swore himself in as president before a crowd of 750,000 supporters, Ratsiraka declared a national state of emergency. Since neither candidate had achieved an outright majority, the election had been heading for a run-off on March 24, 2002. During the interim, Madagascar had two rival presidents, both claiming control over the nation. Fighting broke out between supporters of the two would-be presidents. Ravalomanana’s forces took control of Antananarivo and Ratsiraka and his forces retreated to Toamasina, on the east coast of the island nation. The United States, Germany, and France recognized Ravalomanana as the legitimate winner of the December 2001 election and the rightful president of Madagascar. In July 2002, with Ravalomanana’s forces bearing down on Toamasina, reportedly with the help of French forces who helped capture the key port of Diego Suarez from Ratsiraka’s loyalists, Ratsiraka and his family fled to Seychelles aboard an Antonov plane owned by Ratsiraka’s son, Xaxier.

Could such a scenario play out in January in the United States? If Mr. Trump fails to leave the White House at the constitutionally-mandated hour of noon on January 20, 2021, he and his family and staff would be physically removed from the Executive Mansion by federal law enforcement officers. President Biden would be free to move into the White House and take up his post in the Oval Office. Trump may decide to forgo such a public humiliation of being placed under arrest and stage a rival inauguration at his private club at Mar-a-Lago in Palm Beach, Florida, in the hope that Republican officials, including Florida’s Republican governor and two U.S. senators, as well as other Republican officeholders, pro-Trump county sheriffs in Florida, and a few Trump-appointed federal judges, might be in attendance.

Trump may also decide to seek the support of wealthy right-wing Cuban, Colombian, and Venezuelan interests in South Florida to help defend his rival administration, taking a cue from Venezuelan National Assembly leader Juan Guaido, who, on January 23, 2019, declared himself the acting president of Venezuela in opposition to the re-election on May 20, 2018 of incumbent President Nicolas Maduro. The stage was set for two rival presidents of Venezuela. Maduro accused the Trump administration of fomenting a coup to establish a U.S. “puppet state” in Venezuela. Guaido’s rival regime was quickly recognized by the U.S., Canada, Britain, France, and members of the Organization of American States’ Lima Group of Brazil, Colombia, Peru, Chile, Ecuador, and Bolivia. Russia, China, Iran, Syria, Cuba, Nicaragua, Turkey, and the United Nations continued to recognize Maduro as the legitimate president of Venezuela.

Trump, if he were to establish a rival presidential administration in Palm Beach, might receive diplomatic support from his far-right foreign allies, including Presidents Jair Bolsonaro of Brazil, Ivan Duque of Colombia, as well as Venezuelan “Interim President” Guaido. Bolsonaro’s son, Brazilian Congressman Eduardo Bolsonaro, took to social media to push right-wing conspiracy theories about election fraud in the U.S. presidential election. As of this writing, President-elect Biden had not yet received any congratulatory phone calls from Trump’s international allies, who, in addition to the Latin American neo-fascist leaders, included the prime ministers of Hungary and Slovenia and the president of Turkey.

Trump’s prospects for leading a rival U.S. administration for any significant length of time are dim. Ratsiraka returned from exile to Madagascar, but he agreed to refrain from active politics. Guaido has been discredited after a failed U.S.-backed coup in Venezuela – the May 2020 Operation GIDEON – and his squandering of large amounts of international aid money for personal benefit.

There have been rival claimants to presidential palaces following contested results of elections in Kenya, Malawi, Benin, Guinea, Nigeria, Guinea-Bissau, Cote d’Ivoire, Niger, Togo, South Sudan, Djibouti, Maldives, Gambia, Afghanistan, Guyana, Belarus, and several other countries. However, these elections have largely been in developing democracies and have been marked by violence and bloodshed. It remains to be seen whether Mr. Trump and his supporters are willing to go that far in striving to retain a spurious claim for control of the U.S. Executive Branch of government. If they do, the United States may descend into the type of civil strife not seen since t Civil War between the Union and the Confederacy.

Putting the Pieces Together, an Intel Drop